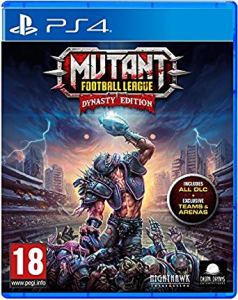 Cards on the table, I helped Kickstart this game. I paid a not inconsiderable amount to have myself put in the game, that due to me actually forgetting about kickstarting, my player was named after my former band (Black Moon Rising) and plays for the Microhand Mutilators.

It was around 5 months ago I randomly logged into Kickstarter that I discovered I had paid for Mutant Football League, and the game had actually been released. At this point the helpful guys over at Digital Dreams sorted me out with my PS4 code to download the game, and said they’d update my players name the next time the did a patch. It then took me a good few months to download MFL  as I don’t connect the PS4 to the net often, and then it took me a bit longer to get round to play it as I was never actually a fan of the original Mutant League Football or the Hockey one.

So after much faff and preamble I finally took a dive into MFL.

Ok, so Mutant Football League is ostensibly an American Football game. You play against your opponent making plays in offensive and defensive formations attempting to score touchdowns and you build you team with the typical American Football positions such as Quarterback and urrrrhm, I don’t know. I know literally nothing about NFL except the highlight of the season is a half-time show. Here is the biggest flaw to me, all the positions in MFL are puns on real positions and teams, but as a nub I don’t know what the pun is. 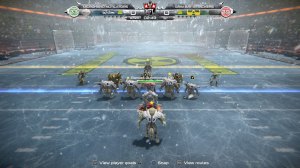 Silly people playing in the snow

As nothing is explained it has a slightly awkward learning curve as you try to get your head around, my guess its sports fans my find this introduction easier. Mutant League could address this and suddenly appeal to a much wider audience than the Madden Bro, as MFL is stupidly fun. Seriously, I have played it none stop for 2 weeks. The first day or two I sucked balls. I lost every game, barely keep the ball for more than 10 seconds. But the game started to make sense. And I finally thought I’d try the Career Mode as that allows you to unlock some of the special teams. 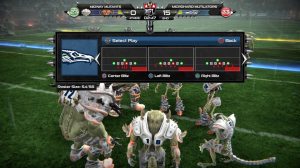 pick a play, any play

When I started the Dynasty Mode I obviously picked Microhand Mutilators so I could play with my insert character a defence man of some sort, I then proceeded to spend almost my entire budget of 120,000,000 Monster bucks (unsure of the currency) on Quarterbacks (didn’t realise each position was a different screen). Turns out that was the best decision I ever made. Game 1, 2, 3 were blowouts. I lost badly. Black Moon Rising the werewolf defend-ey dude is not very good and the overall awfulness of the team I selected didn’t help, but I persisted. (In Dynasty mode Microhand Mutilators started off as worst team). With the Quarterbacks settling in though I was able to start landing passes and suddenly I was’t losing 30-0, but losing 15-10 and scraping some wins. With the little money I was able to scrape I bought myself a kicker as mine couldn’t kick a ball more than 10 yards, and a receiver. Suddenly I was able to win some more games, and my second half of the season turned around with a 4 win streak in the last 4 games. Suddenly, Microhand Mutilators had Mighty Ducked their way into the playoffs! 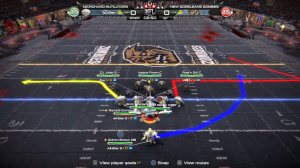 These games were tough. First game was closer than the score suggested but the Mutilators had some luck and dodgy ref decisions that went my way but ended around 20-7. Second game I won 18-15 with a 30 yard field goal in overtime and then the Mutant Bowl I lost. Because, well, the other team killed all my Quarter Backs… 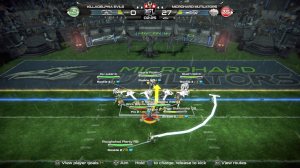 Why kick for one point when you can be greedy and go for two?

I didn’t mention that earlier did I? You can straight up murder opposition players and it is hilarious. You have a “dirty trick” category of plays, these include, bribe the ref, kill the ref, kill the quarter back, plant a bomb in the ball, take steroids, or pull out a shotgun. These moves can be negated, and are limited in use (only once a half) , so you can’t pick kill quarter back every move but you can also kick and stomp players that are down. If you sack a quarterback you can bring the pain before the next huddle with some late hits and kicks. Meaning well timed attacks, good defensive work and some casual ref bribing can seriously put the game at risk for the other players. Some teams will excel at this due to the monstrous size of their defenders (I bought ALL of the big lads for season 2). So bribing the ref, and then killing a quarterback will result in no punishment. The other team will then choose to kill the ref as punishment, and suddenly you have gone from the opposition being 1 and goal on 4 and 40 as the ref punished the opposition for dissent over you killing a quarter back and for then killing the ref and a dead star player. 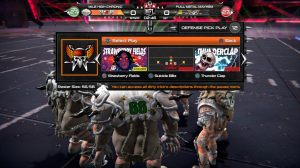 These Dirty Tricks are a great laugh and they do take getting used to. The first 5 or so games you feel like the game is cheating you, these tricks happening and screwing you over in your football match. But at some point you remember you have them, and the “cheating” is both tactical and encouraged. I am a big fan of dropping the bribe ref early. If you make a mistake and the opposition scores, the ref will give you a call for spurious reasons, the subsequent killing ref will change that section of play back in your favour. I’l pop the shotgun trick and kill 3 or 4 defenders. Suddenly the opposition is in damage limitation mode and can’t quite go so balls to the wall as small mistakes let you through and sack the QB resulting in more key players dying. 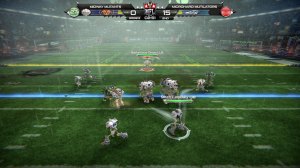 Therefore MFL has all the tactical intrigue of real American Football, but none of the dull slow ass tedium of dragging an hour long game into 5 hours. Each game is 12 minutes and with the stops tend to last between 15-20 minutes. Plays are managed with hot buttons so you can quickly access your plays and tricks, with a 20 second timer for multiplayer to stop douche baggery and slow play. 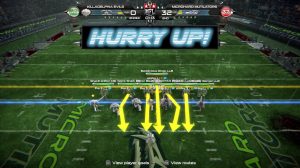 Overall I really enjoyed MFL, but the appeal is somewhat limited. Beyond playing a few seasons there isn’t much to hold your attention if you’re somebody who primarily plays singleplayer. You’ll be able to find online matches as the online community is pretty active, but as a late comer you’ll struggle and get a pummelling. So it depends on where your interests lie. As a game to play with a mate in local co-op it is brilliant, in Solo play it is a great laugh too. But since I was able to win the league undefeated in my second season there isn’t much left except to keep cranking the difficulty. Again, this is up to you. I’ll certainly give it a go, but I am unlikely to keep cranking it to the point I understand American Football.

I still think the fundamental issue with most sports game is they are not inherently fun with too much emphasis on simulation, and Mutant League eschews all of this boils the core concept of American Football in to fun, small digestible chunks and adds pretty bells and whistles on top. Sure a football-douche will find faults in the realism, but on the whole you’ll enjoy it.

MFL was only released in 2018, but not that many reviews seem to exist for it. A scan over at Metacritic shows the PS4 has a critic score of 63 and a 7.4 from fans. So my score isn’t too far out of that.

The main criticism was the longevity. Which is fair.