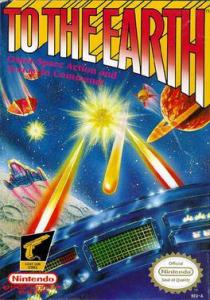 A while back I did a top light gun games list and encouraged people to drop us a line if they knew any Light Gun Games that had a PAL release that I hadnt included in that list. And so far, the only suggestion is this, To The Earth. To be honest I had never heard of it, and since it is the NES I expect a relatively dull gallery shooter.

Holy fuck was I wrong! I expected a game like Duck Hunt or Hogans Allet type game where you get one or two enemies on screen at a time and you have to react. What To The Earth is, is a fucking bullet storm Space Invaders-esque game. Each mission is you heading from the outer rim of the solar system,  starting at Uranus, then to Saturn, and so on heading to Earth.

Pretty hard to take a decent screenshot to be honest

Each level has you facing a none stop barrage of enemy fighters and their projectiles. This isn’t sedate, it is fast shooting that Time Crisis 2. It you shoot a ship down before it fires you dont have to deal with anything it has shot at you. React too slowly (.2 of a second and they’ll launch missiles at you. Of these connect you’ll take damage to your shield. Lose your shield and get hit, you’re dead (with continues). That’s kinda it. Each level has a sort of boss that are all pretty easy compared to the insanity of the bullet storm on the levels.

Dont shoot this guy, trust me…

Taken from the boxart and manual (and wilipedia)

It’s 2050. The Ragossians have invaded the earth with a dastardly bacteriological weapon! The human race is facing the danger of extinction. You are on a special mission to bring the antibacterial agent from the Neptune-Terrestrial Allied Force base, ‘Triton’, to the Earth. You must break through the invaders’ cordon. Time is limited! The fate of the earth is in your hands. Save it!

You also get a epilogue

The shooting is accurate, but the issue with the shooting is that the Nintendo Zapper isn’t really designed for such frenetic shooting. The trigger is hard to press, as well as noisey, both of which mean playing the game is a bit of an attrition test. Thankfully each level has a couple of breaks in play as there is no pause button but the bigger issue is the gun actually cant keep up with the shooting. So those three missiles that are fired at close range you can only react to 1 of them. Again, this is is a limitation of the Nintendo Zapper but the developers should have planned for that when making it.

Shoot the red thing to clear the screen

There isn’t much else to say about the game to be honest. It is a light gun game, you point a plastic gun at a screen and go zzzzzap, zzzzap… the shooting is accurate, the shooting is frenetic. The problem is the technology can’t keep up with with the speed. And that is a shame.

If the tech could keep up with the idea as a light gun game this would be one of the best maybe not challenging Time Crisis 2, but certainly top 10 Light gun games. As it is with the flaws they do affect the overall experience.

If you find it cheap like I did then it is well worth a bash.

Only review on Wilipedia gives it 36%!