I really didn’t get on with Civilization III, it wasn’t a bad game, but it was fucking boring in end-game and the difficulty was a bit all over the place. So rather than dwell on it, and let CIV3 sour my opinion on the series I thought I’d dive straight to the sequel.

CIV4 follows the template set out in the previous versions of the game, but if you have not played them expect a turn based strategy game where your focus is on growing a civilisation from a mud-hut into a global super power. This ostensibly makes CIV4 a 4X game as the primary way of doing this is a mixture of explore, expand, exploit and exterminate with increased emphasis on diplomatic relations. With the other victory states coming from methods such as war, culture, and scientific research leading to the winning the Space Race and abandoning the shithole planet you screwed up.

The obvious change from previous games (including Alpha Centauri) is that the semi-realistic Isometric graphics have been replaced with more stylised three-dimensional cartoon graphics, you are no longer dull, dry, Queen Victoria, you’re a kooky Mahatma Gandhi or Teddy Roosevelt and your game. With this change CIV4 looks much better than previous entries and the graphics hold up much better than previous editions which could often appear a bit muddy and washed out with shades of brown.

But the other big thing you should notice from playing for 5 minutes is that CIV4 is much MUCH friendlier and easy to learn then CIV3. Options such as adjusting the difficulty still exist to allow you to learn the game, but big difference for me is the actual process of learning the game is no longer teeth-grindingly tedious. In CIV3 I had to continually tab out the game and read the wikia to figure out what things do. Here, everything is immediately presented to you, and if it isn’t, it is a right-click. That is it, you don’t know what something is, right-click it.

I think I won this game…

Other interesting changes on the previous games is that troops now receive upgrade choices, winning battles will promote your unit much like the previous game(s), but now you get a choice of upgrade options. Do you want the unit to be 10% at fighting in all combats, or something more specific, like 25% better at defending hills or 25% at defending cities. Or more passive buffs such as the ability to help with restoring health of nearby units. Sure you could put all points into 10% strength and end up with 30% boost, but you will still find yourself losing to that one fortified archer unit that is sitting on top of a hill and has a hill defense upgrade no matter how much you think you plus 30% strength beat a minimum of 50% buff to defense. With these upgrades to the combat and levelling system it makes these bonuses much more obvious now so you know why you are losing, you know to bring in the big guns or to stubbornly send in round after round of fodder to clear that one target you have decided deserves death more than your 15 units deserve to live.

The Inca’s will probably regret those earlier archer incursions.

If you are making an attack you’ll be given your chances of winning/losing, you can see the cities defenses, or the bonus the unit is getting from terrain on top of their ability. It means you are no longer left screaming at your screen as a lone ancient warrior kills wave after wave of Medieval Knights because the game says so. The triangle of A beats B, B beats C, C beats A suddenly works where as in CIV3 this never seemed to be the case in 20+ hours of playtime.

But it isn’t just the combat that has been tweak, I still don’t really believe it is possible to win by means other than War in CIV3 but here with the tweaks each victory is manageable but they also provide changes to the gameplay. Diplomacy is fun in CIV4, you can form alliances start wars, demand techs and help like in the previous ones, but the diplomacy contributes to wider activities beyond the conversation screen. You can bully lesser nations, you can form bonds with leaders based, religion, or form of government, and on your actions to them and the other 3rd party factions. Allowing trade with their mortal enemy might annoy them a little, but not so much as allowing them military passage and from the diplomacy screens you are able to see your relationship with each leader. Seeing what you are doing right and wrong with each of the factions allows for some slightly more Machiavellian tactics as you try to Petyr Baelish your way to the Iron Throne, as you convince the Americans to start a war with the Russians so that you can sweep in and capture Washington D.C as they move their tanks to the front line. Of course these features existed in previous games, but they never really seemed to quite work. 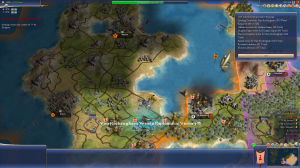 The turkeys voted for Christmas

Returning are the myriad of different controllable factions, each with their own unique twist. Some factions are given the choice of different leaders, so America and England both get 2 leaders each, whereas other nations might be restricted to single leaders. These leaders will make early days focus a little different, and while they won’t lock off certain victory routes it will make winning certain conditions significantly harder. I for one can’t win a cultural victory regardless of who I pick.

CIV4 reintroduces the overarching tech-tree with everything being interconnected. It means you need Animal Husbandry to research horseback riding, but you also need Horseback Riding for some magical technology later on. In CIV4 it means everything is interconnected and you can’t just make a beeline for Nukes without getting Physics and rocketry with this sensible tree structure it means it lacks the awkward 4 distinct eras that CIV3 had.

I hated getting to mid to late game in CIV3, and to be honest my past experiences of CIV2 were not much better (I had PS1 version). The issue was the game ground to an absolute halt, watching 38 workers moving a square, watching 70 nearby enemy workers moving a square, Here, workers are all but invisible unless you select them, and you are only informed of actions on the world map that are related to you such as invading forces. The other big issue that has been resolved is that turns don’t suddenly end mid movement, in CIV3 if you clicked fortify or moved the last unit the turn would end. You had no knowledge that unit was the last unit, and you wanted to go select another unit. Here, if all units have been moved the game tells you to end the turn. It means you can go looking for those stationed units. This perhas wouldn’t be such an issue in this installment since you are no longer waiting 5-10 minutes for the AI units to do their turn, meaning you are less likely to forget about the 5 armies stationed in outer-Siberia. 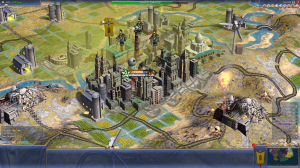 Did you know Timbuktu completed the Manhattan Project in the mid 1950s?

Research also just works. I played several different games trying different strategies, funding options, and my research always moved along I never felt like I was struggling or not researching an optimum path for the sake of moving to the next tree, but carving an optimum path to what I wanted (nukes, it was nukes). I might not have always been most advanced, but again, to compare to CIV3 I would often hit 1900 and still not have gunpowder. Here I can win Space Race by 1945, I can be stealth bombing Moscow by 1915, hell, I had one game where I built 30 nukes, became head of UN, banned Nukes and then nuked almost every city on the planet. You can make the game more challenging, smaller maps, more enemies, larger maps fewer enemies, they all affect game play significantly, and then you can ratchet up the difficulty slider or only allow certain types of victories.

Being the worlds only nuclear superpower didn’t stop nuclear war…

CIV4 biggest strength is that it caters to different play styles and a result you are much more inclined to try for a stupid cultural victory with a culture less heathen. One of these driving factors is that games can be fairly quick, as if you know it will be over in 5 hours your prepared to try something new, or that you can bunker down and spend 23 hours slowly conquering the realm as these new features, tweaks, and changes, all encourage different styles. This balance of casual play and depth is phenomenal and really increases the longevity of the game. I now understand why nobody talks about CIV3 it wasn’t bad but it was boring.

CIV4 was never boring. I would hop in and out of different games, i’d research things in a different order, i’d revisit old files where I had won or lost and change my priorities to see how the game panned out differently. So if you can play CIV4 you should. It isn’t often I’ll play a game solidly for 2 weeks barely sleeping and come out of it the otherside thinking it was worth it. I bought Sekiro during this time and spent roughly 30 minutes playing that and well over 70 hours 2 weeks playing this with a few days playing it for well over 10 hours.

Cons: It is in same series as CIV3

CIV4 was released to critical acclaim with most reviews in the low to mid 90s winning a number of awards such as strategy game of the year, as well as more prestigious ones like PC game of the year. The only criticisms seemed to be levelled at the multiplayer which many considered to be clunky.