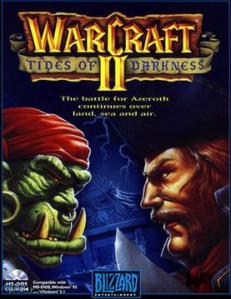 I first played Warcraft II around 1998 having borrowed the disc off a friend and installed it on my dads work laptop. It was one of the chunky laptop with a rubber mouse dot built into the keyboard, a Hard Drive that didn’t top 5gb, and had as much RAM as a two-legged hamster. I didn’t beat the game back then and to be honest got sure how far into the game I got, because that particular laptop was one of those old ones where if you drained the battery fully the bios would wipe. So one day, during a particularly long session where I forgot to turn the plug on I managed to brick the laptop and lose my dad’s work, but more importantly, lost my save files. Unsurprisingly my dad didn’t let me near his laptop after that either.

Warcraft II is a real time strategy, but unlike the Command & Conquer games rather than the collection of one resource, you are tasked with collecting 3, with a “forth” in housing stock. You need to build Peons/Peasants who will go collect Wood by chopping down trees, Gold from Gold Mines, as well as Oil from Oil Fields out in the sea with various combinations of these resources used to build your army.

If you ever played the first game, Warcraft II is a far superior game. The first game is simply archaic with clunky controls that make playing the game a chore. I won’t go into too many details here, as you can read the Warcraft review if you are interested.

In Warcraft II the UI has been overhauled from the previous entry. You can now scroll around the map like any sensible RTS with the mouse, you can select more than 4 units at a time (only 9 though), double clicking on a particular unit will select all of the same type on screen as you clicked, you can assign squads to short cut keys, and  the theatres of war have been expanded to include both Navel and Aerial Warfare.

To incorporate the oil fields almost every level takes place on a series of islands. This requires you to build up sea forces to both defend your assets, attack enemy defences, and transport your troops to the next island. It is frankly tedious as it just adds another pointless ingredient to the mix which is compounded by the lack of resources. Except Oil, that shit never runs out. 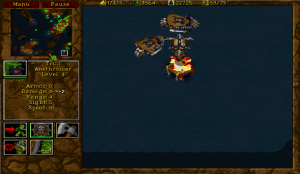 The limited resources on each map creates several smaller issues for me:

Start on the back foot: starting on the back foot isn’t so much an issue but if you don’t get your defence nailed on in the 1st attack then you might as well quit and reload. The amount of gold available on the map isn’t enough for you to repel and rebuild, allowing for a slow battle. You need to rush the enemy. If you don’t you will simply reach a point in the level where you can’t win. On several maps I had all but destroyed the enemy, but my last unit died, and they had one crossbowman left and a farm. I had nothing left on the map that could attack. Another time, I destroyed the enemy base, but they had half dozen units left and I had nothing, I had to quit as they were able to walk to my base and very slowly raze my buildings. 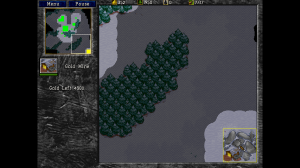 I know this is level one, but look how shitty that mine is!

Can be too hard: Starting off on the back foot, and the limited resources means you need to know each map perfectly. If you don’t know the map, the attack patterns, the ambushes, and how to counter then you will lose a unit or two. With the limited resources this means that such a small mistake early on will punish you and fuck you over long term.

One failed attack will require a reload: If that one attack you spend the game building up for fails, then you need to start again. Don’t reload just before the attack, start again. All the vantage and pinch points, and what units the enemy will be using. If you go half cocked on any level you will lose a few troops, take a bit of unnecessary damage you will die. Learning these patterns and exactly how to approach a level is very much learn by rote. You need to play the level 3 or 4 times to learn all these nuances. It starts to feel like Earcraft II is more of a puzzle game at times as you need to chain this knowledge together it never feels to me like a game of tactics, it feels like I’m having to contract a jigsaw piece by piece before being allowed to get to the strategy elements. 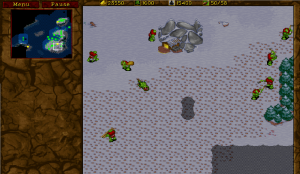 Trees provide defence, until you deforest the entire map.

All of this eventually leads to me cheating. I don’t mind the tactical nature of it, but I hate the almost arbitrary way you need to know the level perfectly. Command & Conquer, especially the Red Alert ones could be challenging, but most maps the amount of ore gave enough flexibility to prod and probe learn the map and beat it on one attempt. You could get things wrong on a level and adapt. Here, make a mistake and it will often prove too costly. None of this is especially helped by the slightly clunky secondary moves, if you have Wizards, you need to click on individual units in order to cast it’s spell. Try individually finding your magic casters in the midst of a battle with no way to universally cast the spell. It turns potentially dangerous units like the Ogres, into borderline mediocre ones as you struggle to click each one, click the attack, and target an enemy, then find the next one, and repeat. Sure, an autistic teenager will be able to do that, and if you watch the pros who play StarCraft they’ll do the same, clicking 784 times in a minute issuing commands and spells, but for the rest of us it is too much of a pain. The only way to counter this is to play the game on super slow mode. Adjusting the gameplay speed is an option, but to give you the speed where you can issue these commands will mean the game being unplayable slow as you wait a lifetime for a peasant to chop a single tree down. 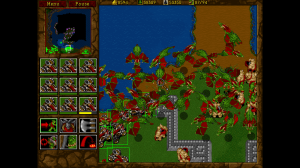 This is before you get to the tedium of bug hunting that one bloody peasant that is hiding behind a tree in the corner of the map before you can successfully finish a mission.

Warcraft II follows the Alliance storyline (whereas Warcraft followed the Orc campaign), in this story the Orcs invade Lordearon where the humans have retreated to following the Orc Victory in the First Orc War.  This kicks off the Second Orc War as the Orcs in pursuit begin pummelling the Alliance into submission. The Orc invasion ultimately fails because the Warlock Gul’Dan for story driving reasons decides to rebel against Orgrim Doomhammer and splinters the tribe to attack the Tomb of Sargera. This blithering stupidity on the eve of the assault on Lordearon City allows the Alliance to rebuild and quickly counter attack, stopping the horde. The game ends with the Alliance destroying the Dark Portal and therefore preventing further Orcish incursions.

That is until Beyond the Dark Portal, the tough as nails expansion pack that I quit after the second mission as I couldn’t be fucked. The story deals with a 3rd Orc incursion, the Humans pushing back and deciding to invade Draenor the Orcish homeland. The story then goes onto the stuff about portals, blah blahblah, if you care go read Wikipedia. I personally don’t think the expansion adds much, as beyond some missions (and story around this) the only other new thing on offer in the introduction of hero characters. These are hard units, but that’s it. No real special abilities and no added elements such as RPG elements seen in the third game.

The story is very engaging, and to be honest, is the reason I carried on playing the game. It feels like there is a world around you and you’re not just Team A fighting Team B. This rich lore is further expanded and in some cases retconned by the World of Warcraft, but you can see story-lines forming and characters introduced that plas a significant role in the latter games. Fans of WoW will enjoy meeting some named characters that play key roles in that game. 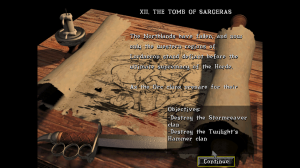 Each mission provides you with a well voiced story dump.

All in all, the things I dislike about the game such as the impossible resource management is what makes Warcraft II a deep tactical game, and the depth in secondary attacks allows for fantastically skilled players, the problem is, to a lay person these features are dull. Spending 7 hours learning one level isn’t fun. Playing online versus somebody who has been playing 25 years isn’t fun. The entry bar is simply a bit too high for me to fully enjoy the game.

Again though, some people will like this, and for those people you can add possibly 20 points to my score. But for me the only reason I kept playing was the story. The characters and the setting is rewarding and deep. But the gameplay is a little unfair at times meaning I wasn’t always having fun while playing as the core game loop is a little bit too elite. You need to click 87000 times a minute to be good at the game and you need to know the map like the back of your hand. I don’t feel like Warcraft II is a game you can casually dip in and out of.

Pros: Depth of lore and characters

Cons: Gameplay loop is a little bit boring, a bit too elite for casual play

Warcraft II scored very well, with 90-95% scores all over the board as well as winning a number of RTS games of the year awards.