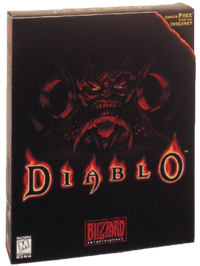 I never actually played Diablo back in the day, I sank well over a thousand hours into Diablo 2, and maybe a hundred hours into Diablo 3, but the original game not a jot. So going to view Tristram in it’s original state before some demon cows came and fucked it will be interesting. Heck, I even got to meet the fabled Wirt. The thieving bastard.

Diablo is a hack-n-slash-dungeon-crawling-RPG-roguelike-loot-athon. Yes, that was a mouthful. You take on the role of either a self-named Warrior, a Rogue, or a Wizard, meaning you either punch things really hard in the face so it dies, punch things a lot of times in the face until it dies, or shoot it was magic until it dies. To do this you kill smaller things, gain experience, and levelling up the four stats (Vitality (health), Strength (hit power), Dexterity (attack rate/blocking) and Magic (magic power and mana), each time you gain a level you get 5 points to spend between these four stat lines. I brought back my original characters name from when I played the sequel in the past, Raging Chicken.

Stay a while, and listen…

Wait, only 16 levels? Yeah Diablo is really short in terms of amount of content if you know what you’re doing. My game took 8 hours from start to finish as I wanted to fully explore. The first 8 levels of the dungeon took me roughly 6 hours as every 3 rooms I needed to teleport back to town sell what I had and buy more mana potions.

However,once you hit floor 9 the money starts to run away with you. And you become able to clear entire floors without needing to go back. And herein lies the biggest problem with Diablo, it is can be rather dull and pedestrian at times as the pacing feels a little off. I would have to turn off after each floor and take a break as teleporting back and forth is clunky and the game generally feels slow, this prevents prevents you from ever being able to pick up momentum to keep you engaged. 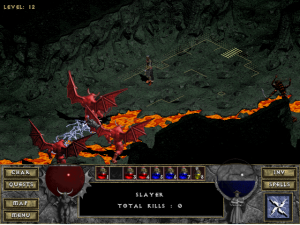 The next big problem is Diablo is seriously lacking an endgame. If you have played the other Diablos or the Hellfire Expansion to the Original Diablo you get a few extra floors, but more crucially harder difficulty modes. However in the vanilla game you beat Diablo, and the game is for all intents and purposes over. You *CAN* start a new game where you’ll be whatever level you got to, but why keep playing when you’re able to one shot the entire dungeon?

Further annoyances come in the lack of “continue” when you die it is gameover and you have to go back to the last save, if you haven’t got in to the habit of regular saves then expect to be set back. If you have played other versions of Diablo this is annoying as you are accustomed to death being punished in other ways (ie loss of cash/durability).

My main playthrough I chose to be a wizard (I normally do Warrior type playthroughs) and the magic is cool enough, but the final boss fight does annoyingly require you to have the Mana Shield spell to beat Diablo.  However, with the RNG nature of the game this spell book might not drop. Leaving with you needing to save/reloading outside a shop until the book spawns as a sale item.

Magic on the whole starts out as the “hard mode”, the lack of funds and the lack of mana to draw keeps causing the game to grind to a halt, having to teleport back and forth schlepping to the witch hidden in the top corner of Tristram to buy potions grates, and you have to rely early on with limited use staffs that contain spells.

With the other two character classes you can happily top up on health potions and be on your way. In a small amount of testing I was able to power through to the 6th floor in around an hour, whereas this was 3-4 hours with the Wizard. It felt like the game would slow down towards the end, unlike the Wizard where the last few floors I blasted through in an hour. This struggling with pacing was the underlying cause of my boredom.

I am a big fan of Isometric graphics, Diablo still looks good to the eyes, sure Diablo 3 will happily fill the screen with particle effects and uses true 3D, but Diablo is fine. It runs as fast as it should and I never experienced any slowdown.

Check this nob out…

Arrrgh the third big issue with the game. The lack of Multiplayer support. When buying Diablo through Good Old Games it is explicitly advertised as having online play using Battle.Net, and I can’t for the life of me get it to work. The internet is filled with guides and patches and links to various ways of getting Diablo to work in Multiplayer, but I can’t get it to work. Here you unlock harder modes and a reason to continue beyond your first play, but with my relatively advanced computer skills I couldn’t get the bastard to connect.

With Diablo being a Roguelike, the dungeons are procedurally generated so each time you start a new file the dungeon is randomised, meaning the layout, the enemies and the loot will vary drastically between plays. This in theory gives you infinite replayability. There is also the possibility that the quests you encounter will vary. But sadly… These are all a little meh. The missions don’t really vary, it is a question of entering specific floors and one of two or three missions will generate and they are all kill (a) or pick up (b) sure a dedicated fan now may want to replay the same file 10 times to collect all these for unique items, but what’s the point? The game doesn’t carry on at a harder difficulty so the only thing to make it a challenge would be to start a new character on every single playthrough but with only three character classes and limited customisability there isn’t a strong need to do this.

Starts to get interesting here

If you love Diablo 3 then Diablo might be worth a visit, you will be frustrated by a lack of features though if the Online play isn’t fixed. Despite my grumbles Diablo’s core gameplay still holds up well enough though it is fast paced and can be frenetic at times and the only real differences between this and Diablo three is graphics and screen filling particle effects.

The main drawback is that Diablo is pretty boring for the most part with the four areas not being distinct enough (hell aside). The lack of multiplayer which is a core aspect of franchise is lacking (without too much faff). The lack of reasons to replay the game in single player is a double kicker when you consider the lack of extras. And again, a lot of the game is quite boring due to the awkward pacing throughout the game.

Pros: Can be fast and frenetic, some replayability

Diablo was released to critical acclaim, and would score high 80s/low 90s scores. Diablo would also go on to win Game of the Year from several gaming companies.