I love the Resident Evil series. It is honestly one of my favourite series despite the fact I spent an inordinate amount of time complaining about the games. But no matter how many times I am burnt by some shonkey ass release, some lore ruining sequel, or even another bloody spin-off,  I keep coming back. There is soul to the series that games such as the ones churned out at EA lack. Nostalgia does help with this and I am one of those that that prefer the original tank control games. But that isn’t to say everything afterwards is worse by default. A fanboi-ish charm does keeps me coming to all the games but 4 is great. I try to give 5 more chances than I feel it deserves, and 6 even gets “one more try” occasionally before turning it off in bitter disappointment.

For this list I will be looking at the times Resident Evil as a series jumped the shark, I will be ignoring the proper spin-offs such as Survivor, the Outbreak games or those weird games like Umbrella Corps. Just the mainline, games including Revelations. If you don’t know what jumping the shark means it is:

When a series reaches a point when far-fetched events are included merely for the sake of novelty, indicative of a decline in quality.

There will be spoilers I guess:

There had to be a moment from 6 on this list, because, well it was a hot freaking mess. But you know why games in the series like Resident Evil 2 were kind of clever? Well older games were clever because as you beat a boss such as G-Birkin he doesn’t evolve into a bigger harder complex life form. No, he devolves into a blob monster. The more you fuck his shit up he devolves. You see the strongest lifeforms are the simplest. You could argue that this design was due to limitations of the graphical hardware present on the PSone but the underlying science is actually more correct to blob out. Hell, I’ve seen Evolution so don’t make me through some Head and Shoulders at you to prove I am right. It was stupid and is video game shorthand for generic boss fight. Hell, even The Resident Evil 2 Remake stuck to it’s guns and has G-Birkin blobbing out.

It was, simply put. Shit. 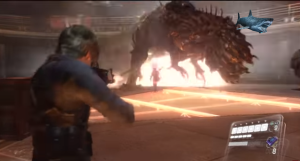 7 is a good game it isn’t on this list to say otherwise but it does struggle early on where it tries to be an Outlast clone. It does find it’s feet and becomes a great Survival Horror game in it’s own rights. Sadly the last quarter of the game blows all the supernatural horror that the had been build up over 10 hours when we board the boat. Slowly developing psychological horror themes with supernatural tones is all thrown out the window as the game is forced to “Resident Evil” it decends into generic action with typical conspiracy fodder. But I can ignore the conspiracy fodder, it’s Resident Evil, let it Capcom… No, what annoyed me mnost is having the child be some sort of Biological Weapon. It wasn’t a clever twist, it was tired, and predictable that butt-hurt me more than the totally arbitrary linking to Umbrella, and that bit with Chris Redfield… Good game with some shakey foundations and a shinkey ending. 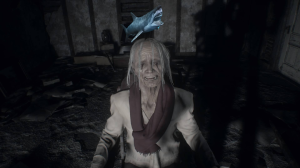 Ok, *THIS* was a fantastic twist.

Wesker was just “okay” in Resident Evil, he was generically bad and very much dies in a massive explosion. Having him turn up with superpowers in Code: Veronica wasn’t a stroke of genius, it was lazy writing and pandered to fans. The phrase “He’s dead Jim” should have been employed in the development meetings on more than one occasion and whoever insisted it’d be a cool twist was a blithering idiot.

To summise, Wesker is shit and you are wrong for liking him. 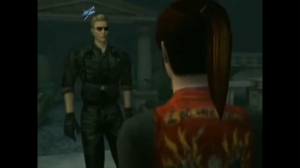 Seriously guys, it was unnecessary.

This is mostly on the list to pad the numbers to be honest. I actually don’t think this moment qualifies as a jump the shark moment, I think it is the moment the series lost all credibility and it is this moment that led to rebooting the series with 7. Thankfully it came right at the end of the game during an otherwise unremarkable final final boss fight. Featuring a pretty comprehensively dead Wesker now in hulk mode. 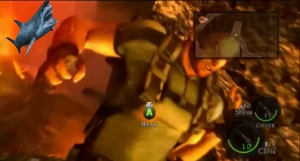 eye rolled so hard I tore my cornea

These moments did not qualify:

All of the above were predictable or daft, but none of these are bad. I make no secret about not being an Ada fan. I was the one person hoping the RE2 Remake would have the twist that Ada was just a journalist looking for her boyfriend.

It does makes a little bit of sense plotwise, I guess. You nuke the city to stop the spread of a zombie apocalypse. The problem is, this is where Resident Evil jumped down the conspiracy rabbit hole that it never recovered from. Umbrella don’t carry on as a company. The events of Code: Veronica do not need to happen as there is no way Umbrella hold any political sway at that stage. Claire doesn’t need to infiltrate a HQ. Resident Evil 4 doesn’t happen because what jackass thinks “let’s turn this castle into a god damn lab, nothing could possibly go wrong“. Ada is obviously dead in 2, so she doesn’t turn up ninjaring around. As mad as Midget Napoleon is he ain’t got the political clout to convince a liquidated company to give them heir mad lotions and potions. 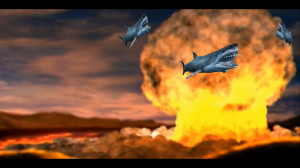 You see the escalation from Nuking a city to what we got in Resident Evil 6 is the literary equivalent of moving from Herman Melville to  “writing boobies with loose pubic hair in the shower”. From this point on, the need to up the ante each game results in silly ideas as you can’t logically top a nuclear blast.

So, yeah, it is Nuking Raccoon City where things go wrong. You can’t top it with anything Capcom are capable of dreaming of so you have to don your tinfoil hat, and end up with a hot mess like Resident Evil 6. If nuking the city spelt the end of the series it would have been fine, the issues comes from the series carrying on. Crapcom simply can’t write stories.

4 comments on “The times Resident Evil totally jumped the shark.”