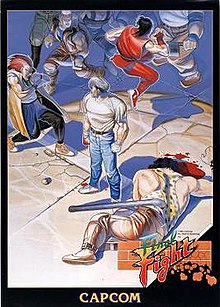 It’s a while since I did the SNES version of Final Fight and at the time I got a bit of stick for not scoring it as well as others had liked. I was always happy with the score to be honest and 70% isn’t a bad score either. The review did focus on some of the SNES specific faults, so I thought it would be fair to go and play the original arcade version of Final Fight to see how it stacks up.

Right off the bat, Final Fight is a damn cheese-fest. Not a brie lovers convention, not a gouda appreciation society, but a fucking cheap hit cheese-athon.  There are tonnes of points in the game where you can expect to get hit by enemies off screen. Every single Fat Guy has a chance of doing it, later levels have flying barrels where you get a frame reaction time, with even more frustration coming from barrels coming from both sides. Enemies will chain together attacks or spam certain attacks that you have no recovery from ad it isn’t abnormal for you to be knocked down then RNGesus spammed with Andres jumping on you endlessly. And this is before I get to the fucking bosses. 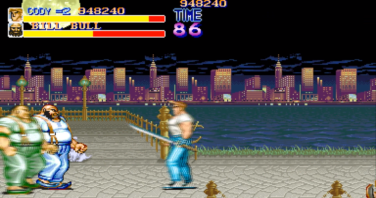 This bit is a freaking chore

There are only 6 levels, and thankfully none of the bosses are repeated. One is a palette swap of the Andre blokes, but the other 5 are relatively unique. But… They all utter cunts. The first level guy is fine. But second level is a douche with a sword who absolutely poons your face off. Level 3 is a cop with a gun that spams bullets, 4 is a grenade spamming douche fag. 5 is the palette swap arse, and then the final level is a arsehole in a wheelchair with a machine gun.

They are all annoying in different ways, but the worst aspect is that they piss through a third of your health bar with one hit with no cool down. It can be frustrating to see yourself doing well to suddenly lose a life because a random enemy appears off screen with triggers a death combo from the boss. 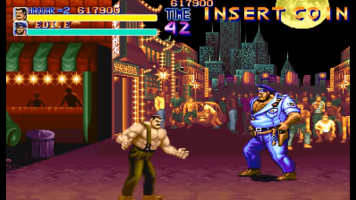 Eddy or Edie, dunno. He is my least favourite boss

All of this brings me to the difficulty. And Final Fight, as you might have been able to tell, is hard. Frankly too hard. The difficulty comes from cheap hits, there isn’t a diverse move set to plan your attacks. To beat the game without ploughing coins into an arcade machine you need to learn frame perfect timing which is as fun as it sounds. You are limited to punching, jumping, and a special attack that drains a little bit of your health. This is useful as you’d rather lose 5% than 15% from tanking a hit. But the three attacks mean there is no variety. Nothing to mix things up. Hammer Punch, jump kick. for 45 minutes. 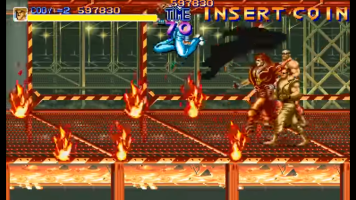 In case you didn’t know, Final Fight is a Beat ‘Em Up, so walk left to right and punch things dead.

There are three playable characters; Mike Hagger, ex-pro wrestler (Saturday Night Slam Masters) and Mayor of Metro City is the lumbering hard man. He hits hard, and can take a pounding. Cody Travers is the every man in that he is the balanced one. And Guy… He’s a fast Ninja dude who is mates with Cody. He is super fast but weak as shit and has a jaw made of glass. 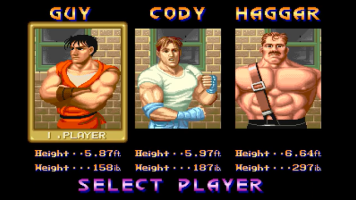 The Mad Gear Gang have kidnapped Jessica, Hagger’s daughter and Cody’s better half. For reasons Guy tags a long to help you then make your way across Metro City punching gang members to death until you come across the Leader (Belger). It isn’t exactly a masterpiece of story telling.

Differences between this and the console

Final Fight in the arcade gains:

The main differences that you will notice come from the lack of censorship. Poison and Ivy are present in their sexy state, and not covered up or turned into dudes like the SNES version. And my favourite dude, you know the the poor sap who has his car whomped for grabbing a buritto in a Gas Station saying the unimaginable. I mean seriously, what did he do to deserve having his car trashed by the good guys. 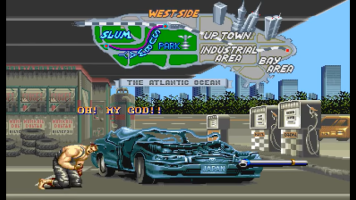 I’ve been pretty harsh on Final Fight so far, but it isn’t terrible. It just isn’t that good. Arcade versions are supposed to be slicker, with more going on and to an extent that is true. There are more levels and more enemies on screen. But these don’t improve the game. The extra level is a chore as it has a cheesy boss fight as well as too many cheap hits at the hands of the environmental hazards. But the amount of enemies is my biggest problem, as having 10 enemies on screen is as much as a clusterfuck as you’d imagine which results in you resorting to dull jump kicks to survive. This endless jump kicking means the combat is reduced to bland nothingness and limits the already hamstrung gameplay.

After that, the pacing still feels all over the place with overly long levels that get progressively longer, and once you have played through the first level you have seen all the enemies. They just get more and more health as you progress, leading to typical beat ’em up monotony. Ultimately the Streets of Rage games are better, so too Turtles in Time and Knights of the Round. Play them instead.

There is no denying Final Fight’s legacy with characters spinning off into other Capcom games such as Saturday Night Slam Masters and the Street Fighter series as Final Fight scored well. High 80s to low 90 scores were common this led to ports to the big hitters and a slightly pointless Mega CD version.