Jeez, this takes me back. Not just to my miserable childhood (I actually had a very good childhood) but back to where this site all began. See for those that have somehow stuck with us through the years ,or joined us later, you might remember we did Paperboy in that early flurry of a new venture when we were all keen to play and review things before father time took a cricket bat to the our knees.

But yeah, we did Paperboy and I thought it was finally play the sequel.

You take on the role of a fucking douche-sociopath-paperboy or girl and you deliver papers to the residents of Easy Street or the weirdoes that live on Hard Street. As the sociopathic paper boy (or girl) you go about delivering the papers to the houses on your route. If a house isn’t on your route you’re encouraged to bean papers at windows, smash priceless statues and generally just be a little shit that needs locking up.

The houses you are supposed to deliver to? Well they’re just cunts. Savage dogs, pricks trying to run you over, neglectful parents throwing babies in prams at you, all to stop you delivering their morning paper to their tiny ass mailbox. You can aim for their door step too, but you’ll probably break a window and piss them off if you do which makes sense, I guess. But I start to understand why the paperguys are so sociopathic to be honest, they have to contend with some fucked up shit on their route, and your customers are way too picky about where the paper lands. If it is a milimeter off the door step they’ll unsubscribe. Fine breaking a window I get, but maybe they shouldn’t have set up a death maze in their front yard to stop you being able to place the fucking paper somewhere sensible.

Beyond that, the week gets progressively harder as more and more douche bags build what seems like a minefield on the road to stop you evil dogs, careless mothers and cars will combine in their attempts to thwart you delivering the news. Though the fail state becomes harder to achieve as as long as you make one delivery you can progress to the next day.

Some in game events lead to special news prints. Which I guess forms a “story”

The music and Sound FX are a mixed bag, the bassline is thumping, with jazzy/funk aplomb but layered over this is a fucking din. High pitched, out of tune synth sax, with the most frustrating fanfare noise for when you land a shot, it is ear-piercingly loud and again, slightly out of key. It leads to a cacophonous clusterfuck that leads me to mute the TV after roughly 30 seconds. And keep in mind I’m shit, and don’t land many shots… Imagine being good and having to put up with it!!!

There are very little to be honest, other than a minimal graphical upgrade and a few different obstacles which don’t affect gameplay, the only thing I nticed was that passing obstacles on the left no longer seemed bugged. That might have just been my own incompetence in Paperboy, but in Paperboy 2 the issue never seemed to arise. 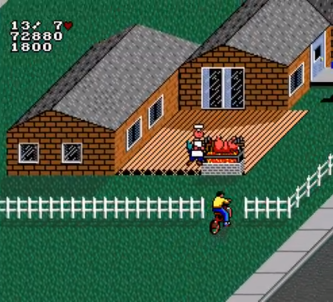 Maybe you’re delivering a left-wing paper in a right-wing area and the residents resent you for it? Maybe you’re a Fox Guy delivering to a CNN street, it could explain the rampant bullying you receive. That said, Paperboy 2 still isn’t great, it is a slight improvement on the original as some issues such as the hitbox problesm seem sixed and there is more variety in play ~ more streets and a gurl ~ but this is a barebones 8bit game in the 16bit generation that simply didn’t stack up at the time.

Play it for 10 minutes and you’ll enjoy a small dose of Paperboy 2, you won’t get far, but you’ll get enough of a taste of the game. The alternative is to plow 100 hours in a mediocre title that doesn’t really do enough to justify the time commitment in “gitting guder”. So expect repetitive gameplay that isn’t even remotely interesting after 10 minutes.

Pros: Beaning people in the face

Back in’t day Paperboy 2 was only scoring 5/6 out of 10 scores so it on most playforms, however the SNES version was given a massive 1.5 (out of 5 starts) and 29% due to shonkey controls and poor camera angle.