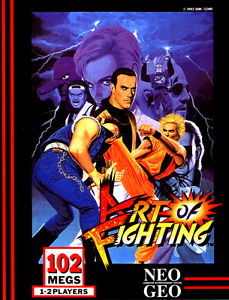 I try to not suck at Fighting Games (I always suck) I really do. But despite my suckatude I do try to look beyond my incompetence and score things fairly. So here we go, Art of Fighting.

Well, it is a tournament fighter, so one-on-one fighting where your aim is to punch and kick your opponent unconscious in a best two out of three ladder format. Being a Neo Geo game you’re limited to 3 buttons, A, B and C and you try your best to combine these with the directional buttons to ping out a zinger.

One of the keys to a great fighting game is a great roster chock full of personality. You know, Tekken, Street Fighter II, Dead or Alive, Soul Calibre, they all have a character you probably love even if you only play them casually. Here you get 10 characters, and they will the usual tropes, Ninja, different Ninja, slow and hard guy, , sorry no ladies here. But they do all play differently meaning if you like slow lumbering bastards that hit like a freight train Jack is your man. Generic ninja in white gi you have Ryo, yeah, they didn’t try to hide that rip off.

The problem is, all but the lamest 2 characters are locked in Story Mode. Robert is an uninspiring loser that  is good at jumping and kicking. The other is Ryu, sorry Ryo. You need to learn the game with two sucky characters.  Imagine if Street Fighter II had a story mode with only E-Honda and Dalseem unlocked to start with? That’s what Art of Fighting’s story mode is, and no, Ryo and Robert aren’t as interesting as E-Honda or Dalseem. The rest are playable in 2 player mode, but oddly, I do want to play games on my own occasionally.

If you started with the full roster you’d be able to flail around and stumble on a character you like and enjoy the game. As it is, you’re stuck unlocking the frigging game from the offset.

Robert is a “smaller” character…

From a story perspective it makes sense why you’re bound to Ryo and Robert from the start.

Ryo’s sister has been kidnapped by Mr. Big (I guess he’s The One That Wants To Be With You…) to lure Ryo’s ninja master dad out of retirement. Robert and Ryo set off whomping. It is effectively the story to every Beat ‘Em Up ever crossed with any Buddy Cop action film from the 1980s. It isn’t especially poor, but the story does then require you to unlock the rest of the roster. 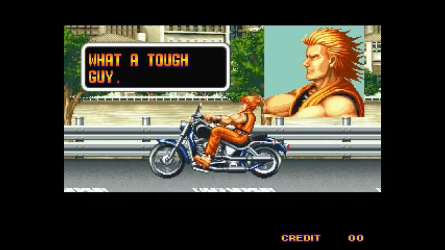 This is a hard one, as the graphics are… “eurgh?” complete with question mark. It isn’t ugly, but the sprites and backgrounds are too chunky, and the size isn’t used to give tremendous amounts of details, but simply to make the sprites bigger. So the character just sort of fill the screen, especially larger characters like Jack.

Over all it does look ok though, if not for some weird sizing. The issue is compounded by the camera as it zooms in and out depending on how close the two pugilists are, but as this is a fighting game you’ll usually be upclose and personal meaning a super tight camera most of the time.

I do love that as the fight goes on and you get punch in the face you’ll progressively get more beaten up graphically. Land a good punch and your opponent will get a black eye, punch him some more and you’ll break their nose. It is visceral and will offend the Mary Whitehouse’s out there, but all fighting games should come with this feature.

Robert does a Chun-Li mega kick…

The games bullshit… Well, maybe not. But as I admitted earlier I suck at fighting games. Usually though I can get to the latter stages before a Goro type or Eyedol fucking whomps me. Street Fighter I’ll lose bouts, I’ll lose fights, but I’ll get to Vega, or Balrog and eventually beat them with cunning and luck. Here I fucking die. Endlessly. Like it took me 3 attempts to beat the first stage… Not as bad as Eternal Champions but hard. Then second stage, I had Jack. 15 attempts it took me. 3rd stage took me 20 or so. I just couldn’t beat the freaking game, opponents would spam cheese moves, Jack despite being a lumbering hard guy could leap across the screen moves that’d take 30% health with one hit.

Art of Fighting tries to introduce a feature which boils down to managing your spirit meter, mastering this is key to winning. Using a special move will reduce your spirit which will then slowly recharge. A super punch might use 25% of your spirit, but the super punch of Megadeth will use 75% of it. It means you can’t stand in a corner spamming fireballs (because you can’t through fireballs for one), but the moves are a bit too fiddly for my clumsy hands to pull off reliably.

Bonus stages, and gameover screens teach you some of the moves.

Right ok, Art of Fighting doesn’t suck. It isn’t terrible. It just makes bad decisions. Having the poor roster locked away from the offset doesn’t encourage you to play. It doesn’t endear to the story. It frustrates you. If you don’t like a character or his fighting style is the opposite to what you want tough shit.

Art of Fighters pretty much fails both my tests for a good Tournament Fighter, 1) Moves are too hard to figure out without a guide meaning I can’t really immerse myself in the game, and 2) Playing against a mate is boring as neither of you can do anything other than spam jump kick.

Is it bad? No. Its just mediocre.