The Hitchhiker’s Guide to the Galaxy. Infocom (1984) Web Browser 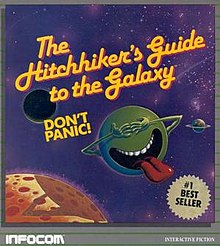 For a long time I considered the BBC TV series of The Hitchhiker’s Guide to the Galaxy and Douglas Adams’ book* to be the funniest thing ever written. Sure the show is dated and has that classic BBC look of terrible Sci-Fi that is still bizarrely popular with trash like Doctor Who. But while the show is dated, and a little drawn out in places, is still a pretty humourous**. So what could be better than a Text Adventure retelling of the series?

*Ignore that awful AWFUL film released in 2005.
** The book is still a barrel of monkeys

Now to be clear, I am playing the 30th Anniversary Edition as you get the bonus of actual pictures to play along to.

Oh wow, I honestly forgot about this genre of game. They are before my time and probably the only other text adventure I played would have been Granny’s Garden. But Jesus fuck are these games convoluted.

Firstly, the game assumes you know the book or the TV show. So if you haven’t seen it, either fire up a webguide (which all suck) or put the TV show on in the background pausing every 30 seconds to get the hint.

So, i’ll take you through the first level.

It is pitch black

Turn on Light. This is easy enough to figure out. But might take a few attempts.

Bedroom, in the bed.
The bedroom is a mess.
It is a small bedroom with a faded carpet and old wallpaper. There is a washbasin, a chair with a tatty dressing gown slung over it, and a window with the curtains drawn. Near the exit leading south is a phone. There is a flathead screwdriver here. (outside the bed) There is a toothbrush here (outside the bed). 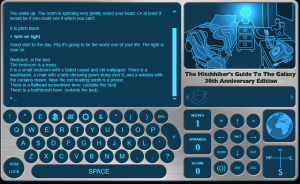 This is the game….

Ok, so what do you do? Well I want to open the curtains, but you can’t do that stark bollock naked can you? So you need to put on the gown… But you can’t because you’re not holding it. You need to pick it up. You can’t pick it up as you need to stand up first. So the inputs need to be as follows:

Stand up
Pick up gown
Put on gown

‘It isn’t rocket science, but it is tedious. But now you’re wearing the dressing gown you can open your curtain.

As you part your curtains you see that it’s a bright morning, the sun is shining the birds are singing, the meadows are blooming, and a large yellow bulldozer is advancing on your home.

You can’t use the phone in your room, you can’t open the window to shout out to the bulldozer and you can’t exit the room. Turns out you have a hangover and need to take some analgesics you have in the dressing gown pocket.

Glorious, your hangover is cured. Now to deal with the yellow bulldozer. But the phone isn’t a viable option, so the only thing left is to leave the room.

You’re now on your front porch, and their is some mail. Now for “reasons” you need this later, but I am not bothering here because I am not going that far in this mini-mini-walkthrough.

Front of House
You can enter your home to the north. A path leads around it to the northeast and northwest, and a country lane is visible to the south. All that lies between your home and the huge yellow bulldozer bearing down on it is a few yards of mud.

Mr Prosser, from the local council, is standing on the other side of the bulldozer. He seems to be wearing a digital watch. He looks startled to see you emerge, and yells at you to get out of the way.
The bulldozer rumbles slowly towards your home. 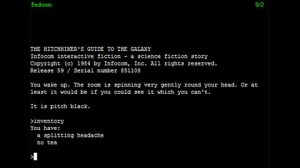 This WAS the game released in 1984, Christ we were primitive back then.

Alright, what do you do hotshot? Shout at Mr Prosser, open you gown and flash bulldozer? Ask for a cup of tea, hit Mr Prosser (actually an option). No, you lie in mud.

OK, if you know the book this answer is obvious. But I hadn’t seen the series in over 15 years when I started playing, and I can’t remember the film. Now you’re lying in the mud all you can do is wait. 3-4 times.

Moments later, your friend Ford Prefect arrives. He hardly seems to notice your predicament, but keeps glancing nervously at the sky. He says “Hello, Arthur” takes  towel from his battered leather satchel, and offers it to you.

Did you take the towel? The game was pretty much telling you to. Tough shit, you just hit your first fail state. The correct answer is “But what about my house“.

Sure your house is a concern, but the game just threw a red herring made of fucking dynamite at you. If you take the towel off him Ford walks off and you will die if you ever try to move. This is the frustrating trial and error bullshit you have to go through to complete the game. This isn’t something that knowing the book would especially help with as the game is simply being a cunt to you.

This is just one tedious example, and while you could type those commands in in 30 seconds, it does take 10-15 minutes to read and digest.

Oh yeah…. didn’t mention that earlier. You only have 20 moves to get out your house before the bulldozer crashes into the house killing you. Good luck on your first attempt if you haven’t read my super handy mini-mini-walkthrough. 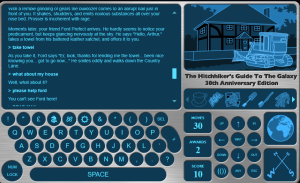 The action heats up, and you hit your first fail state!

Well it is The Hitchhikers Guide to the Galaxy, so go read the Wikipedia entry, read the book, or watch the BBC series.

I don’t have much else to say, it is simply a crap game. Text Adventures were fucking boring in the 1980s and in the glorious future-present they have aged as well as Mickey Rourke.

Knowing the TV show isn’t even a help as they have obviously added stuff to make it a game, but then at the same time the answer IS something in the tv show or book such as lying in front of the bulldozer so it is just levels of bullshit. An aside from all of this, playing a text adventure is akin to playing PowerPoint in a really dull Gender Politics lecture.

Cons: The humour is buried under tedious gameplay

Selling 59,000 copies in 1984 made it the second best Infocom selling game that yeat, it was the “forth best selling game of February 1984” it was praised for its sense of humour but slated for the obnoxious difficulty.

In 1996 Computer Gaming World listed the game as 42nd in their top 150 best games of all-time… Making me question WHAT THE FUCK CAME BELOW IT!!!!

*** I compromised my values and score systems to give a relevant score.

6 comments on “The Hitchhiker’s Guide to the Galaxy. Infocom (1984) Web Browser”