Posted on October 1, 2018 by Van Rockingham — Leave a comment

It is that time where once every 2 years the Americans and Europeans care about golf (apart from those blokes named Trevor (HI TREVOR!))…

So what better why to captilise on a sport I know fuck all about except what I saw in Happy Gilmore and try and boost our flagging readership with an uninformed review about a sport I don’t like, and honestly don’t get.

Well its golf innit! White dudes dressed like twonks ruin a good walk by hitting a little ball down a field with the aim of getting said ball in a hole that is designated a difficulty. However the rules make sense as the winner of the Golf is the person who plays the least golf. 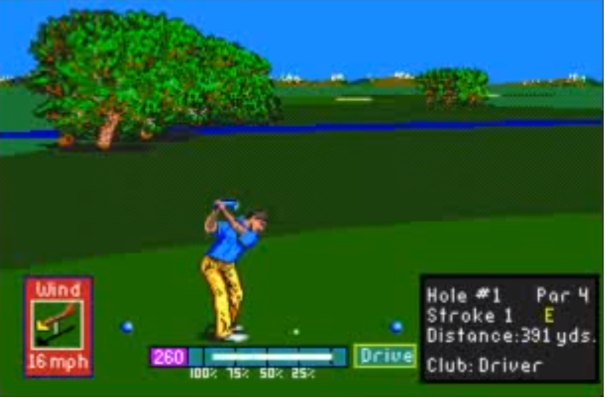 This being 1991 and the first attempt at a golf simulation you can probably tell it’ll be clunky and barebones. And let’s be fair, it is. But, BUT if you compare PGA Tour Golf to it’s Sportsing peers like FIFA and NHL it is actually fairly solid as a sports simulation. Choose a club, look at wind direction, roughly aim where you think the ball will go and you’re off. You don’t need speed or finesse for a gold games works so all the technical limitations aren’t *that*much of an issue. No clunky controls (ok they’re a little clunky) to overcome to add the grace of skating, or shitty frame rates to give you a migrane while playing. Well, sort of… as PGA does try to be helpful in offering a flythrough of the hole you’re on but as this is a Genesis game released in 1991 you can probably tell this animation is made of three and a half frames of animation tht for me hinder more than they help. Check it out it is a glory to behold!

Basically all you actually do (aside from calculate wind/and green flow) is press swing and stop the power bar roughly where you want it, and then try to stop the returning bar bang on the hit line. Miss the line and you’ll shank the ball either left or right depending on if you stopped swing early or late, and that’s it. There are a few shot selections like punching, chipping. But you’ll mostly be PHWACKING the ball as hard as you can with whatever golf club you were told to use by your caddy. Or you’ll Tin Cup it and try and play entire thing with a 7 Iron.

Why do I watch so many Golf Films? 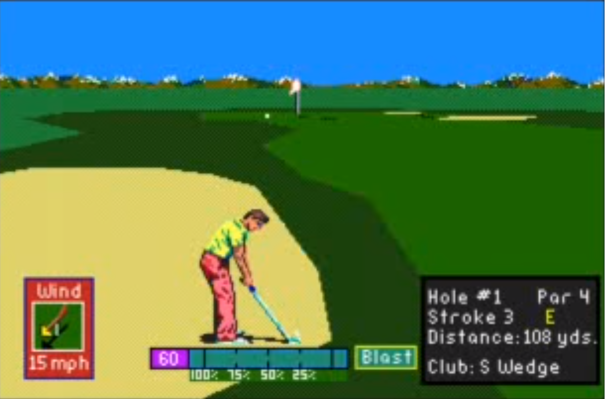 The action really ramps up in a bunker

Well it’s golf you have one mode. White guy walking in a field. Thankfully, you get 3 fields to choose from and I am reliably informed that those three fields are in fact real golf courses. Which I guess those funnily dressed white people will enjoy. 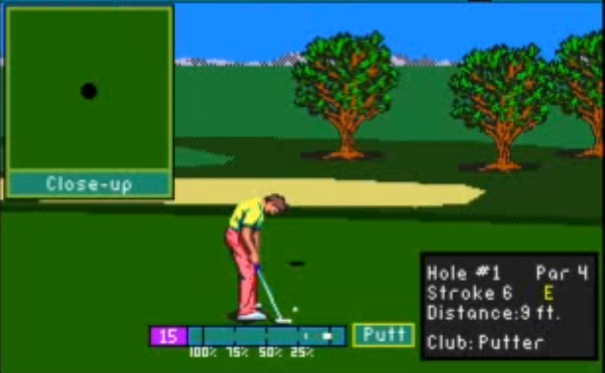 I don’t like golf… But as it is, PGA Tour Golf is a pretty solid game. Yes it is difficult, but real golf isn’t easy (I once took 35 shots on a Par 3 in real life) The mechanics are relatively competently held together and the courses look as much like they can for a videogame released in 1991. This is all a rude way of saying that PGA Tour is simple, but the simplicity is a thing of almost beauty. It works, and it works as well as it worked in 1991. Obviously the 25 other PGA/Tiger Woods games released after this are better and improve things but this simplicity means you can pick the game up and play it now.

I probably wouldn’t recommend you play it though as A) it is golf, and B) it is a sports game so play whatever the recent PGA Golf game is as it’ll be the game thing, just refined and presumably better graphics.

My score is coincidentally a FANTASTIC golf score.

PGA Golf scored 93% NINETY-FUCKING-THREE PERCENT! Coincidentally, a 93 would be a terrible gold score.