Posted on September 17, 2018 by Van Rockingham — Leave a comment

Every now and then somebody on the internet makes the mistake of airing an opinion which usually leads to a spot of flaming from man babies or Reddit Trolls, and one such occurrence was somebody uttering that Alien vs Predator is a good game, and since I have nothing better to do with my time I thought, fuck it, why not…

Aliens are attacking earth, you are a Colonial Marine and for some reason 2 predators appear to offer an alliance in stopping the Alien threat. Off you go punching, stabbing, and shooting Aliens to death in hot sexy Beat ‘Em Up action.

It is pretty basic as a premise, but what motivation do you really need? Aliens are attacking California, go kill them.

AvP does fall into the same trap that almost all Alien games do, and that is introduce the inevitable blokes with guns becoming the de-facto enemy for a while. However, AvP brings it round full circle and brings back the aliens for the climatic showdown. It is simple really when you think about it as what would you rather fight for a final boss, Generic Evil Dude A or Alien Queen? – If you answered Generic Evil Dude A I hate you.

if you want to live…

Being a beat ’em up you get choice, and rather than the standard 3 choices you’re provided with a whopping 4:

Alright, so it is a Beat ‘Em Up, so you can figure out 99% of the game. Walk left to right, and punch things till they are dead. Making things different is a ranged special attack that does something slightly differently. Dutch has a Smartgun implanted in his arm, Linn gets a rapid fire RoboCop pistol, and the two Predators get a shoulder mounted energy weapon. They all vary slightly, but it is unlimited use if you time shots well, otherwise you run out of ammo and are temporarily unable to use the gun. It adds a nice dimension to gameplay as a good play will string a tonne of moves together, while I can stand in a corner and spam fire and then hope I don’t take a pummelling while the gun recharges.

Further to all this, there is a breakup in gameplay too. A few missions switch the style of play to a run and gun shooter. Here you get unlimited ammo and you get to blast things. I have been critical of this type of mechanic appearing in modern games (Resident Evil 5 is modern right?) but that comes from shoehorning in features in a checkboxing exercise. These sections change the pace and keep a game from becoming boring. As much as I enjoy beat ’em ups, they can become stale 30 minutes into a typical 45-50 minute playthrough if the game lacks variety.

Other than that, expect to find floor turkeys for health, or limited use weaponry like Flame Throwers.

You know me, I am terrible. I could however beat the game by playing in the arcade and being able to pump credits in. For me, the only thing that lets AvP down is the frame perfect timing required to git gud. I like hordes of enemies, I like mass battles. But AvP does the thing where you basically have to identify 5 enemies on screen know their script, and know their animation frames perfectly to not take a beating. I don’t want a simple mindless beat ’em up, I just want a fair challenge. 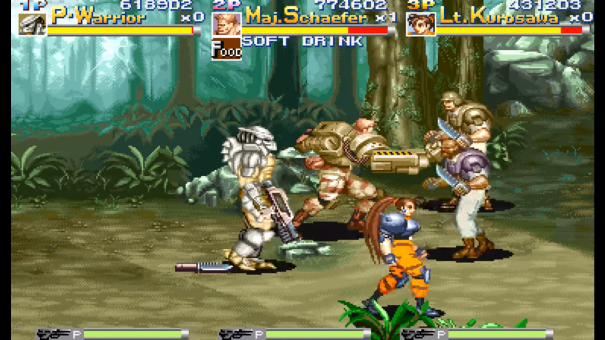 I wish I had 2 friends

You know what, AvP is as great as Beat ‘Em Ups go. Punching Aliens is satisfying, and while the Humans start to outstay their welcome it is a rare occasion where the mid-game badguy is discarded for the early game fodder. It doesn’t sound like much of a twist, but switching back to the Aliens for the last couple of missions means the pacing changes, the interest returns and the monotony that can creep into beat ’em ups never manages to quite set in.

Cons: Not having 2 friends. When the humans show up

AvP is fondly remembered, it frequently places towards the top of best Beat ’em Up game lists and reviewers such as GamePro gave it full marks for all categories.