Not to be outdone by Matt and his World Cup Special, I thought why not combine my love of all things Capcom 1980-2005 with the World Cup, and visit the one time Mega Man’s briefly forayed into the SPORTS.

OK, so you might understand this based on the title, but this is Mega Man… Soccer. Mega Man playing soccer. With the evil robot masters. It is nice that the evil robots have managed to cease hostilities to organise a kick about, but if the Allies and Germany could do it in the First World War, then obviously robots in the future can bond over the sports.

Anyhow… This is a “football” game, two halves of 5 minutes, and 8-players aside. 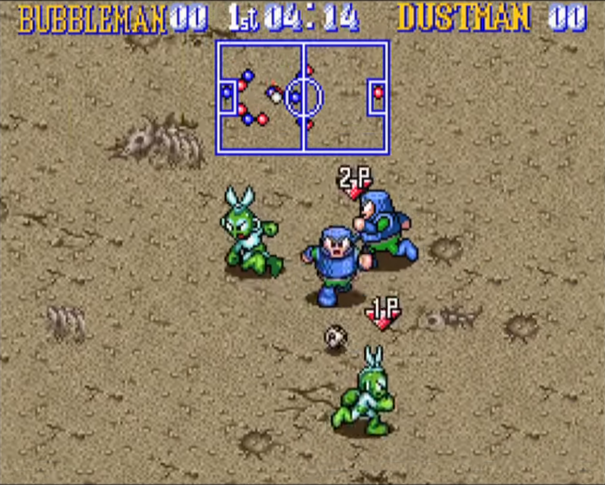 The main draw for the game is the Capcom Championship, this is as close to the Mega Man games as you will get. You start off as a team of Mega Men (all 8 of them) and you then choose to play the Robot Masters in whatever order you like. Beat a Robot Master and you gain that Robot Master. So if you beat Elecman you will get an Elecman on your team. This obviously progresses until all the Robot Masters are defeated and you move onto the main bosses where you get to face a team of Proto Men,  before a final cheesed showdown versus Dr Wily.

Each character has a set amount of stats, Mega Man is the all rounder because he is Mega Man. Elec Man is faster, Cut Man is better at tackling, Dr Wily is a cheat with max stats… It means each character has a position and if you play the other game modes you can pick who you want without the faff of a story.

As for picking your team but there is nothing special to it, the stats are obvious even to the most special amongst us, so you should always put the one with highest tackle in defence, and best shooter as a striker.

It is difficult to know where to start with the negatives, but i’ll start with my biggest. Your colour on the minimap changes! So picture this, you’re Team Mega Man (Blue) playing Team Cut Man (Red), first half you will be Blue on mininmap, makes sense dunnit? Second half? You’re red. WUT? No really, the colours are tied to the side of the pitch you’re shooting. This literally makes zero sense. I get that in 1994 some lazy ass developer turned up to work one day and simply couldn’t be fucked programming in a minimap colour for each time. Fair play to him, we all have lazy days. But at some point that fucknozzle decided to programme the game so the minimap changed at half time. 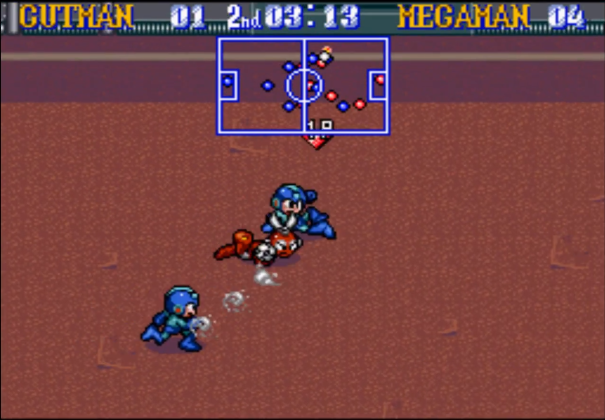 I’m not even kidding, Team Mega Man are red on this minimap.

Where to next???? Oh I know, the fact that the enemy will homing missile tackle you. You cannot make a break in this game as the AI will endlessly spam tackle with zero cool down. This means even with a 30 meter head start they’ll catch you in 3-4 seconds as they spam tackle at you. You however, miss one taxckle and the opponent is so far off screen you’ll probably concede a goal.

The formations are frankly broken too. Each game, and at half time you’ll be told the opponents formation 3-2-2, 2-3-2, 2-2-3, or Sweeper. If you don’t pick the counter to their tactic you’ve lost. Pick the same as them, you’ll draw as the midfield gets bogged down in players. 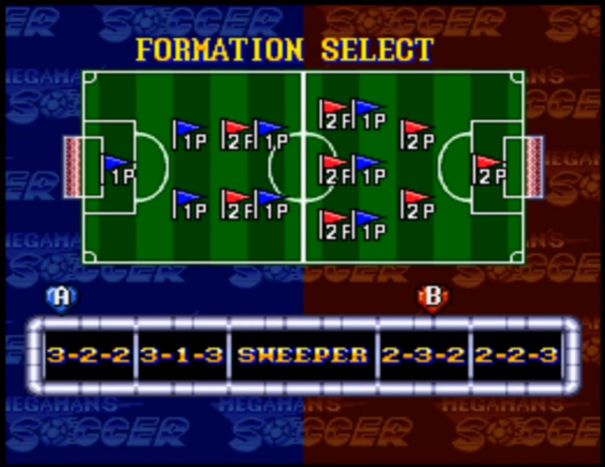 But I guess the actual worse thing is is that Mega Man Soccer almost plays like an RPG. It is so slow and clunky it feels like you’re waiting to be allowed to do something (again AI doesn’t seem to have this issue) and it reminds me of Blitzball in Final Fantasy X. So as I don’t expect you to have read and memorised all the articles on this site I ‘ll recap… I hated Blitzball, it was boring. Have I alienated you again? I really, did. Blitzball was a nice distraction, but if you wanted the Ultimate Weapons you needed to grind 30 hours of Blitzball and since I was winning 10-0 every game it was tedious beyond belief. But that was an optional minigame. Mega Man Soccer is a game you would be charged actual money for.

Finally, Capcom developed or published games are known for their smooth controls, the Mega Man series is built on it. But here it is just clunky, sluggish to respond and all round bad.

The characters are actually pretty balanced.

You actually get a special football suit! Coincidentally it looks like the regular Mega Man suit.

I honestly don’t know what to say… I love Mega Man, I do not love Mega Man Soccer. It isn’t just bad, and what’s worse is that it is so completely pointless in so many aspects. I have complained about Mario Sports games in the past, but they all focused on condensed versions of the sports, with a Mario gimmick thrown in, with a wide cast of characters BUT ULTIMETLY They were simple fun, if a little limited.

Mega Man’s Soccer makes no sense in that you’ll have 8 Dr Wilys running around the screen, there isn’t a focus on the sport the game is supposed to represent, and ultimately it feels unnecessary. Why is Mega Man playing football versus Robot Masters, why does it include Robots from Mega Man 1-4 and one from Dr Wily’s Revenge. Why is the soccer element so poorly designed, why is it so slow, why is the music bad? These are all questions that should have been answered in a boardroom with a design team and manager getting fired.

It is easily worse than Soccer Brawl. It is simply shit.

Pros: Realising you’re an adult and are allowed to stop playing piece of shit games, killing robots with the power attack

Mega Man’s Soccer reviewed mixed reviews with a number of people complaining about the controls. It scored 50-70% scores.