Castlevania: Symphony of the Night is a game everyone and their dog have told me I would love, but for dozens of reasons I never played it and it reached a stage where I was actively avoiding SotN  because there was no possible way the game would live up to the hype.

SotN is an Action-RPG–MetroidVania set on a 2D plane. You run around in a non-linear castle and punch things to death with your sword. As you level up and progress you find new equipment and gain new abilities, this in turn allows you to punch bigger things in the face, or allows you to access previously inaccessible areas of the castle.

The castle then starts to link up in strange way that while you’re exploring don’t initially make sense, but when you find yourself at the beginning of the castle it suddenly clicks. The none linearity of the castle means that at anyone time multiple paths will be open to you, which allows you to not have to kill bosses in the “preferred order”. Or at least the castle feels so intuitively designed that I naturally found my way to bosses without the need for a guide and felt like I was discovering things in my ow order.

You also get a dodge button. No this isn’t 3d rolling around a target, but mastering block and dodge is how you beat the first boss (Slogra and Gaibon). This is boss I died on most – apart from Galamoth trying to figure him out is a pain! -, but once you realise that some bosses require you to patiently hit and run, the game suddenly makes more sense. 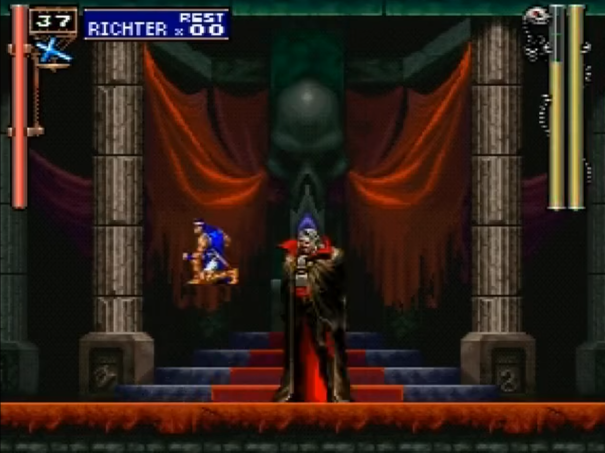 The end of Rondo of Blood serves as the tutorial

I found SotN to be pretty easy to be honest, I don’t know if it is regarded as a “hard” game I certainly know a few people who can’t beat it. So I guess that would be my one criticism. Other than Slogra and Gaibon where I died roughly 10 times trying to learn the games mechanics, I didn’t die on a single boss more than twice (Galamoth being the exception) and most bosses including Shaft and Dracula I killed first time. The only part of the game where I got stuck was not knowing that I need a Magical McGuffin from a secret room to be able to attack Shaft instead of the possessed Richter for that boss fight. I know some weapons counter some bosses, but I never needed them. I just ran up to enemies and punched them with the coolest looking sword I had at that moment. So I feel Dracula could have tried harder with his minions.

The only other thing I struggled with was the Inverted Castle. Not the enemies, but the vertigo type nausea it was inducing. I had to really break up my gameplays with frequent breaks as playing in the Inverted Castle was simply making me feel a little queasy. I think this is more me than poor game design, I simply couldn’t get my head around the castle being upside down and me walking on the roof.

There is the option to power level and stomp bosses, but I didn’t find the need to. I was around level 42 when I beat the game, I explored the castle fairly comprehensively but I never had to stop and grind to beat a boss, i certainly didn’t find all the items or secrets.

Galamoth is a turd

The story will make a little more sense if you have played other Castlevania. But basically, Symphony of the Night follows on from the ending of Rondo of Blood where Richter Belmont defeats Dracula (this serves as the tutorial). Richter is put under a spell by Shaft, a 70s Detective who swears a lot and looks cool as fuck. Which in turn means no Vampire Hunting Belmont can come and kill Dracula allowing Dracula to rise only a few years after the events of Rondo of Blood.

Fast forward 5 years, and now Alucard is attacking Castle Dracula due to the aforementioned lack of Belmont. He discovers Maria (from Rondo of Blood) and being a PS1 game she promptly pisses off to explore the castle on her lonesome. Death steals your powers and you are forced to fight the monsters of the castle as a lowly peasant until you reclaim all your bitching powers, conveniently held or guarded by the Castle’s 25 bosses. 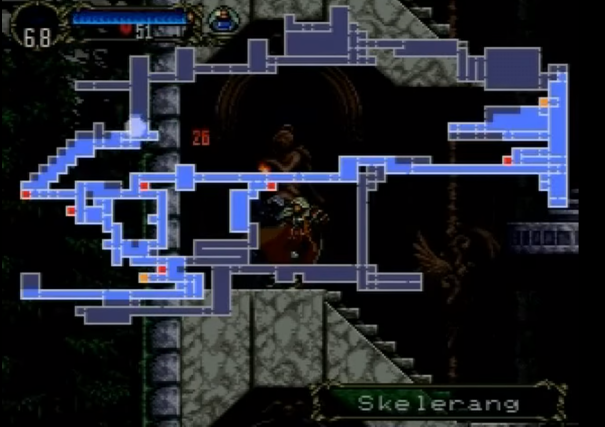 All hail our half inflated castle!

At this point SotN is certainly in my personal Top 10 games, but that isn’t to say the game is without flaws.

Firstly, I found the Voice Acting to be poor. The dialogue is shite, and the recorded voices are stilted. I know it was 1997, so I have to give it some credit I guess, as it is x1,000,000,000 better than that acting in the original Resident Evil.

Other than that… I hate unskipable dialogue. Especially before a boss you have died on a few times.

Turns out I couldn’t think of many negatives.

Ok, the Upside Down gives me a headache…

The soundtrack is amazing. It suddenly makes sense to me why the special edition of SotN came with a compact disc with the soundtrack and why that Special Edition sells for well over £200 on eBay. I have my favourites like the Marble Gallery and Dracula’s Castle themes, but the stand out is obviously I Am The Wind that plays over the end credits. I mean it REALLY stands out… It is a sappy love song that comes out of nowhere. It isn’t as though there is a running theme of love, no love interest for Alucard, just a quick hammy line of dialogue towards the end about Dracula becoming evil  “You have been doomed ever since you lost the ability to love“.

I Am The Wind by Cynthia Harrell

So SotN more than lived up to it’s own hype, the controls were smoother than listening to a Michael Bublé album in a bubblebath while drinking a cold Piña Colada. The difficulty curve was spot on, and the entire game was intuitively designed that made searching and discovering new abilities a delight.

The soundtrack is good enough that I have listened to it on an endless loop for the last two weeks, and there is a tonne of things I didn’t discover. The amount of depth, and spells that Alucard can collect with button combinations to pull them off means a pro could piss through the game throwing hadukens. Me, I’m happy dodge rolling and smashing things in the face with pointy objects.

Cons: Galamoth is a sod, trying to figure out how to jump an turn into mist to get bat form. Voice Acting is pretty poor, unskippable dialogue

What it lacked in commercial success it more than made up with in critical praise, winning the PlayStation game of the year for 1998 SotN would go on to score mid 90 scores across the board.

14 comments on “Castlevania: Symphony of the Night. Konami (1997) PlayStation”