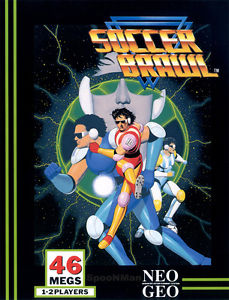 I’m back and have been summoned out of exile to review a crappy football (soccer) game and oh boy do I have the game for that!

I never went into this expecting great things, but still I hoped.

You get two modes, a league mode and a 2 player versus mode. Obviously League mode is my only real option as nobody will play this ass with me. Here you get to select between a massive 8 of the great footballing nations of the world: 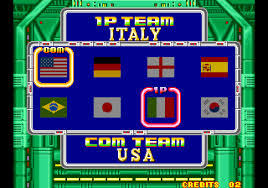 I would normally choose France but not today.

Anyway back to Soccer Brawl.

It’s like a blend of Speedball and Redcard not that you’ve played those either, but you play as robots and there areno rules, options, or quality.

First off lets start off with the controls, you have two buttons A & B each one does three things depending on if you are attacking or defending in theory! Most of the time I ended up jumping out of the way instead of actually sliding in for a hefty tackle, Adding to my disappointment if you miss the player they will usually manage to score on a rebound after your shot bounces off the keeper. 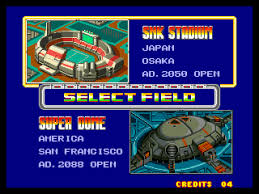 They have chose to only play as a 7 v 7 meaning the pitch isn’t overcrowded which is not bad. You have a Goalie, five normal players and “Head Master“, the Head Master is the “Ace striker“. The Head Master has a special power shot, a higher power, and a boost to speed and they can also use their elbows better. They are recognisable by the long flowing hair coming out the back of the helmet, a sort of David Ginola crossed with Petr Cech if you can imagine such things. 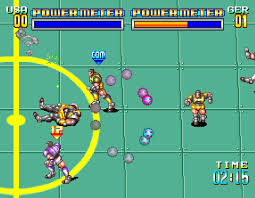 The special power shots are lame, but: 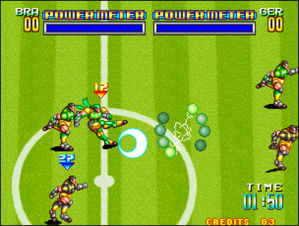 I did manage to get a few of these shots off but they never really did any damage to the scoreline.

The pitch is small and you can use the walls for rebounds so you don’t get throw-ins if it bounces back on the pitch. It makes it a pretty fast game but not that good.

If and when you draw a game it goes directly to a penalty shootout but what is weird is you only get 3 shots each and then if you are equal after that it finishes a draw and you have to continue and play again. This is clearly arcade bullshit, and unacceptable in home ports. 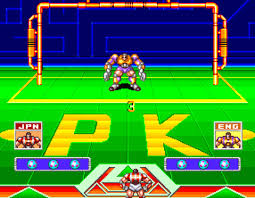 Graphically its not bad on the eyes, they haven’t gone for realism which helps. The kits sort of exist but for some reason England play in purple and orange. Maybe because they are a clown team?

The music and sound effects are typically 90’s Japanese electronic trash but it doesn’t get that annoying even after playing for a couple of hours. 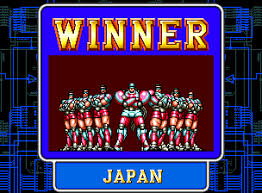 It would probably be a bit more fun to play against someone but you would still get bored after a while,but it does have more of a chance winning the World Cup than England.

It came out after the Speedball games and they were just better and had options of upgrading players, Soccer Brawl falls well short.

Cons: No France, pretty much everything else

Can’t find any, except blithering idiots giving it 5 stars on Nintendo eShop.