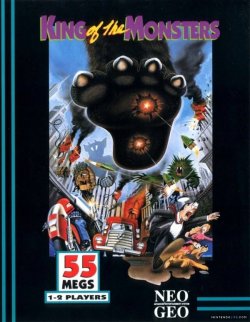 Basically, on paper this is a potentially perfect game.

OK, so the Gameplay is supposed to be a Tournament Fighter but The King of Monsters plays like a standard Beat ‘Em Up. Now Beat ‘Em Ups are great when done right so don’t take that as a criticism of that genre but Here TKOM gets it way too wrong on both counts. Firstly, there is no “move list” just mindlessly mash buttons. I beat the game doing nothing other than hammer 1 button. A Beat ‘Em Up would have you button mash but the pace of the game came from variety of enemies punctuated with a boss fight, or minigames, or special powers. Again, TKOM drops the ball as it is a one-on-one that just goes on forever.

This is not as interesting as it should be…

As you progress the 12 stages you fight the same 6 monsters in a row, once all are defeated you then fight the same monsters in the same order, just with a different city (the same 6 cities you’ve already fought in). This doesn’t make sense to me and is obviously lazy as hell on the developers behalf. But the worst thing is each level the opponent gets more health. Think a Capcom Beat Em Up with ever changing health bar colours. But you, you remain the same. I couldn’t swear to it, but I’m sure the enemy punches harder too. In a good Tournament Fighter the difficulty will go up by the opponent being better, quicker, tries more moves, doesn’t let you spam the punch. Here the damage just increases and they get more health. It makes fighting a chore, as unless you get good the fights start taking 5-6 minutes.

Since you get unlimited continues to keep trying you’ll never really fail. But it takes the computer about 2 minutes to kill you, there is a 3 minute time limit and when you die the time limit resets. The battle continues with you on full health and the computer where they were and if the time does run out you get gameover and therefore full health and the opponent will go up to about half. Potentially then running the risk of the tier running out. So if it looks like you’ll run out of time just put the pad down and let yourself die.

Finally to win, you need to pin the opponent like in a wrestling game. But sadly this harks back to a Simpsons Wrestling rather than a good game like No Mercy.

Again, none of this makes sense for a Tournament Fighter.

Ok, so as you fight you destroy the Japanese City the fight takes place in (Tokyo, Kobe, Hiroshima, Osaka, Kyoto and Okayama) and as you fight you trash the place. It looks great. Honestly. While you’re fighting the military will try to get involved, these serve as additional weapons for you to pick up or distractions as they shoot at you. It is a little bit like Rampage, just nowhere near as good.

It is a shame that this feature is wasted in such a sub-par game.

This is not as fun as it should be.

Pretty much all the characters play the same, but some characters are a little stronger versus others and will break out of grapples a little easier. There didn’t seem to be an obvious reason (ie fire beats water type rock/paper/scissors) but some enemies will be a little easier to fight against. This doesn’t even come close to countering the difficulty curve, so if you play the person your good against last they will still cheese you.

Did you ever think a game where you were not-Godzilla fighting other not-Godzillas and trashing Japanese cities could be boring? Obviously you wouldn’t think that was possible but it is. The King of Monsters is a boring button masher with no depth and such a limited move as to remove any skill means The King of Monsters is such a waster opportunity but the fact the trashing of a city is so fun and still looks pretty good it stops TKOM falling into the Shower of Shit Category.

Ultimetly it plays like an 8bit WWF game by LJN. That is not a good thing.