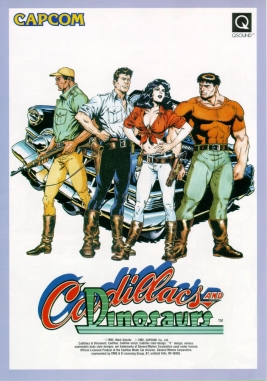 Designed as a tie in to a kids cartoon (I have never heard of it) and based on a comic book I have also never heard of (Xenozoic Tales), Cadillacs and Dinosaurs is one of those distant memories I have on days gone bye. I think I first played this game in Spain in the mid 90s in an arcade and I could never really track it down, you would think it would be easy as it is the one with Cadillacs and Dinosaurs. But you’d be surprised at how little either of those things feature in this game.

Set 500 years in the future (I think 2513), humans and dinosaurs live in peaceful harmony. That is until a stupid ass gang named the Black Marketeers decide to start fucking with the Dinosaurs which causes the angry dinosaurs to rampage.

In steps a collection of insert generic tropes to fight off the horde, each with their own generic background with serves no additional purpose.

In reality they all play the same with their stats not really making enough of a difference to the gameplay. 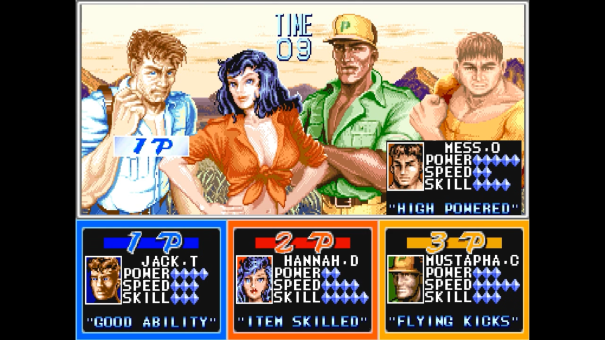 This is a side scrolling Beat ‘Em Up, so you scroll sideways and punch things till they are dead. It is very much like ALL Capcom beat ’em ups from the era in look and feel. Enemies are large and chunky in appearance, and they have yellow healthbars which turn red as they die. Some things will have white/blue/green/purple health, but just punch them and they die. 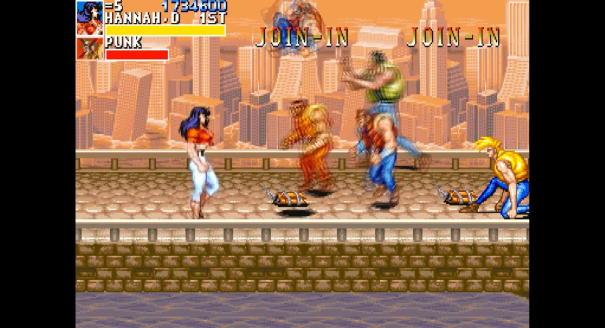 Whenever things move they blur a bit!

At 8 levels long C&D isn’t pushing the boat out or trying to do anything different to it’s peers, however th key for me is the battles become a bit boring. It isn’t Golden Axe style where you fight the same 3 enemies for the entire game they just get more health. You start to fight 7 or 8 people at once, and the crowd control becomes a little bit manic especially when you factor in that 2-4 of these enemies can be subbosses. It means the difficulty does become a bit of a chore. The credits were free for me on my revisit, but I reckon I easily used 15 continues to beat the game, which in old fashioned money would probably have been about £10 which puts it on a par with Bucky O’Hare and The Simpsons Arcade. 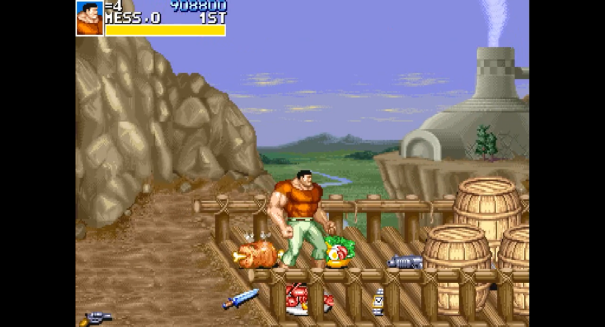 Serious Lack of Dinosaurs (but at least a Cadillac features)

To be honest, I expected 90% of the game to be whomping Dinosaurs and sadly this dream never came to fruition. The dinosaurs are “the villagers” helpless creatures in need of rescuing. The occasionally appear as rampaging creatures, but you’re really just supposed to avoid them. Instead, you’re fighting generic gangers. Fat Dude, skinny guy with a knife, blokes in differing coloured jackets to distinguish how hard they are, and then the usual over sized bosses.

The bosses are all pretty tame, and I can’t stress enough how disappointed I was to not be allowed to punch T-Rexes to death, the closest thing I got in my playthrough was the final boss. This dude (Dr Fessenden) injects himself with a serum that turns him into a 3 headed dinosaur with a weird baby foetus embedded in the stomach. 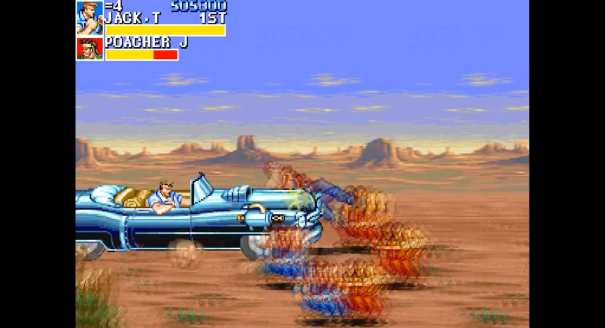 This level is legitemetly this blurry

Cadillacs and Dinosaurs is ok. It is fairly solid at what it does, the graphics look decent, and the premise is good. I am disappointed that it doesn’t really try. It never pushes the boat out and ultimately feels rather by the numbers.

I feel like this game should be scoring towards the 90s on premise alone, but as it is. It is just good, good is obviously a “good thing” but it does fall a little flat.

Cons: Falls a little flag for me