Bloodborne feels like a game that From Software really wanted to make. It feels almost the antithesis of Dark Souls 2, which to me felt like a semi-rushed contractual obligation rather than a labour of love.

Bloodborne is a game that is a Lovecraftian Inspired Dark Souls style Action RPG set in a vaguely Eastern European city.

Fucked if I know. But basically, you’re a hunter going around purging a city of its beasts. At some point birth/reincarnation comes into the story with a lot of grizzly abortion/miscarriage stuff creeps in, but like Dark Souls I have no fucking clue. Like seriously, I got to Mergo’s Wet Nurse and it only just clicked why there had been a baby crying most of the game.

This is what I like about From Software games, there is a rich and deep story buried in there but it is up to you to dig it out. Like the controls scheme you just have to figure the story out on your own.

There is no press X to not die, no exposition, no monologues, just “you’re in this fucked up land off you go and kill shit”. And from there it is up to you, want to know more about this giant blob monster? Well the blob monster isn’t going to tell you, you have to go read the wikis or item descriptions and piece the information together yourself. Want to know which area to go to next? Here’s a hint if some fucknozzle one-shots you, you’ve probably gone the wrong way or you’re just shit. It could be either, but there be no signposting here!

It’s great I love it and want to have it’s babies. 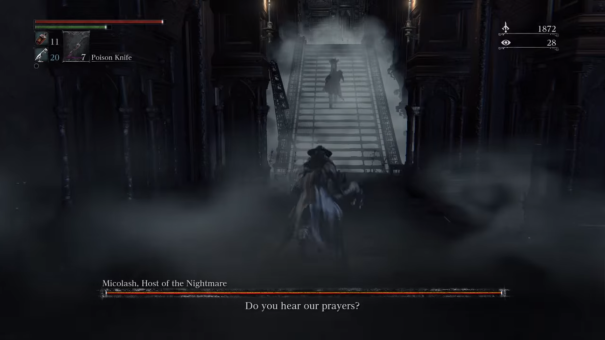 Bloodborne follows the Dark Souls template in that it is a third-person Action RPG game designed around slowly and patiently head butting concrete walls until you chip away at it enough so that you can proceed to the next concrete wall.

The key difference to Bloodborne is that the combat has almost been flipped, and that you’re encouraged to be aggressive. Not too aggressive, but you don’t get a shield or Havel Armour meaning that you can’t facetank the game and at some point you actually need to learn the games mechanics.

Rather than a shield you get a pistol. This isn’t a useful gun in terms of spamming fire and killing enemies from a distance, instead a sneaky well-timed shot will temporarily stun an enemy (bosses included) which will allow you to perform a devastating riposte (visceral attack). With Dark Souls I was able to facetank my way through it the first few times (and dodge roll the subsequent tines), and I never needed to learn to parry. But you ain’t doing that in Bloodborne bub.

To counter the inevitable wafflestomping you’ll receive from enemies and bosses you can gain back some of your health if you attack the enemy back quickly. It isn’t fool proof, but you can manage your health effectively with good counters. Just remember to dodge the fuck away before that overly telegraphed pound catches you a second time, or learn to use the fucking gun you shit-bearded wanker!

Another difference from Dark Souls is that each weapon has two modes, one is regular one handed weapon which gives you access to the terrible shield or your gun, the other is the mega-powerful but slow as molasses in winter two handed weapon of death. You can really fuck shit up with this weapon mode and throwing in combinations switching between the 2, but most bosses susceptible to a charged two handed attack, but if you miss-time the attack then the bosses weapon will be balls deep in your lung cavity and you’ll have a corpse run to contend with.So pros and cons to it…

Honestly didn’t realise how blue grey the game was!

Let’s be realistic, you’re here for the bosses, and Bloodborne has (mostly) the best boss design in the series. Dark Souls series has some cool bosses, like the Vagina Dragon, but more often than than not the series relied on generic dudes in armour or trash mob fights. And while there is no Vagina Dragon, most of the bosses are deformed monstrosities that are made up of your nightmares, or at least things that look like your momma.

Fine, the Spider in the lake is a trash fight, Shadows of Yharnam is a trash fight and the Celestial Emissary is something below a trash fight, but that’s only 3 bosses out of 20. There doesn’t seem to be obvious padding like in Dark Souls 2, but also Bloodborne introduces the boss phases that Dark Souls 3 put to great effect. Stomp a boss enough, and they’ll morph into something more fucked up, and gain an attack or two. This stops you settling into a routine of dodge stab dodge stab which keeps a boss fight more interesting.

One of the main reasons I prefer Dark Souls 1 over the other 2 is that everything is connected. The world is built around the story and the flow of the game and is not “insert boss here” and Bloodborne recaptures this. It can be frustrating figuring out where to go or where you’re going early on, but when you suddenly open a door and realise you are back at a lamp it all suddenly makes sense. The twists and turns suddenly become navigable and you realise that the level design is actually fairly intuitive. It won’t be at first, but it will click and when it does you’ll love it. 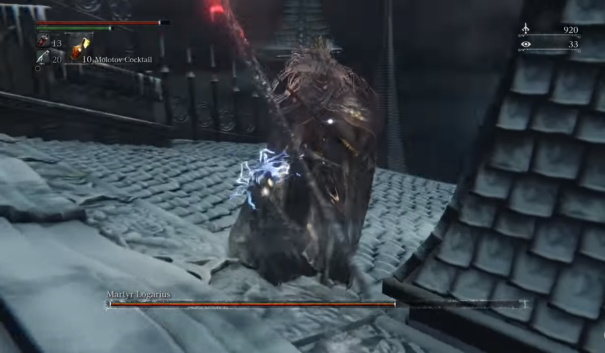 Some glitches are present, the first I noticed was that I kept getting stuck on scenery  and had to wait for enemy to kill me. I could never replicate this, but at least 5 times in the game I got stuck on some form of scenery. On the first boss I fought (goober on the bridge) I dodge rolled into the bridge and clipped through the scenery leaving me inside the bridge. I guess some speed runner would know how to exploit this, but I just stood there and took a few boss attacks to the chops so that I could retry it.

Now the single feature of Bloodborne that makes it worse than Dark Souls for me, is… having to grind Blood Vials. It is simply a faff, and while it makes sense fluffwise I hate it. It is too punitive to a new player as when you go to a new area you’ll have to tank hits because you don’t know the game, or that you need to learn a new boss. The Blood Vials would have worked better if it was introduced at New Game + or if more enemies dropped them but they don’t. It is annoying as all hell having to grind an area so beneath you that killing 100 men won’t net you a quarter of a level. The problem is that the only two areas that drop Blood Vials are the starter Yharnam Area, and near the Witches boss fight. The SoulsBorne series is hard, I get that, but this is punishing you for not having already beaten the game on a first play.

Final boss, he be a speedy bastard! Hope you learnt riposte!

Bloodborne is easily better than Dark Souls 2, and the features that Dark Souls 3 uses make a bit more sense here. The world/character/monster design feels more creative and you can just tell this was the game From Software wanted to make.

If you have played Dark Souls you’ll most likely like this, but the ebb and flow of combat is totally different, so don’t expect to one shot every boss first time if you’re a Dark Souls regular as you WILL need to relearn the rules and learn the all important riposte attack. This means Bloodborne is hard, and some bosses can frustrate due to their aggressive attack patterns, but stick with it and you will love it. Seriously, the bosses very rarely let up enough for you to heal.

Cons: some trash bosses, Vicar Amelia felt like an impenetrable wall of death

Bloodborne gained universal praise and scored well into the 90s.