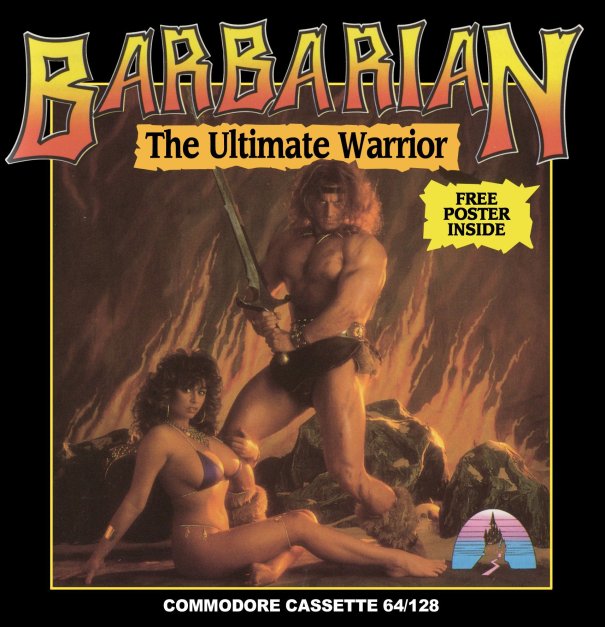 I’ll be honest, I am only playing this game because I am hoping at some point the WWF Wrestl’sUltimate Warrior’s theme tune is played contravening all copyright protection at some point in the game.

But since I know the likelihood of this is fairly low I’ll see if Barbarian is a decent game.

Barbarian is another Tournament Fighter that does its own thing. International Karate was a little bit odd as that was Karate rules, and was a slow/methodical fighter. Barbarian is actually impressively quick for a Commodore game released in 1987. This isn’t to say it isn’t clunky as all hell, but you at least feel as though the same isn’t a series of PowerPoint slides. 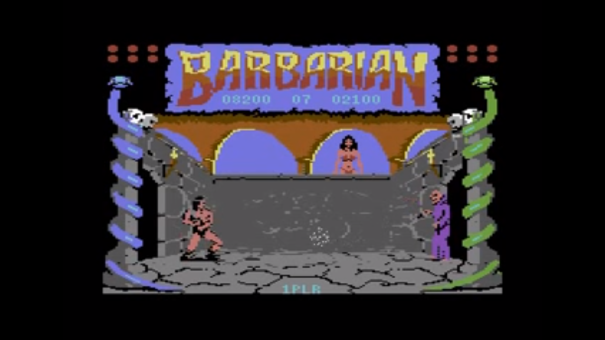 Dunno. Don’t think there is one, so let’s just say it is the plot to Conan the Barbarian. At this point I’d usually copy and paste the story from Wikipedia but fuck me that is a convoluted plot! So;

Like International Karate there is no whacky pool of characters to chose from, you start the game and off you go chopping shit up with your bastard sword of bastardary. You whomp away at the enemies healthbar and try to avoid them whomping you back.

One of the unique features, that I honestly can’t think of a game that betters this, is that you can insta-win most battles by decapitation your foe. Time and execute (hur hur) a charged neck height sword attack and you will chop off the enemies head, thus winning the match. This isn’t a “fatality” that occurs at the end of a round, you can do this at the start of the round as your first attack.

Granted in 2 player mode ALL bouts will decend into two of you spamming helicopter swords, but vs the computer they’ll most likely stand back and bonk you on the noggin with bitter indifference .

Barbarian isn’t especially hard, the main difficulty comes from try in to figure out moves on a frigging keyboard. The only thing ting you really need to learn is patience, as some fights will last what feels like 4-5 minutes as the enemy just turtles up and only tries to bop you on the counter.

Barbarian was praised for its unique humour and looking on as a curmudgeonly early 30s douchebag I am struggling to notice any humour. Literally the only thing I can think of is at the end of the round a goblin walks on stage and removes your defeated foe. 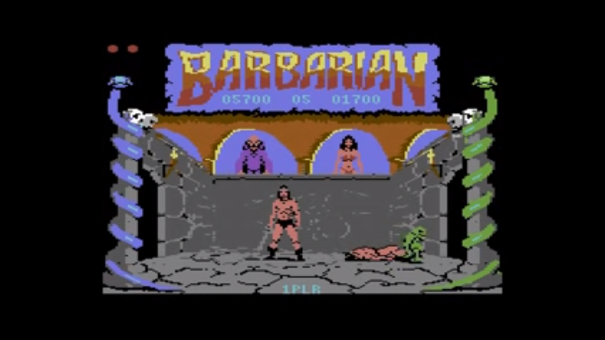 Apparently this is humorous.

Barbarian was one if those early controversial games and this stemmed from the fact it never marketed itself as a kiddies game. See in 1987 videogames were still seen as for “children” so when the box art featured a topless model who isn’t topless in the artwork (Maria Whittaker) and none other than Gladiators *Wolf* Michael Van Wijk it sent the moral compass spinning in Middle England (and presumably the Bible Belt in the US). This is all obviously very tame, as no titties were displayed, but a lady in skimpy bikini is always going to be the downfall of modern society.

This is as close as I get to the ladies…

Barbarian is actually pretty good all things considered. The combat is still a little slow and clunky and obviously doesn’t hold a candle to anything released on the Super Nintendo or later, but as a Commodore 64 game it is certainly one of the better games on that console.

Pros: apparently the game is humorous, Gladiators’ The Wolf!

Praised for the gore, and an apparent fast and furious gameplay Barbarian seemed to review well. However, I can’t see any scores for it.