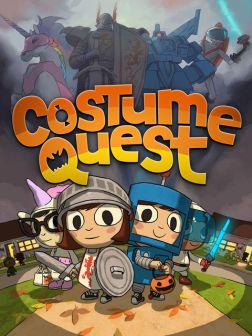 I kid of course, apples and oranges and all that. But there are a few similarities between the Netflix smash hit and this little gem from Double Fine – the small town Halloween setting, the group of plucky young nerdy heroes, the blurred lines between imagination and reality. No Demigorgons though. For my now almost traditional Halloween review though, what better to look at than a game that is literally about Halloween? (Plus my pants remain thoroughly crapped in from binge playing Outlast for last years review).

You choose to play as one of the young twins Wren or Reynold, who have just moved to a new town. Your Mother insists to you both that your night of trick-or-treating is the perfect night to make friends, and so you don your costumes and head out. The character you don’t choose to play as is dressed as a piece of candy corn (we have no U.K equivalent to this, and I’ve never eaten any. Feel free to send us some, as we are nothing if not avid snackers), and is promptly snatched away by a monster with a sweet tooth. It’s up to you now, to assemble a party, beat the monster, and get home before curfew.

This bag of bullshit was giving out raisins.

Costume Quest honestly plays out like an episode of a 90’s Nickelodeon show, and – thanks in no small part to it’s childlike sense of wonder – works all the better for it. And when you consider that the masterminds at work here are the guys behind Psychonauts and Brütal Legend, you can bet there’s more than a touch of offbeat humour to the proceedings.

Put simply, Costume Quest is absolutely charming from top to bottom. From the genuinely funny and adorable cel shaded costumes and characters, to the cosy suburban Halloween setting, to the sound of kids having a blast on Halloween, it’s and absolute delight to look at and listen to. It evokes that feeling of watching Nightmare Before Christmas for the first time as a child, before you realised how much musicals and shit beanie hats actually piss you off. Or in Jamie’s case, just Tim Burton in general. 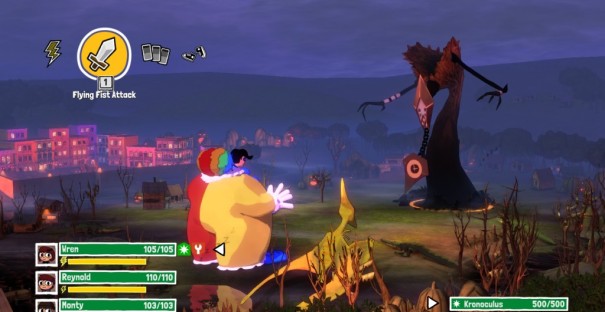 My personal favourite is when you get to play as a side of fries.

It’s hard for me to call Costume Quest anything other than an RPG-lite. Make no mistake, Costume Quest is definitely an RPG, but it has a sense of finality in that you can collect and do absolutely everything with little to no replay value. All in all, you can handily beat Costume Quest in just a handful of hours.

That shouldn’t dissuade you from giving it a go though. The sense that you can collect and do everything makes Costume Quest quite an addictive play though, which probably explains why I hammered through it so quickly. The core gameplay is split in two, and involves trick or treating to collect quests, or candy to use as currency to buy upgrades for your costume. The meatier half of the game comes in the form of turn based battles with random monsters, wherein your costumes play out as their fully realized forms – if you’re dressed as a robot, you’ll be playing as a giant robot in battle, complete with a unique moveset. It’s a terrific idea, and one that helps to alleviate the monotony that can often come with continuous turn based battles.

Whilst this is all fun, the constant ‘collect this and backtrack to here’ can get a touch repetitive at times, particularly for anyone who likes their RPG’s with a bit more meat on their bones.

An oft overlooked little gem, with some really nifty little ideas. It can get a little collect-em-up heavy at times, and there’s a lot of backtracking that can wear quite thin; but damn it all this is Double Fine, the masters of making games that are objectively flawed, but undeniably fun, charming and often hilarious. Certainly worth a look for anyone with a passing interest in RPG’s. Or potentially Furries. I promised myself that I wasn’t going to write that. No Furries, please.

Cons : Very short, and a bit shallow. And those bloody nostalgia fans again.

Costume Quest received pretty high marks when it was released on Xbox Live Arcade back in 2010, with particular praise for it’s style and setting, but with a few digs at it’s repetitiveness.