What better way to indulge my current two favourite hobbies of Warhammer (Horus Heresy) and Retro Gaming than to play a game that manages to combine the two?

Back in 1996 I temporarily collected Warhammer 40k and owned this game, and to be honest, I remember hating Space Hulk and can remember not getting very far.

So with that, let’s get nerdy, don the Terminator armour of the Blood Angels, and smoosh the faces of the Tyranids and see if Space Hulk has aged like a fine wine.

Bare with me, as I have no fucking clue what is going on.

Nope, not a clue.

Get used to this…

Basically, Space Hulk is a hybrid of tactical RPG-FPS and plays just as easily as you’d imagine on a PlayStation. IE, it doesn’t play well. You can switch to a tactical mode and issue commands, which don’t seem to work (they do later in the game). You can switch between Terminators, which doesn’t seem to work (again works later). And you get as many lives as you have Terminators – mission requirements state how many need to survive – but if you die, gameover (guess what, lives unlock later).

This isn’t to say Space Hulk is bad, it just plays like shit, looks like shit, is weird, and semi-turnbased. The problem lies in an obtuse difficulty curve, and a manual that is like a War and Peace.

But really, the ultimate problem game doesn’t make a lot of sense from a video gaming angle. 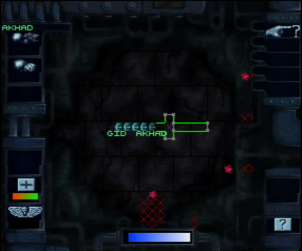 Oddly to explain this game you really need to know your early edition 40k rules (which I don’t). Basically, you’re a Terminator, a super hard badass of the Blood Angel chapter, but you have 1 not so small problem. Genestealers cut through your manly terminator armour in 1 piss willow attack. This is incongruous to a regular gamer person who doesn’t have a profound knowledge of the Warhammer universe. As dudes effectively in tank armour should be hard.

But according to the Warhammer rule set and the Space Hulk board game, this is absolutely the norm and Genestealers sexually molest terminator armour.

The tactical screens make sense from a Wargaming perspective as it allows you to view things from a top down perspective. Also the turn based nature of combat ties in nicely with the tabletop game. But as a videogame I am still utterly baffled.

Combat is first person, and you can shoot in what feels like real-time. However, if an enemy gets close, it then switches to a turn based attack system. This is where you die, as if you don’t perfectly time your block or attack, you’re dead, and since this switch in real time and turnbased come out the blue you’ll die.

This could have been remedied if there was some sort of tutorial, or training missions as part of the main game which introduce features, or even a steady learning curve. Instead you’re thrown on the deep end with your Terminator armour to drown like the little bitch you are.

However, there are training missions, but you’d need to figure out they are buried in a deeply flawed user interface.

X chooses the game, but hidden under it are the other options.

The many joys of a Genestealer punch to the face

You do get a minimap that displays nearby enemies, but often the too-many-armed BASTARDS will just appear and skull fuck your intestines out of your arse.

On top of this, the game is not clear in terms of objectives on some missions. I can’t get off the 2nd level. I can get to the end, kill all enemies, do the objective. The level just won’t end. I am still unsure how or why this happens, but I restarted the game did the same things, and was able to progress to the next level. To be honest, this is a game breaking glitch that occurs way too often.

After that? well there is some serious fan service to the Warhammer community. You can play the Space Hulk board game missions in the game, but you can also play some historical battles from 40k, and you can play the PC Space Hulk Missions. But by this point I had lost interest, and while I tried a few missions once I gave up after miscellaneous fail states. But these missions will be of interest to the hardcore fan.

Yeah Space Hulk is shit and it is completely unplayable now. Graphically it didn’t look good in 1996, and it has aged just as well as a wine that has been left open and in the sun.

The controls are clunky as hell and there is no “aim”. It really is terrible to play.

That said, Space Hulk falls short of the Shower of Shit category by the virtue it does actually try, and there are nice touches in terms of details and fan service. It is however, unplayable.

Pros: fan service up the wazoo

Cons: it really is shitty

Space Hulk did not score well at release and got scores in the low 60s.