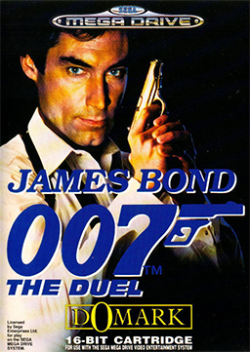 Coming four years after Timothy Dalton’s last filmic appearance as the suave secret agent, The Duel marks the last official appearance of Dalton as 007. So what game will they give him as an official send off?

The Duel is a side-scrolling action platformer/run and gun an sadly the problems with the game appear almost instantly since the platforming is weak as shit, and the run and gun is terrible.

For starters EVERYTHING is delayed, enemies are super quick and the only way to hit them and not take damage is to duck, but ducking takes ages. On top of the delay in ducking there is also an issue with you simply shooting downwards if you try to be too quick with the controls, as if you don’t allow for what tells like a full second between you pressing duck and shooting, you’ll shoot downward. As you can imagine this is deeply frustrating as you constantly get shot as you become flustered and fail in either ducking or shooting the enemy.

Next, we have terrible oddly precise movements. Bond feels really gangly and awkward to move, and you have to be pixel perfect to climb a ladder, this isn’t game breaking like the shooting, but it is annoying considering there are so many bloody ladders scattered throughout.

Next next, Bond jumps like Yoda in Attack of the Clones, that is to say he leaps like a fucking frog Jedi. Scale-wise he must be jumping over 12 feet, but he also pulls off a DOUBLE forward somersault while jumping. This is very strange, as Bond showing such flair and acrobatic prowess jars awkwardly with the stiff controls and stilted movement. 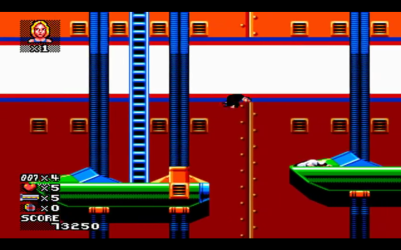 The point of the game?

Each level has Bond rescuing a set number of female hostages, only female, no blokes get captured on this secret lair of an evil dude, and as each hostage is squirreled away and hidden throughout the level, getting lost is the name of the game.

It means levels are fairly open and have a lot of paths, but actually, in an odd twist, the levels are surprisingly linear. Yes you can go up different stairs or ladders, but they are all 99% dead ends! And this doesn’t  improve on later levels when there are more hostages to rescue, it means that each level is a tedious as you simply follow the path to find everyone. Realise that one of 30 ladders was a “hidden” hostage and then have to go schlep. It is honest to god a bastard of shit game design. 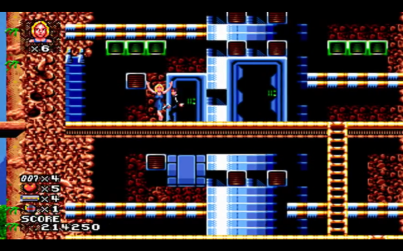 Once you save the last hostage you then need to defuse a bomb, and then escape the level within a time limt. Now I’ll be honest, I can’t do this. Even watching good players speed running they only make it to the exit with seconds to spare. As an incompetent luddite I die here and then turn the shit off. And if you have gone back to an earlier part of the level to rescue that one hostage you missed then game over man, game over (well, a life lost).

During the levels you do get to fight some classic Bond villains in Jaws, Baron Samedi, and Oddjob. However it is all a little too easy and cheeseable, for instance, you can kill Jaws by standing on a staircase and shooting at him as he runs backwards and forwards out of his attack pattern area. 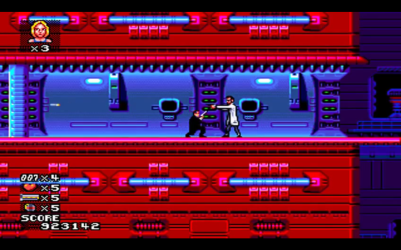 Why is ducking so freaking awkward?!

Plus, there are only 4 levels… 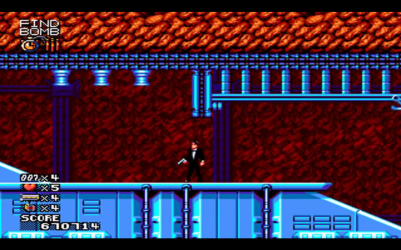 The Duel feels borderline broken, the awkward controls are unforgivable and you would think with only 4 levels that they would have had time to focus on refining mechanics as there was no obvious rush to release the game. As it stands it is mediocre and not worth your time.