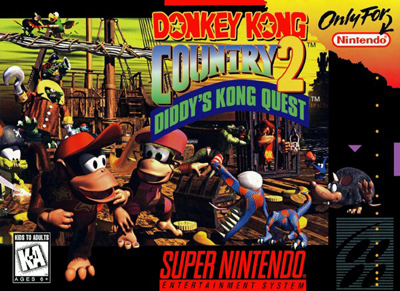 The absolute titanium balls on Rare, eh? Given creative control of one of Nintendo’s most beloved mascots in Donkey Kong, Rare proceeded to take the proverbial mile, creating it’s own lore and characters for the first game. A smash hit, it allowed them even more creative freedom – to the point where they made a Donkey Kong game WITHOUT DONKEY KONG IN IT. I like to think that Rare at this point was being run by nihilistic anime edge-lords. How else do you explain Kiddy Kong?

It’s the Mario plot, but the part of Princess Peach is being played by Donkey Kong. Do you care? Does it matter? Next!

Though using the same engine, DKC2 looks a damn sight better than it’s predecessor. The theme switches up slightly from the heavily jungle themed first game to more of a pirate theme. That’s not to say there aren’t other level types – including ice, lava, sunken ship and carnival levels. Just the variety compared to the first game (jungle, mine, jungle, mine, temple, jungle, mine) makes DKC2 seem like the more interesting proposition. The soundtrack is similarly superb, each catchy ditty being tailor made to suit the aesthetic of it’s level.

Odd place for that sort of bank…

It isn’t a unanimous opinion, but it’s certainly popular opinion that DKC2 is superior to the original game. And I am hugely inclined to agree. On the surface, sure, it seems like the same game all over again. The thing that separates them is the sheer variety on offer in DKC2’s levels. There’s a different play mechanic on almost every single level (it might even be every level, I only really clocked it about a third of the way through…shut up, I’m not getting paid to factcheck. Or at all.), be it adding sliding doors to mine-cart levels, playing as a spider, parrot or snake, or even a good old fashioned ‘the-floor-is-lava-and-it’s-a-comin’-this-way’. The benefit here is not being downtrodden by a certain ‘type’ of level that you just can’t get good at, as the second you beat a level, you never have to think about it’s dumb face again. Unless you’re a completionist who missed the banana coins. In which case, suck it up. Even the boss battles switch things up from the first game, eschewing rehashing the bosses later in the game in favour of keeping you on your toes.

These are at the end of every level. Go for the lives, you’ll need them.

Switching between Diddy and Dixie takes a little getting used to after the first game, as the differences between the two are not as readily apparent as they are between Diddy and Donkey. In fact, they’re pretty minuscule aside from Dixie nifty hair attacks and hovering. That said, they both have their own level complete animation, as Diddy throws b-boy poses whilst holding a boombox, and Dixie shreds some savage licks on her guitar. And I honestly don’t know which one I love more. The guitar. It’s the guitar.

Theoretically, DKC 2 could’ve served as nothing more than a glorified expansion to the first game, albeit one with two lightweight chimps replacing the powerhouse DK. It would’ve been easy for Rare to do, and still would’ve shifted by the bucketload. Instead, DKC2 is an immaculate polishing of it’s predecessor, improving on it in every way. Bravo, you ghost of a shell of a husk of a company.