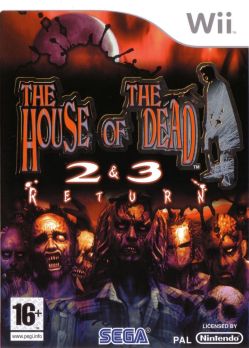 Return is a faux-light gun game. You use the WiiMote to point at a screen and you pew. You can use the Wii Plastic Adapter Thingy as a gun housing, but to be honest it is such an uncomfortable peripheral I use the WiiMote on its own rather than the plastic housing.

Reloading is a pain, as rather than shooting off screen, you’re encouraged to whip the WiiMote. When this works, great, but a lot of the time it simply doesn’t work and you’ll take damage as your gun refuses to reload. This might be remedied with the advanced WiiMote with the better motion controls, but with the OG pad it will sometimes not register the reload when I tried. 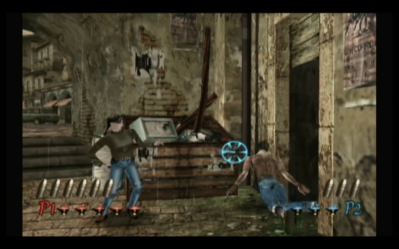 Both games are almost exactly like the home ports of the standard version and I can’t tell the difference between them.

There is a lack of new features, so don’t expect a cool new mode or special missions. Instead what you get is an obnoxiously loud WiiMote gun sound. It is so loud I sellotaped the speakers on the pad to dull the sound. It is impossibly stupid to have it that loud especially when there is not a volume option for the WiiMote and makes the game a little unplayable as you’ll annoy any house mates.

Other than that, You can watch tutorial videos, that really is it.

Somehow they had made two average shooters worse. The shooting is made weak by having to hold the WiiMote, or using the hideous plastic holder. The WiiMote noise is game ruiningly loud, and there are no features to make the game worthwhile if you already own the “proper” versions with decent gun support.

Pros: 2 games for the price of one

Universally scoring 5/10 or 6/10, Return was criticised for lacking any extra features and may only appeal to hardcore fans.