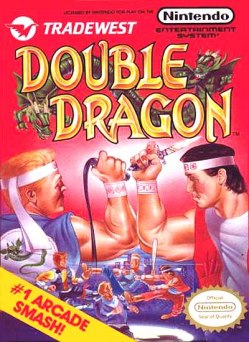 Double Dragon didn’t actually get a PAL release according to Wikipedia, which is news to me, as I swear blind I played this as a kid so I am a little confused. Anyhow, Double Dragon II was one of the first games we reviewed, so I am going to punch and kick my way to inevitable death on the Wii Virtual Console version.

Double Dragon is a beat ’em up, and while not the first beat ’em up, certainly was the first “big” one and  surprisingly, there is a large level of strategy and depth in a game that *IS* a bit of a mindless button masher.

When you punch or kick people you get points, get 1000 points and you level up; gaining new skills like the ability to jump, and then jump kick. Strategy comes in as if you use the punch, you gain almost double the points so you level a hell of a lot quicker. However, punching is more dangerous as there is no stun lock on enemies. This means enemies will whomp you while you’re whomping them, it is a battle of attrition that will often end in a Rocky III double knock out.

Trust me, you are getting punched at same time ad you punching them

As you slowly unlock more moves, like grapples and back attacks you’ll slowly become more useful, and as none of these unlocks are mentioned you could feasibly not know they are unlocked. It means you’re encouraged to experiment. The first moves to be unlocked are the jump attacks, so you’ll notice early the leveling system. So one you stop noticing upgrades, that’s the hint for you to experiment.

Alright, so Double Dragon is unfairly hard. The fact that enemies can hit you while you’re hitting them, the lack of recovery time and how close they spawn to you all mean you will take endless cheap hits. It requires a lot of persistence and trial and error, as each boss or enemy has a way of being cheesed, but you will have to sink a lot of time in the game to figure this out. But, there are only 4 missions so you can usually get to where you failed quickly and make a little more progress each time. 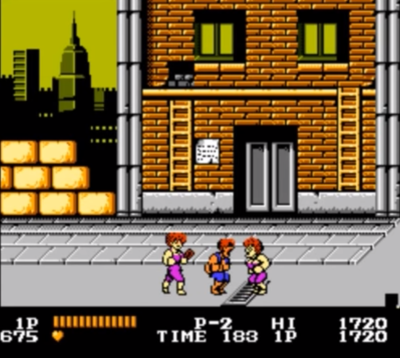 The music is a very short mixed bag. The intro to levels music sounds like it wasn’t finished, the musical score seems to be missing half a bar and doesn’t “go anywhere”. However the in game music is appropriate, as it kicks fucking arse.

Throw the bastard to their death! That’ll show ’em

I actually like Double Dragon. It is impossibly hard, and I can’t beat the game. But there is so much depth to it.

There are obviously many better games out there, and while this won’t be everyone’s cup of tea due to the difficulty it is worth checking out as a curiosity piece. Don’t expect it to blow your mind, but it is solid enough, and fun in short bursts.

Cons: Hard, actually only 20 minutes long if you can beat it

Double Dragon reviewed well, and scored in the 80s almost across the board.