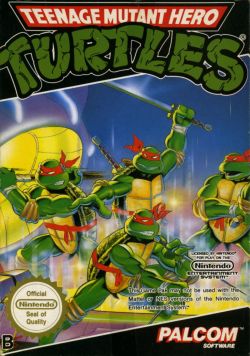 The original TMNT game gets a lot of bad press, and I am fairly sure this is entirely down to an Angry Video Game Nerd video way back in the day, as almost everybody that bangs on about it being bad talks about the Dam level. So obviously I thought I’d go back and see what it is like and how far I can get.

Turns out not very far, as the game is fucking hard. But the Dam? Well that is a relative piece of piss.

But anyway, TMNT is an action platformer, you take on the role of each of the 4 turtles with their unique weaponry. As usual Raphael gets a raw deal with his useless dinner forks, Mikey maybe a party dude but his attack range is only marginally better than Raph, and then we have the two useful party members ol’swordy and bloke with MASSIVE stick. In effect what this means is you use Mikey and Raph for plowing through things and platforming and Leo/Donny for fighting. There is supposed to be a difference between the damage done by each character weapon but I honestly can’t tell. 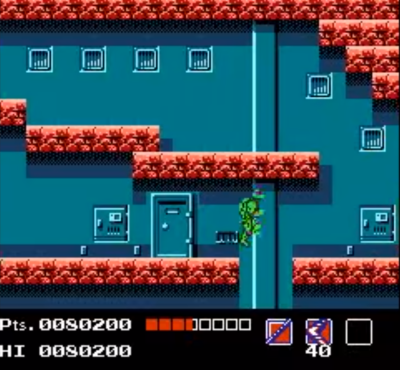 I find these the hardest jumps

Alright, so the game isn’t “good”, and it certainly is frustrating at times to the point of feeling broken.

Enemies have an awful RNGesus to them, which means revisiting a room will see a potentially different set of enemies spawning (this can even happen mid level), which makes planning hard and can be very frustrating when you keep failing on a jump. To make matters worse, some enemy spawn points are awful, as some ladders will take you up to instahits, or some blind jumps will have instaspawn enemies that knock you back into water, which means you’ll have to redo entire sections.

The platforming is also very annoying as some jumps are frustrating in their precision or awkwardness of obstacle placement. But what starts to become game breaking is the fucking instadeath spikes before the Mouser boss. Up to this point, while difficult, it is fair. It is at this point the game crosses the line into pad smashing bullshit. Mega Man 2 has similar instadeath, but Mega Man 2 has infinite continues and short levels, meaning constantly failing allows you to retry quickly. In Turtles, you have to redo the section, and if you die it is back to the start of the level and since there are only 2 continues it feels VERY unfair.

On top of the instadeath, the enemies become much more difficult to beat, with people like the rocketpack ninjas taking 2-3 hits from your super scroll weapon or 5ish hits with weapons. It means that if you haven’t item farmed section of the game are pretty much unbeatable.

To counter some of this you can pick up pizza for health refills, a quarter slice gives you a quarter health, half gives half, full gives full, and since most pizzas respawn when you leave a room, you can farm your way back to full health in next to no time. But remember to farm the powerups too!!

The enemy selection is odd, but personally I don’t have an issue with it. There are Foot Clan, Mousers, Bebop, Rocksteady, the Shredder, and the GOD DAMN TECHNODROME, so most of what you’d expect does make an appearance. However some of the enemies don’t make a lot of sense to me as a fan of the 80s cartoon. None of this bothers me though as weird flame monsters and chainsaw dude are at least interesting, and the core antagonists from the show do make an appearance (apart from Krang).

The plot is a little bit all over the place, firstly you’re rescuing April O’Neil, then stopping a Dam exploding, then rescuing Splinter, then chasing a blimp, eventually raiding the Technodrome and turning Master Splinter back into a human.

It means there is no coherent overarching story, but each mission does have a reason for your escapades.

Alright, so I don’t like the game and sticking it out and trying to get as far as I could simply wasn’t worth it.

What is ultimately wrong with the game is that it becomes unfairly hard and simply becomes unplayable to all but a few truly dedicated players.

Things like needing items  (ninja rope and ninja scroll) to advance that can conceivably not spawn for you due to rng, all leads to tedious grind and farming.

Frustrating jumps caused by low roof,s and knockback don’t make the regular platforms unplayable but they mean it isn’t fun. And then the instadeath, is unforgivable in how it is introduced.

So yeah, the Angry Video Game Nerd was right, just not about the right bits.

Cons: Raph and Mikey are useless, simply too hard