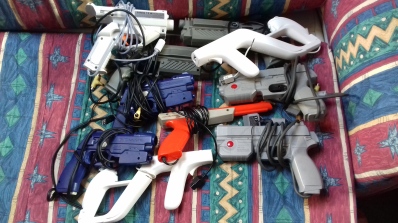 I love Light Gun Games, but what about the guns themselves? are they any good?

Well wonder no more, for I have gotten my hands on as many as I can and played as many games as possible with them,. So here is my none definitive list* of best Light Gun Guns. I will rate them on the following:

I will only include “main” guns that were released in the UK that I can get my hands on, they can either be first or 3rd party guns but they need to have sold more than three guns. So that weird ultra realistic Chinese import you had and loved doesn’t count, or the JAP/US only guns. I don’t do imports, but if you have one let me know and I’ll consider adding it.

* I am not including consoles that have wooden panelling or on-screen displays that make the NES look ultra Hi-Def.
** Where prices are stated the UK price is based on what I consider reasonable on eBay, the US is rounded up or down. Conversion based on exchange rates in May 2017

I was on the fence about including this, as it sold like shit in the UK and it was supported woefully, but I do like to suffer for my art. Designed like a bright Orange Magnum it looked good for a Light Gun. The handle is a little small for me and the curve at the top of the gun means the trigger is also too small for me.

The 10 games it was supported on where mostly steaming piles of ass, so it is difficult to score this one too highly.

Overall: 16
There are no worthwhile games on this console.

The “Official” Third party gun that is frankly a little bizarre, it is a pistol, but designed to look like a semi automatic machine gun, it has a slot where you can insert a memory card and use it as a reload clip (take it out and put it in again) and it has all the extra XBOX buttons, meaning it in theory would be very good on a longer form game.

However, there is an uncomfortable grip on the back that means you need Viking hands to get a proper grip, and there is a sharp button that scrapes the inside of your hand when holding it…

It had 1 game released for it. It is cheap to buy, but you’d be buying it for House of the Dead 3

Overall: 18
House of the Dead 3 is the one and only game

Pretty much the same as the 3DO gun, just blue. Awkward shape and limited game support. But wins out by virtue of being relatively cheap to buy. Also has a terrible game selection.

OK, it makes sense why SNES made a silly ass bazooka now. What you get here is a worse designed gun, that as a child is unwieldy and as an adult is clunky and impractical

There were 13 games, but 8 of these needed the Sega CD add-on making this a joke in terms of value for money for games, but the gun itself is often less than £10 ($13) and can be found complete in box for £15.

Overall: 19
Lethal Enforcers I and II were as good as it gets.

Jesus this thing is stupid. Seriously, who thought a bazooka was a good i..d..e…a… Hang on, a bazooka is an AWESOME idea, sadly the gun isn’t. I had more fun playing Commando or Alien in the back garden than using it to play games. It took SIX “AA” batteries, that drained almost as quickly as a Sega Game Gear. The game support wasn’t the best and the games are somewhat overpriced nowadays, and it is ridiculously huge and impractical to use.

There were less than 10 proper light gun games released…

Overall: 20
Yoshi’s Safari is a relatively unknown gem, and a decent home version of the Terminator 2 arcade graced this machine.

A 3rd party gun that was designed almost exclusively for Lethal Enforcers, which is NOT a good game but was also supported most of the other games on the MD/CD. The gun was relatively comfortable, and was modelled on a revolver so if it wasn’t for being bright blue would look like a gun.

The guns are actually reasonably priced all things considered (less than £20 [$26ish]) too.

The gun is a little bit thick, and the handle can be a little uncomfortable to hold in the right hand, surprisingly it feels better in my left (I’m right handed). The gun looks a little strange, but that is because of the VMU slot at the back. Plus the inclusion of a D-Pad and buttons in a place you can actually reach mean it is a surprisingly good gun.

Overall: 25
Confidential Mission is the better of the two games released in PAL, the other being House of the Dead 2.

The WII despite its popularity didn’t do very much, and certainly wasn’t good at many things, after all it was a Gamecube with Motion Control(s). However it got a tonne of support for faux-light gun games. No it isn’t a “traditional” Light Gun experience, but it did its damdest to reignite a genre. Looking at the back catalog I am honestly amazed how many games were released as there seems to be 50+ Big Buck Hunting games alone!

But, the gun is badly shaped and causes severe wristpain if you have hands larger than a child or Donald Trump. The gun itself is just a plastic housing to hold the WIImote and Nunchuck, so expect these to be dirt cheap. Despite the gun itself being awful, it is worthwhile due to the game support.

Coming in Red, Blue and Black there were almost as many colours for this gun as there were games. However, super accurate for the era. The games were pretty good to. And while the gun is a little heavy it feels comfortable.

Working on two consoles is a major bonus, though due to having an oversized input module it can be awkward to insert two guns on the small PSOne models. There was a nifty light that flashed when the trigger was pulled giving it a sci-fi feel that was perfect for games like Judge Dredd, as well as cheat controls like rapid fire and slow motion options added some fun elements to the gun.

The gun is a little heavy, and the trigger has no resistance meaning sometimes you forget you’ve pulled the trigger. There is also a tiny bit of delay between shooting and shots being registered.

There weren’t many games released on the Saturn that were light gun compatible, and this only works on pre-GCon games on PS1, but between the two consoles you get a decent catalog of games. But the shooting does feel weak.

Overall: 30
Too many to mention, but  Die Hard Trilogy, Area 51, Crypt Killer, but Virtua Cop 1 and 2 make this a worthwhile investment

An all round better gun than the NES Zapper, it is slightly more accurate, with a less obnoxious noise from the trigger. Like the NES Zapper there is a nice weight to it, and it is comfortable to hold.

A lot were sold, so they are easy to collect, though there were about 10 games released for it.

Sorry guys the NES Zapper isn’t the best. It looks good enough whether you have the Orange Version or the OG “realistic” U.S model, and it is confortable to hold but the trigger is slightly stiff, and makes an awful clicky noise when pulled. The NES was adequately supported for light gun games, and tonnes were sold meaning collecting Light Gun Games on the NES is easy.

Though the gun doesn’t feel the most accurate but was supported by around 20 games.

Overall: 31
Wild Gunman and Hogan’s Alley are the highlights. Special mention to Duck Hunt though

This gun is helped by having some of the best Namco light gun games ever made released for it, and it certainly helped that the gun was designed with this in mind. Accurate, fantastic catalogue of games, though, the amount of game supported is actually quite small.

The gun is confortable to hold, there is a satifying click when the trigger is pulled giving you enough feedback that you are pulling the trigger without being obnoxious like the NES Zapper.

With a cable that connects directly to the Video on the SCART signal means there is no delay, and everything is accurate. The bottons however are terrible placed, meaning playing Time Crisis without a footpedal attachment is slightly uncomfortable.

Overall: 38
Point Blank and Resident Evil: Survivor are pretty awesome, but the little known Point Blank 3 is by far the best.

Simply put, the best light gun out there. Dirt cheap to buy (always under £15 [$19], and what seems like hundreds of games but actually only had 11 full releases in PAL. The games aren’t as classic as the Golden Age Namco ones for PS1, bu they are fun, and the home port of Time Crisis II is genuinely brilliant.

The gun also had tonnes of buttons that were actually used, Resident Evil: Dead Aim is a proper Resident Evil game with light gun shooting, it is honeslty impressive how they got the gun to work so well for a claustrophobic survival horror. Also adding a reload button under the gun handle was genius from the ergonomics department.

The shooting is fast and accurate too.

Whadd’ya think? Did I miss something? Did I offend you by putting the NES Zapper that high?

My score system made the list a little interesting, so here is a quick list of best guns purely on does it actually work.