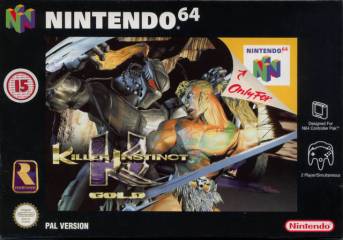 Killer Instinct was a pretty solid Tournament Fighter  with a combo system added a depth that newbs and pros could all have some fun. It did look like arse, and had a stupid difficulty at the end but what about the sequel?

So this is a Tournament Fighter, so you fight one-on-one against a multitude of strange creatures. It isn’t clear if Ultratech are still involved as the “story” has been trimmed. Most Fighters have a convoluted story that is tacked on underneath, Mortal Kombat has bullshit about Realms, Street Fighter has something that people bizarrely eat up, and Dead or Alive has 13 year old girls with huge boobs. Killer Instinct Gold seems to have nothing. I honestly can’t find any story.

What separates Killer Instinct from the other tournament fighters is a fairly impressive combo system. As somebody who is utterly terrible at fighters I am able to string some fairly impressive moves together. You CAN effectively button-mash your way through the game, though obviously getting good and learning moves will see more successes in your win/lose ratio.

Similar to ClayFighter and the first Killer Instinct each fight is best of 3, but rather than having separate rounds, when one health bar is burnt, you start with the next health bar and the other fighter on whatever they were. I do prefer this kind of fighting style as it usually means the best fighter in that round wins, rather than somebody getting a bit lucky.

Decent enough Vs screen this time round.

No, it really does look this bad

The stages do actually look pretty good, though there are a number of camera issues especially on CJ Combo’s stage. On this level the camera is forced to pan and tilt due to environmental items. It means the 2D character models start to warp as they are distorted by the new camera angle.

Other stages are very strange in their size too. Spinal’s stage, while admitedly looks cool as fuck is about 7 characters wide it means fighting becomes unnecessarily cramped.

The soundtrack is still pretty …killer… (sorry), thumping bass and everything you came to like about the original’s soundtrack. There is however some odd ass lyrics added. Orchid’s theme is Sonic Adventure levels of awful vocals. Oh and Sabrewulf’s music is a little bit inspired by the Imperial March.

So as mentioned the fighting is based on a pretty robust combo system. It means fighting is fast and fluid, and while it is let down by the awkwardness of the Nintendo 64 pad works as well as it can within the confines of said pad.

Gone are the unnecessary Fatalities, this might upset some people, but Killer Instinct Gold is a solid enough Fighter to not need to rip off Mortal Kombat. 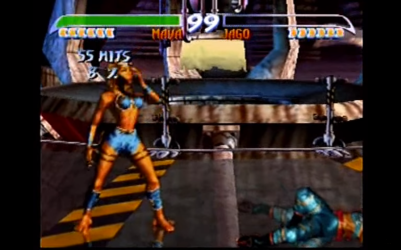 This is where the game starts to fall apart for me.

Glacius seems stupidly overpowered and absolutely rapes me no matter which character I am. Regardless of difficulty setting he either stands far away and spams protectiles, or he does a teleport uppercut when you get near. He feels very broken to fight against, and while beatable, he feels a little like an awkward Mortal Kombat sub-boss in terms of bullshit design. 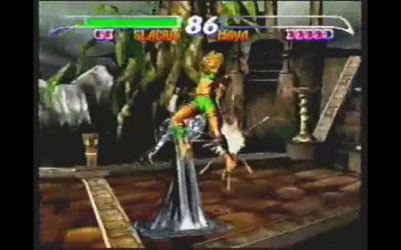 Gargos, the final boss is the biggest pile of wank that ever existed. The ONLY way to win is to get him to 0% and then do a move that knocks him in the air. If you’re good at the this won’t be a problem, but if you’re like most people and starting off on Easy it is next to impossible. You don’t know all the moves, and the few you do he’ll just block or in my case combo breaker the only time I was about to perform the uppercut combo.

To top this off he has a really cheap taunt move that gives him life back which he performs EVERY time he knocks you down. So have fun with that.

For me the single player is totally ruined by a stupid fucking gimmick that is not required. Have a hard final boss, fine. Having a hardish boss that can only be killed with a gimmick is fucking retarded.

Pros will enjoy the game, as the fighting is fast, and it is as fluid as a Nintendo 64 game can be. The rest of us will be frustrated by odd difficulty spikes in Glacius, and then a wank ass gimmick on the final boss.

It makes scoring difficult, as two player is fun, regular fighting is fun, but the sudden difficulty is bullshit.

Cons: The music, being on the N64, stupid ass bullshit gimmick to kill the boss

Add 25% if you’re awesome at Tournament Fighters and don’t hate wank ass gimmicks thrown in as a curveball.

Scores were all over the palce for Killer Instinct Gold, is scored 60% all the way up to low 90s. The detailed backgrounds and controls were praised, but the blurry models critised so too the “archaic combo system”.