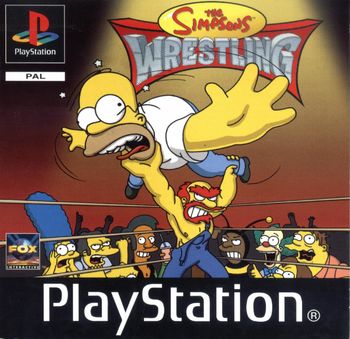 Aye carumba, why do I do this to myself?

Seriously, what the fuck is going on? Beyond the general terribleness I am flummoxed why I played this long enough to form an opinion.

Well technically this is a wrestling game, but you can pin your opponent while they are lying on their stomach, it is best of three rounds, and you do the counting. It means Simpsons Wrestling is an awful cross between Tournament Fighter and “Wrestling”.

I say “Wrestling” because all you do is mindlessly mash button(s).

As rosters go, it is weird but understandable, as the core Simpson family are there, plus famous Sprindfieldians, and Bumblebee Man. 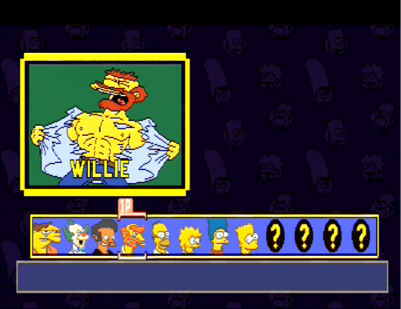 Each character has different abilities, which isn’t surprising, but the moveset is limited. Square is a weak attack that uses the least stamina. Triangle is a slightly harder move that uses a chunk of stamina, and then Circle acts as a semi-special attack that murders your stamina. But basically all you do is spam Square. There is a grab move using the shouklderpads, which then l;ets you do a semi special, which is really just a regular wrestling move.

You can pick up power-ups that occasionally appear in the ring, and these vary between useless (small stamina refill) and very useful  (full heal), as well as some letters towards your T-A-U-N-T meter (makes you invulnerable, not a special). Your AI opponent will either chase these like a man possessed, or completely ignore them.

I’ll be honest, I can’t fault the Roster in terms of the ones selected. Of the 20 characters that make the cut the only ones I personally wouldn’t have included are Bumblebee Man and Professor Frink, and Chief Wiggum being missing is a frankly travesty. But the roster is ok.

However, the roster makes Sonic the Fighters looked balanced. Ned gets 2 life bars per round making him unbeatable. Willie/Barney/Moe hit like a freight train, Bart and Lisa are super fast but weak. And then everybody else is in the middle, bar the special characters. 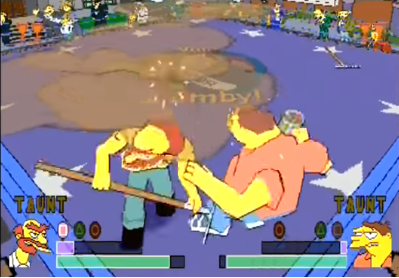 No, it really does look this bad

Some characters like Marge have a longer reach, but since you can jump the distance of the ring and pogo on opponents heads the reach distance is meaningless.

It means heavy hitter is really the only way to go as the rest offer nothing special, and you want the game to end quicker.

I would have loved boss characters like Hank Scorpio or Kong-Homer from Treehouse of Horror, but instead you get Smithers, with Mr Burns throwing shit in the ring. It is lame and isn’t really a boss. If they had included some off-piste characters it would have enabled some boss creativity. But as it is, a lack of boss fights gives you no impetus to carry on beyond the first few stages. 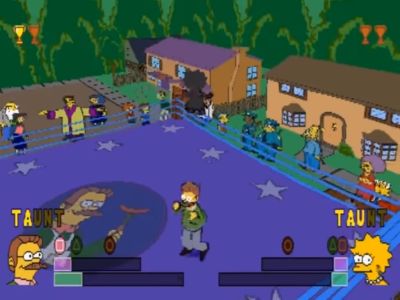 All characters are voiced by the voices from the show, so some effort has gone in on that part. Pre or post fight taunts are specially created for the game and can be unique to the matchup, but some are out of context quotes ripped from the series which is a nice touch, but can be tonally jarring and sadly this is probably the best aspect of the game.

Jebus the career mode goes on forever. I got bored and turned off after 10 fights as that is only 30% of the career. It means single player drags like a bastard, rounds can take a few minutes depending on how still the AI stands, but it means 10 fights can easily take 45-60 minutes and since all fights are won with you mashing square this isn’t an hour well spent. 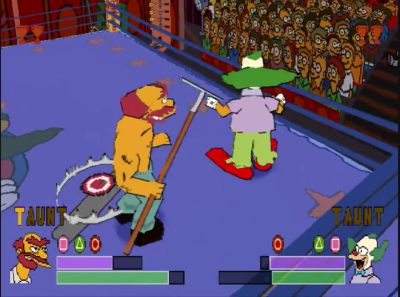 You start off on the New Challenger Circuit, this is basically easy mode. When you beat it you move onto the “Defender Circuit“, which is pretty much the same, and finally the “Champion Circuit“. The difficulty scales slightly, but the AI is atrocious in all three modes and the only reason to persist with this is to unlock characters.

Once you beat the “careers” you can then have some special matches. These have weird special character matchups like Itchy and Scratchy, and Kang and Kodos and they are NOT worth the effort to unlock.

There is no getting around this, the game is a big bag of wank but still better than Sonic Adventure.

Pros: I honestly believe the Devs were fans of the series and tried their darndest (+5%) 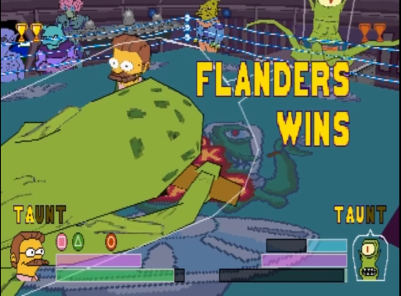 Great, now I can turn this off.