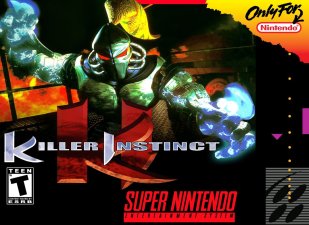 I suck at Tournament Fighters, there aren’t many I can beat and there are certainly even less that I am vaguely good at but at least I can beat Killer Instinct on easy though, so I’ve got that going for me.

Ultratech decides to hold a fighting contest between humans, and some monsters they have created. In the process of this, they create a dimension warp that somehow brings through a monster called Eyedol, who serves as a final boss (if you don’t play on easy).

Being a Tournament Fighter, you fight man-o-man against the bizarre Ultratech creations. Rather than having two “proper” rounds, you get two healthbars. Lose one, and you move onto the next one. Your enemy will be on the amount of health left before you recharged, so the winner of the fight is the best fighter. The winners are clear, and fair, just like in ClayFighter.

Similar to ClayFighter there are stupidly powerful combo moves, these entail you entering a 10+ button combination, which will pretty much destroy your opponent. They are awesome to see, but if you’re a hamfisted gimboid like me, you’ll never pull one off.

On top of this, is the Combo Breaker. If you or the enemy are in full flow combo, you can break the combo with a 5+ button combination. Basically, if you get good at this game you can be insanely good. If you suck, you can bluff your way until the final boss, but will be wafflestomped by somebody good. 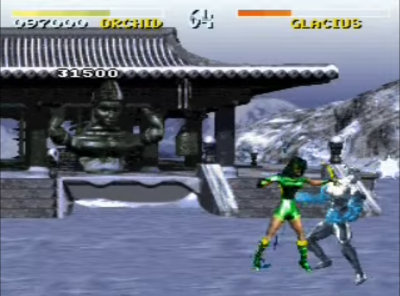 The game is actually ok with the difficulty, until you hit Eyedol. If you don’t know how to do combo breakers just turn the game off, or go into practice. I always complain about the Goro-Type in Mortal Kombat being an impenetrable wall, in Killer Instinct it is a little different. Eyedol doesn’t have a move for every situation that he’ll spam you with and with each successful attack landing 30% damage. Instead, he’ll just whomp you. He’ll bust into a massive combo, and again, if you don’t know the breaker, just put the pad down. You ain’t completing the game sonny.

The character selection screen is pretty poor, you have to cycle through, and can’t see them all at once.

Most character moves can be figured out, there is the usual projectile, closer tight moves like Street Fighter or Mortal Kombat, but these moves do very little damage. You NEED to learn the combos to do significant damage, or spam regular attacks. The special moves are pretty bonk, as a hard kick will do more damage than a fire ball.

On top of this there are “No Mercy” finishing moves, these kill your opponent, and thankfully, aren’t impossible to pull off. However, like Mortal Kombat knowing where to stand on screen is a bit of a pain.

Jesus, a hairy arse smeared in vaseline on a glass table looks better than this. Honestly, this is one of the worst looking games I have ever played if you ignore Bubsy 3D. The character models are fuzzy, unclear, and pretty poorly defined. The “CGI” versions on the “versus” screen are not much better, and on the tournament ladder it can be difficult to tell who is supposed to be who. There are many MANY bad things to say about Mortal Kombat, but it looks better than this. It is strange, as Rareware did use a similar technology to Donkey Kong Country, and that still looks sexy today.

Oh, and they framerate is fairly poor, the movement really can look like a PowerPoint presentation at times. It does remain consistent allowing for fluid fighting. but visually to look at, you get about 3 frames of animation.

You know what? I actually like Killer Instinct, I reckon there is enough depth for a pro, and versus humans I can at least string some cool moves together.

The movement is fast and fluid, and is fairly intuitive to pick up. My main issue is that you have to get *REALLY* good to beat the final boss, as until you know your combo breakers, it is impossible.

The visuals are frankly atrocious nowadays, but for the time they were”super realistic”…

There are better Tournament Fighters out there, but if you want a fun bash with mates Killer Instinct is a good place to start for noobs. Unless your opponents are good. If you play someone good, and you’re not, you’re going to have your face smooshed.

Pros: Easy to pick up, Came on a black cartridge so it is easy to spot on your shelf.

Critically acclaimed and declared by the press to be better than Mortal Kombat 3 (not hard), and criticised for not being quite on a par with the arcade version, the SNES home release would go onto scoring 75s-90.