My name is Jamie, and I have never actually beaten a Mortal Kombat game. I’ve played most, but of the ones we have featured so far MK1, MK2, MK3, MKM:SZ, and SM, we have either given up because they are TERRIBLE (Mythologies), or hit the Goro-like wall that we can’t beat even on the easiest settings.

With that, I thought I would see if there is a Mortal Kombat game I can beat, and with people complaining this is an easy one I though, “I suck at fighters, so I’ll try the easy one!” and dove right on in.

Something about realms and a fighting tournament to win Earth. Some people eat this shit up, but you can play the game and not know the story or see any mention of it.

Mortal Kombat 4 is obviously a Tournament Fighter, this means you battle one-on-one in fisticuffs, with somebody who wants to kill you.

In a surprise twist, the combat is fluid, and even me, with my slow old man thumps, am able to string together relatively decent combos. Moves are easy and intuitive to learn, and I was able to play as most characters and figure out some of their moves. It meant I was able to quickly learn the game, and while initially I was being whomped on medium, after a brief foray into VERY EASY I was able to start ratcheting up the difficulty.

Ok, I can beat this game! And I can probably see why the more hardcore fan might have an issue with the difficulty, after learning a few characters in VERY EASY, I was able to start beating Normal after about an hour of practice. I was even able to get Flawless Victories on Goro.

One of the problems though is that the movelist is very cheeseable. If you’re Raiden, you can endlessly spam the flying attack. The AI is pretty dumb, so doesn’t bother to block. With Kai, I’d do his flying jump over Goro, and then use the slide kick move. Sub Zero i’d just jump kick Goro, and Liu Kang I’d spam flying High Kick.

It meant I could cheese Goro, but the rest of the game I’d play properly, learning moves and using counters/block/dodge.

Shinnok, whoever he is, was too easy. I don’t know if the last boss is usually easier on a Mortal Kombat as I have never beaten a Sub-Boss Gorotype. But I got to him with 6 different characters, and didn’t drop a round against him. I didn’t move on to harder difficulties, but on normal and easy it was too easy.

I sucked most versus Tanya

I’ve complained about it before in Mortal Kombat, but in MK4 they have fucked with the roster again. However, I actually like what they have done. The have removed the terrible robot pallatte swaps, and the female ninjas. While I liked Kitana, the other 2 don’t add anything.

The new additions are alright, they attempt to add to the story, but they are straight replacements for others in the series.

What we have is:

Fujin, a Raiden Clone.
Kai, Liu Kang pallette swap.
Quan Chi, who was apparently in Mythologies but we didn’t get far enough or notice him… Is basically Shang Tsung.
Tanya, a fast chick. Replaces the female ninjas.

Jax, Johnny Cage, Liu Kang, Raiden, Green Sub Zero, Yellow Sub Zero, Sonya and Sub-Zero all return, and are the same as before.

Overall, while the new characters are almost direct replacements, the style, and design makes them a little more interesting to fight and not a bloody Indian Cheif Shaman… 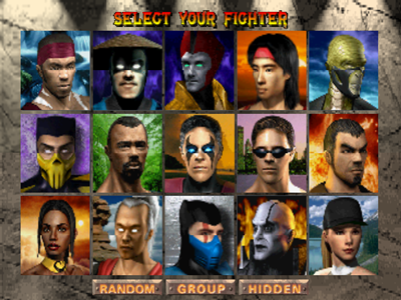 I still can’t pull these off…

I played with almost all the characters, beat it with 6, and I was able to pull off about 4. This was with an internet guide next to me listing all the moves, they are all a bit too fiddly. While I don’t want one button fatalities, you don’t need a 6 button combination for them, especially on the god awful N64 pad.

The ones I did were fun enough to watch, but unless you’re good, don’t expect to see many of them.

About the only one I can pull off

I actually enjoyed playing MK4, the N64 pad is atrocious for it, and takes getting used to, but for the first time in a MK game the combat was fast and fluid.

The step up to 3d affects some things, in that it looks like a hairy arse on a glass table smeared in vaseline, but I can honestly forgive it for that, when the combat is as fluid as it is.

Ultimately, it isn’t better than Tekken 1, and while not as stupidly fun as ClayFighter 63 1/3, Mk4 manages to charm me enough to not hate it.

If you’re a glutton for punishment, and like a frustratingly hard tournament fighter, this probably isn’t for you. If you’re a casual who likes to throw endless ice blasts then MK4 is one of the Fighters for you.

I completed the game 6 times in an hour, and if you want to dedicate hours and hours you might find some depth here. But maybe keep it as a game to play when drunk with your mates.

Pros: I can beat it. fast paced. attempts at voice acting for epilogues.

Cons: Will probably be too easy for the hardcore fan, the voice acting.

MK4 was criticied for not being as entertaining as the previous entries, it was praised for improved gameplay. Across almost all platforms it achieved 75% scores.