It wasn’t until much later, when the Super Mario Allstars collection on the SNES was released that we finally got to experience this game. So with that in mind, I am playing the SNES version because it has save states, and unlimited continues!

The Lost Levels is a platformer, you run left to right and jump over, or on things. Simple.

However, The Lost Levels is bloody difficult. It is kind of like Super Meat Boy in many respects. You may want to stop, assess the next jump, and go for it. But actually, the best and often only way to beat a level is twitch reflexes and speed. From world 5-3 where the game starts to get more difficult, you have to start “just going for it“. So many of the jumps are designed around your momentum, that if you stop to smell the roses you won’t be able to make the next jump. Also, some jumps depend on the clock cycle of an enemies movement, and it is often easier to just run passed the fuckers before they start an insane routine.

Hammer Bros in particular are a pain, and often the only way to pass one is to run and pass them before they start throwing. Some jumps require you to jump on an enemy to make the distance, and again, some of these require you to “JUST GO FOR IT“, slow down and wait, and often the enemy pattern doesn’t realign correctly for you.

This level can suck a dick

While I am nowhere near good enough to speedrun The Lost Levels, I can see how it is done. Some levels I had to do 40 times before I beat them, and by the time you are able to beat a level, you are twitch reflexing to get to the end. So while bloody difficult, Lost Levels is satisfying, and fun

Oh yeah, and warp zones are not always your friend…  I found out the hard way, after 50ish attempts at level 8-1, I accidentally went down a pipe near the flag, and… It took me to World 5-1… Basically, don’t use pipes! Or learn the game… Most pipes are evil, and are not to be trusted.

The 16bit version is obviously twice as bitty. and looks a lot nicer.

The game can be played as either Mario, or Luigi, and this is the first game to make a difference between the two.

Mario is easier to control, but has a poorer jump. He is also susceptible to momentum, meaning if you stop, you might not be able to proceed.

Luigi, is a slippery little BASTARD, but he jumps higher so he takes a lot of getting used to. Luigi also has the bonus of being able to gain momentum while jumping . It means that while he is harder to use initially, Luigi is the better of the two brothers. He isn’t the complete waste of space I find him to be in the *OTHER* Super Mario 2. 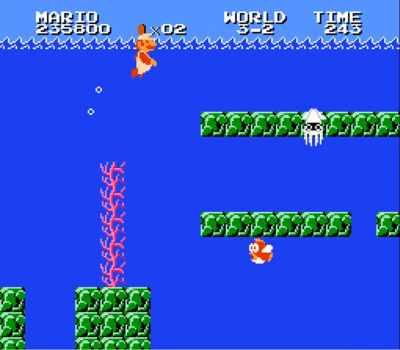 I still love the music to the underwater levels.

There isn’t really much else to say, it is Super Mario Bros again. But much MUCH harder and better.

The difficulty is fair, and while it can be frustrating learning some of the jumps I’d put it on a par with Zelda 2, as one of the most satisfying games to beat.

The added difficulty, and the different abilities of Mario and Luigi means that there is more of a reason to replay the Lost Levels which ultimetly make it a better game than SMB1 and the *other* SMB2. But unless you GIT GUD, maybe stick to the SNES version with save states and unlimited continues.

Pros: Harder than your dad in a Thai massage parlour

Cons: Like a Thai massage parlour, there are some unexpected surprises

I don’t speak Japanese, so I don’t know what people thought back in the day. But it scored fairly solidly with 8/10 on the Virtual Console re-releases on the Wii and WiiU.