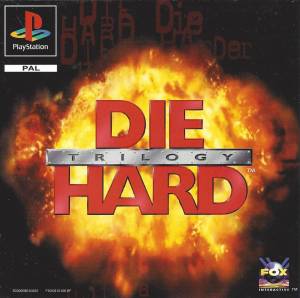 This might actually be the first game request I ever got, and that was literally 3 years ago, so that is how incompetent I can be with requests!

Anyway, Die Hard Trilogy was a pretty epic game back in the day, you got 3 totally different styles of game on one disc and since all the games are totally different I will score each game individually, and then score the “collection” as a whole.

Die Hard is a third person shooter, Run and Gun. You control John McClane as he navigates all “20” levels of the Nakatomi Towers where you have to eliminate all the terrorists, and rescue as many hostages as you can.

Once the terrorists are dead, you need to find the exit (the bomb) within a time limit that appears at the end of the level. Failure to do so will result in gameover, and a VERY angry you. 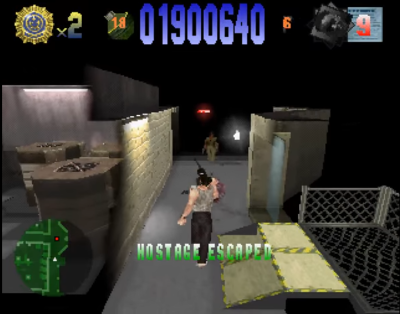 Extra lives are gained through rescuing “Purple” hostages, these are timed events, where the hostage will be executed if you don’t make it in time. They are fairly rare, but if you spot one, you better get moving as you usually get less than 10 seconds to save them.

It is all very simple, and while the graphics are atrocious to modern eyes you will have a decent time playing Die Hard.

It isn’t the hardest of games since the AI is almost non-existent, as you can stand in a spot and wait for almost all enemies to walk passed you on their patrol, or they line up one by one to be shot. 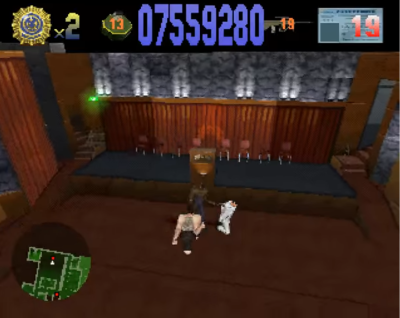 You’ll have to trust me on this, but these guys are normally purple on the minimap!

There is a decent level of detail with regards to Nakatomi Towers, and while there are only 20 levels instead of 35, you don’t feel cheated… The Executive Floors look like the area that Mr Takagi is killed, the Vault looks like the vault, and so does the Ballroom/party floor. Well, as much as a PS1 era game can.

Overall if I compare this to other Run and Guns of the era, it is actually fairly solid, the shooting is rudimentary and the AI is thick as fuck, but Die Hard 1 is enjoyable enough and you’ll understand what is going on very quickly.

Die Hard 2 was my favourite as a kid.

The games events take place in and around Dulles Airport, you go around On-Rails and shoot things following the storyline of the film relatively closely.

As a shooter it is a little lacking though. The shots have a slight delay that you’ll notice fairly quickly, and the shooting feels slightly inaccurate. This was common for the Predator Light Gun era on PS1, but a better game like Area 51 got around this. It isn’t wank and broken like Lethal Enforcers, but the shooting isn’t as good as I would like.

The game also varies widly between being very easy and frustratingly hard. Some sections have endless instahits where unless you’re spamming explosives you’ll die, but this is remedied by almost endless health respawns. It is very frustrating when you get gameover on instadeath sections, but if you make it through, you’ll have your health back in almost seconds.

One bugbare is that it isn’t really obvious who is hitting you, and that you have been hit. The screen does a weird ripple effect when you’re damaged, but this should have been the standard BIG ASS BULLET HOLE like in every Light Gun Game. 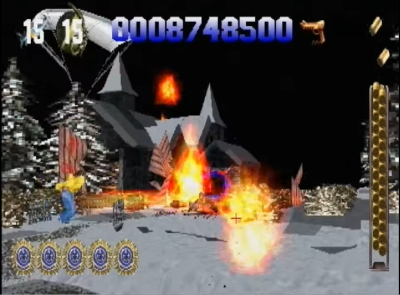 No, I don’t know what is going on here either.

My biggest issue with Die Hard 2 though, is the length of the levels. Holy fuck these are long for a light gun game! Some are 10 minutes long, and since there are 8 levels, the game is about an hour long. Normally I complain that light gun games are short, and average about 30 minutes, well I can see why now. 10 minutes for a level is too long, and you get serious cramp aiming a gun for that long. So they either needed more levels to break up the game more, or shorter levels.

Overall though, as a Light Gun Games go Die Hard 2 is fun enough, if a little broken.

Die Hard with a Vengeance

Die Hard 3 is basically a checkpoint racer. You have to drive from point to point in a set time, and hit the checkpoints (bombs). Fail, and you lose a life, make it, and you need to go for the next bomb.

Occasionally, you’ll have to chase a bomb car. These are cars that move around the city in a set pattern, and you need to ram it a number of times to destroy the car. The cars follow a easy to spot pattern, and the main annoyance comes from either the terrible collision detection or frustratingly short timers.

Bomb Cars can only be damaged from a collision from behind, if you drive head on, you’ll do no damage, and also, there is a long delay between you being allowed to hit the car again. This doesn’t always happen, but sometimes the car seems invulnerable for 5 seconds, other times, not. 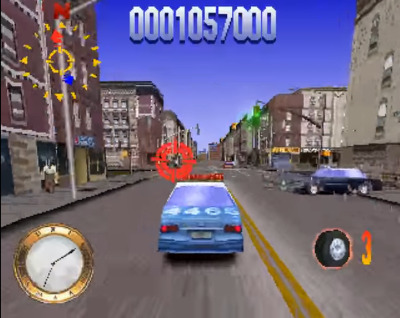 Seriously, it is a checkpoint racer

Other than that… Not much is going on. There are 10 levels, with a bonus level at the end of each level in the subway, wherr you have a pointless drag race that I couldn’t seem to lose.

This was my least favourite mode as a child, and I can still see why. The cars control terribly, if you press the handbrake you do a 180degree spin, and some checkpoints are next to impossible to get to. I ended up cheating, and using the infinite boost cheat from level 8 onwards as there wasn’t enough time to drive from A-B without endless spamming of boost. So it was very frustrating. 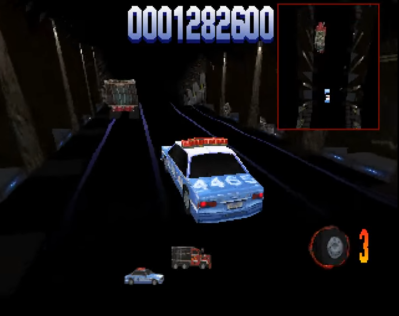 These bits are utterly pointless and have worse rubber banding than Mario Kart.

I don’t really have a racing game to compare this too, I guess the closest would be the Driver series.

So interestingly Fox Interactive didn’t buy the rights to the soundtrack or the actors. So what you get is some terrible attempts at Bruce Willis, and special mention goes to whoever is attempting Samuel L. Jackson’s voice, as it sounds like a white dude being asked to do his best black voice. The quotes are also incorrect, which is amusing.

The music is absolutely terrible too, think awful videogame trance music. It is mindlessly repetitive, and has a short loop. It is bad to thr point of muting, but then you’d the comical misquoting.

All the games can be glitchy too, Die Hard 1 will have men clipping in doors, who then get stuck.

Grenades wont go through an open door or smashed window which is vexing, and the collision detection is pretty shonkey in all 3, though it is worst in Die Hard 3.

Some lampposts are objects, most aren’t, same with trees. It means you don’t know what you can hit, and what to avoid.

None of the games are particularly outstanding at what they do, and you’ll find better examples of any individual game, but as a collection Die Hard Trilogy is pretty spot on. Die Hard 3 is easily the worst, has the least depth and is most broken.

Die Hard 2 is decent enough but gets boring quickly. But I was honestly surprised at how well Die Hard 1 held up, though all 3 look like ass.

Pros: a lot of bang for your buck.

Cons: Jesus it is ugly

Reviewers remarked at how good value it was to get 3 games for the price of one, and scoring usually in the mid 80s. Though people did remark on the glitches…