I didn’t really like Final Fight on the SNES, it was too hard, lacked multiplayer,and suffered weird censorship issues. It also felt a little hollow when compared to Streets of Rage or Streets of Rage 2.

With Final Fight 2 we have a two player option and some new characters, and less pointless censorship. So does that make Final Fight 2 better than the first one, and where does it rank amongst it’s peers?

Cody takes a holiday, and Guy goes off training leaving Haggar to do Mayor-ey things back in Metro City. To get revenge, the Mad City Gang kidnap Guy’s fiance (Rena) and Guy’s sensai, Genryusai.

Maki Genryusai, Guy’s younger sister (and presumably Guy’s sensai’s daughter based on surname…) rings up Haggar and tells him of the shenanigans. Rather than cutting his holiday short, Cody doesn’t turn up. And Guy is off pottering. It means Maki teams up with Haggar, as well as a random tag-along called Carlos Miyamoto. You then follow the oddly placed breadcrumbs before a final showdown with Retu, the Mad Street Gang’s new leader, in Japan.

Basically, it is the same story as Streets of Rage 2. And it makes very little sense that Guy isn’t in the game, since the story ONLY affects him. 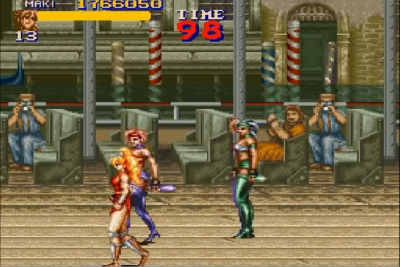 The Japanese versions lets you whomp women. Also, that women in the background is really enjoyiung this girl on girl.

Final Fight 2 is a side-scrolling Beat ’em Up, so you walk left to right, and punch things. There is a lack of move variety, as you can only punch, jump, and jump kick.

You get a special move, but like Streets of Rage 2, it drains your health if you use it. It means there isn’t much variety to combat bar some minor differences between the characters.

Around stage 3, Final Fight 2 starts to suffer from Golden Axe 2 syndrome, in that it runs out of ideas and just throws the same men at you but with more health, so monotony sets in.

And they are starting to get stupid health on level 3.

Each character plays slightly differently, but in practuce it ends up being the same.

That’s it really, other than your range; Haggar has HUGE range and Maki has the range of a gnat, while Carlos is in the middle.

The game suffered from Nintendo censorship, so all the women have been swapped to men, so you’re not allowed to whomp women and it means there is a lack of variety in enemy types. The women have been reskinned, but they have been skinned to a model that looks and behaves similar to another enemy type, so you can realistically confuse the knife men with men with poles. 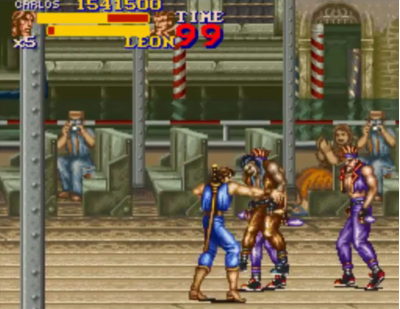 I completed the game first time only using 2 continues in under an hour. So it is much easier than the Streets of Rage games, and isn’t anywhere near as fun as Turtles in Time or Hyperstone Heist and it lacks the finesse of Batman Returns.

While the game is about 50 minutes long there are only 6 levels. It means the levels are all quite long, but they don’t really change much and your frequently having to burn down 2-3 men with high health for ages.

It means Final Fight 2 just isn’t very fun and is mostly uninspired, with sections that seem to drag on forever. The lack of real difference between the playable characters means that there is no reason to play again.

Play other Beat ’em ups, it isn’t bad, it is just boring.