WCW/NWO Revenge – also known as a game where you can actually play as Horace Hogan. The dream is real, people.

Back in the mid-90’s, WCW head honcho Eric Bischoff (present here in all his leather jacket, karate kicking male model glory) had the then revolutionary idea to have a group of former WWF wrestler pose as the NWO, an invading force intent on destroying WCW. And by jove, it worked.

WCW trounced the WWF in the ratings for years until everyone realised that all of these wrestlers were turning 50 and that there was no point in watching the product if they were never going to receive any comeuppance. Well, Hogan got some a couple of years ago, but we’d best not mention that.

The point is, the idea gathered so much steam that the NWO was able to pose as a legitimate opposition to WCW, and as such WCW/NWO Revenge was born IN NAME ONLY, because there’s no real faction warfare in this game. Top stuff!

Anyone familiar with the AKI/THQ graps games should know what to expect here – woeful pixellated cardboard cutouts in the crowd, wrestlers with the same determined grimace on their faces no matter the scenario, and some muppet pratting about on a Casio keyboard on loop for 37 hours. It all looks fine, and still moves smoothly enough; but the lack of licensed music for each grappler worked against WCW/NWO Revenge.

This right here is why everyone loves Chris Jericho.

Terrible though they were, the WWF games by Acclaim had unique music and entrances for each wrestler, making this seem like an incomplete presentation to many fans. There’s no commentary either, but literally nobody ever has been mad that a wrestling game didn’t have commentary; as it’s literally never been good.

So this is a funny one. WCW/NWO Revenge, in essence, is the same engine as WWF No Mercy – the single greatest wrestling game of all time. So, great, right? Eh. Kind of.

Revenge suffers from a similar problem that plagues Fahrenheit – it’s formula has been bested by it’s own developer in later games. As a result, Revenge feels somewhat like the beta test for the final product of No Mercy. It still works very well at it’s core, and is still a really fun multiplayer experience. There’s just a lot of little touches missing.

Mechanically, there’s a couple of niggles with Revenge, namely the lack of proper finishing moves for a lot of wrestlers. THQ hadn’t yet added the ability to activate a finisher from different positions, meaning you had front, back and corner finishers. Not game breaking in any sense, but annoying for fans who want to whomp somebody with a Macho Man elbow drop, only to find out you can bust out that move at any point; and it has all the impact of hitting a bear with a bag of marshmallows.

Actual footage of Ravens devastating top rope move (he just does this. HE DOESN’T EVEN TRY).

There’s also some breaks in the fluidity found in Revenge, and transitioning between moves can often be needlessly clunky. While not terrible by any sense, some characters have a strange grapple move that locks them into committing a series of strikes on the opponent. It’s alright, but it breaks up the action and becomes a bit monotonous when you keep forgetting that it’s a thing that can happen and accidentally end up doing it 4 times in a match.

The lack of a decent single player mode hurts Revenge somewhat as well, with the only option present being a series of tournaments for each different title. You just grind out one match after the other until you win the belt and unlock the title holder(s) at the end. Once you’ve done all five, you’ve nailed it 100%. Wet fart. There’s also no creation suite, just the ability to alter the attires of existing wrestlers by colour. We can all agree that Dean Malenko should’ve always worn hot pink, but it still doesn’t scratch the itch. 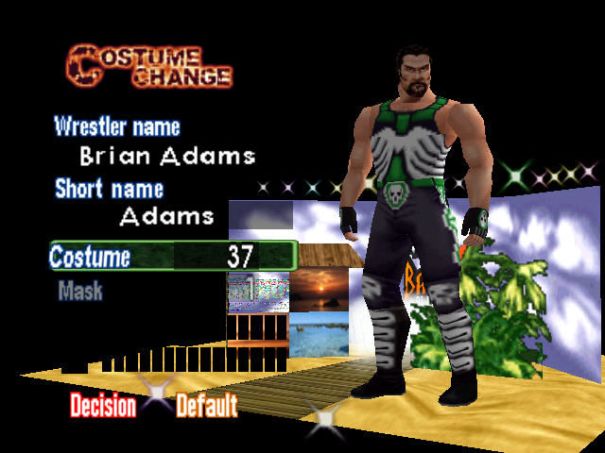 It’s not all doom and gloom though. Revenge actually feels faster than NM, making the multiplayer feel fun and more chaotic. The roster is fantastic as well, with over 50 wrestlers represented, including quality wrestlers like Chris Jericho, Mr Perfect, Yuji Nagata and Glacier. What? Glacier ruled, get over it.

So WCW/NWO Revenge is still really fun, fast, and multiplayer dynamite. It’s only let-downs are the fact that it’s been bettered by it’s sequels, in all honesty. And if you were a fan of WCW, you should still dive right in. Deck out Perry Saturn in gold and purple and beat the hell out of mauve Sting. Just like it really happened.

Cons : There’s next to nothing for the solo player, occasionally clunky, lack of licensed music, creation options and match types.

Revenge was highly regarded way back when, often being touted as superior to it’s WWF gaming counterparts (true), though being maligned for not having as many creation options (also true).