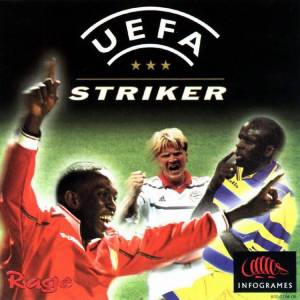 UEFA Striker is a sportsball game, so you kick a spherical object from Point A to Point B, attempting in put the aforementioned spherical object into a rectangular area with some sort of netting around it. The winner of the sports is the person to “score” the most trys, and therefore win the sport.

There are no official teams, so expect the Pro Evolution team renaming convention with names such as Glasgow Greens, Manchester, Rossi de Milano and such like.

However, the player names seem to be correct. I am no expert on all 30ish teams featured, but from my memory, the lineups are fairly accurate and certainly contain the correct names for the players that I recognise of the era. So no Perl Gazcoin like in Sensible Soccer and real players like Gianfanco Zola, though I think some fake names are present.

Even the great Zola will miss from this distance.

UEFA Striker takes a break from the common norms of sports ball games by introducing what can only be described as “Mario Kart Rubber-Banding“, me and a mate played for about 6 hours, and had roughly 20 matches. In the first half of the season, EVERY match we would go 2-0 up in the first half, and then, we’d get butt fucked the second half. If we weren’t able to build up a big enough lead in the first half, we would lose.

The second half of the season, we didn’t win a single game. It was comedy how much the game was saying “you’re losing now“. We would have 10-15 shots the first half, and be unable to score. And the opposition were suddenly banging them in from 40 yards out.

In addition to this, some teams seemed to suffer from “Mario Kart Bowser Syndrome“, where the game says, “No, this guy is winning the league and there is nothing you can do about it“. So overall, playing the game vs the computer proved a chore.

We actually found that the worse you took the corner, the higher the probability you would score

We spent about 2 hours on Training, expecting that to unlock proper tournaments, but no. It is a tedious set of training levels that don’t actually tell you anything. Sure, it tells you to shoot from certain areas, or that you need to hit the nets in a specific quadrant of the goal, but the game doesn’t tell you how. The training levels don’t provide you with any tutorial, they throw you in the deep end and it simply frustrates you.

In summary. The controls are skittish, the button presses are delayed, and in two player co-op it is impossible to pass to your human team mate.

There is an element of realism at play, so you need to weight balls correctly, and you need to time runs etc, but there is little to no in-game assistance making it a bit of a chore to learn.

It is also one of “those” football games where if you are dribbling with the ball and change direction the ball will roll away from you. This might be called depth or realism but it makes a dull sportsball experience.

As it is, for us, UEFA Striker just isn’t very good, there are MUCH better football games out there.

The game isn’t broken, but it certainly wasn’t an enjoyable evening playing it. We were only able to play it for so long because we drank a litre of Jagermeister and 12 bottles of Budweiser between us.

Pros: I guess there is depth, cheesing the keepers in training mode

UEFA Striker holds a 7.9 rating on IGN, so it is well regarded by many.