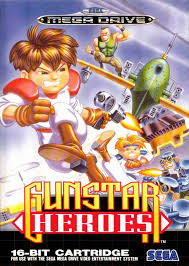 Gunstar Heroes – because sometimes, ‘fuck it, shoot the thing’ is all you really need.

Playing this in my formative days, I had no earthly clue there was a story; because – as I said before – ‘fuck it, shoot the thing’ was pretty much all I needed. And I’ll be honest, it’s further muddied by the fact that there are two different versions out there, a Western version and a Japanese version. Why? Shut up, that’s why!

I’ll stick to the Western plot, because I’m feeble minded and easily vexed.

You play as Red (and also Blue in co-op), who are part of the Gunstar dynasty, and in no way related to any sort of Pokemon. The Gunstars are in charge of protecting planet G-9 and have been for generations. One day, your older siblings Green and Yellow (heyyyy, wait a sec…) are kidnapped by the OUTSTANDINGLY NAMED ‘SMASH DAISAKU’ and, well, y’know…get them back. You lazy prick.

Also mind control, at some point. Just shoot the thing, haven’t you been listening? I feel like I was clear on this. 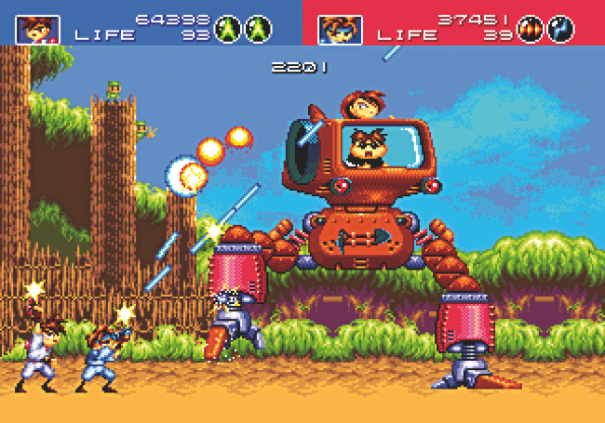 If this isn’t the most 16-bit thing you’ve ever seen, you’re lying.

In all sincerity, the music of Gunstar just never landed with me. It’s not bad by any stretch, just a shade forgettable. And there’s that much going on onscreen that you’ll barely notice it.

GH still looks great, it’s colourful, chaotic, and packs an astounding amount onto the screen considering it’s 16-bit limitations. It occasionally struggles in co-op, and can sometimes judder a bit, but never in a game breaking manner. And, man, it’s working super hard, so you can’t get too mad.

…I wont say it again, honest.

But yeah, GH is an absolute blast. Gameplay revolves around gunning down the dozens of enemies that swarm you at every opportunity, without silly limitations like ammo or reloading. Enemies will drop different powers that will drastically change the way that your gun works. This is a large amount of the fun of GH, as you can experiment with different weapons if you feel like you’re not being murder-y enough.

The bosses are plentiful and a lot of fun. Several mini-bosses will crop up in each level, each one incredibly unique looking and requiring different strategies to take them down. Couple this with a co-op mode and the option to choose the order in which you complete levels and GH becomes one of the most varied and customisable experiences of the 16-bit era.

HOWEVER (and I could be in the minority here), the board game level is 100 bags of different hairy mens asses. You shoot a large die, which rolls either one, two or three for you. Usually one. You then have to complete the task that you land on. Usually a boss. Who’s usually being a dick. And there’s very little in the way of health packs to help you out. It’s a fantastic idea, it really is, but the level of skill it requires of you is more than a little daunting. It’s not impossible, but it is pad-destroyingly vexing.

Gunstar Heroes is awesome. Was, is, will still be. The issues with a single level and some choppiness aside, it’s still fast, fun and frantic; offering a wealth of different ways to play in a way that many games today couldn’t compete with. FUCK IT, SHOOT THE FUCKING THING!

Cons : Bloody tough when it wants to be, occasional slowdown in co-op, board game level could’ve been executed better.

A smash hit back in 1993 due to it’s looks, speed and just pure fun gameplay. Gunstar is still considered a gem now, and is widely considered one of the best games of the 16 bit era.