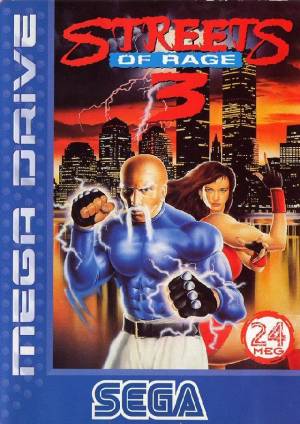 Streets of Rage is good, and Streets of Rage 2 is marginally better, and I am on a Megadrive kick at the moment, I thought I’d finish of this trilogy.

Is SoR3 any good?

There actually is a proper story going on here!

Not to be perturbed by having his face smashed in twice by Axel and Co, Mr X and his Crime Syndicate return once more! This time, Mr X has created his own robotics firm (RoboCy Corporation) that is making evil robots. Dr Zan, one of the people making the robots, realises Mr X’s evil plan, and contacts Blaze, she then teams up with Skate, Axel and Dr Zan to stop Mr X’s fiendish plot.

Cutscenes have been added to the game that tell you the story, and as a result things become much clearer as you progress through the game.

Unlike SoR1 and SoR2, SoR3 has multiple endings, though, it can be almost impossible to get some of these. 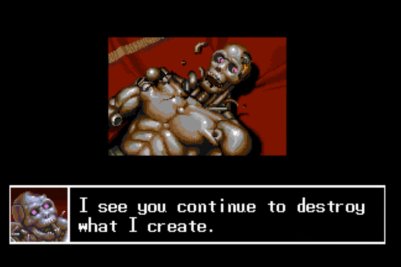 Come wiv me, iv you want to live…

SoR3 has tried to mix things up so it plays slightly differently to the first two games in the series. Gone is the timer, and also gone is the special attack that drains health (and the police cars from the first). Instead, you get a special that charges overtime, if you use it when it is fully charged you unleash a powerful attack, and don’t lose health. However, you can use it when it isn’t charged, at the loss of some life similar to SoR2. Using it in a bind is a good tactic, as it’ll break you out of an enemy attack, and if used correctly will mean you lose a lot less health. This adds a lot of versatility to your character, and a nice risk v reward mechanic if you like to spam the special attack.

You now gain extra damage moves that are a result of your power meter charging overtime based on your current points and length you’ve lived for. If you don’t die for a while, you are able to do seriously powerful moves, die, and you drop down a level. These moves are great, but once you hit level 6, and you’re dying thick and fast, you lose these abilities.

Again you get four playable characters, with a couple of secret ones, and each character plays differently; 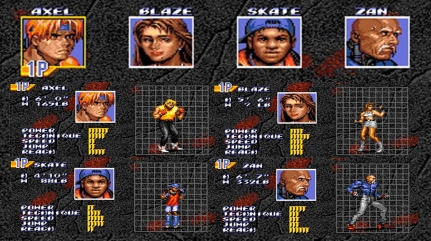 Jesus, Skate is a little bitch!

I couldn’t use Skate in 2, and I can’t use him here. I won’t say he is useless, I just can’t use the character. Zan replaces Max as the hulking hard dude, and thankfully they fixed the woeful range that Max suffers from. In SoR2 Max did a lame karate chop motion with a bent arm for a punch, here Zan uses his robotic arm to extend his range. It makes him VERY useful for closing gaps, or picking people off with a jab.

Surprisingly for a Megadrive Beat ’em up, there are only 7 levels. However, this is made up for by having two different Level 7s based on how you do in Level 6, and this affects for ending. 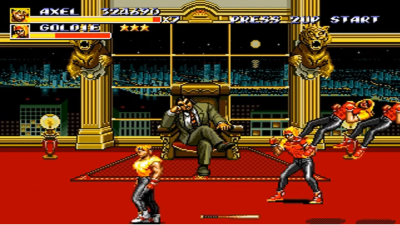 Other than that, SoR3 is a Beat ’em up, so you walk left to right on a pseudo 3d plane and punch things. Things are mixed up a little with the addition of a sort of minigame level with a JCB, as well as a branching path depending on how successful you are on the almost IMPOSSIBLE level 6.

SoR3 is too hard. If you play on easy, the game ends after level 5. If you play on medium difficulty I get gameover on the level 2 boss. You know the stupidly hard twins from SoR1? You get that again, but harder… What I have to do to beat the game is to play on medium, and use the 9 lives code to get me to the end, even then, I might have to use a level select code to start from level 6. Seriously, the game is hard.

There are loads of environmental hazards that’ll hurt you. If you’re too slow on Level 6 then you will get gassed, and can burn through all you lives in minutes if you get lost. The construction yard is designed to catch noobs out, and there are a lot of ledges you can get knocked off, meaning SoR3 needs a lot of practice runs, and patience, to know what you’re doing. 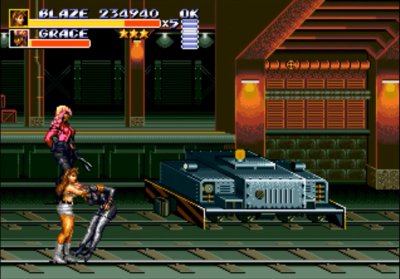 However, if you battle through all of this and get to level 7, then you’re confronted with standard men with 3-4 health bars. SoR3 does that boring attrition thing that Golden Axe II did, where it takes ages to kill everything on screen, it means that level 6 and 7 REALLY do drag. Added on top awkward enemy combinations, like women with long whips, and men with guns, mean you will struggle to close people down, and frustration can set in. I do sometimes have to cheat, and start level 6 on easy using the level select code, even then I struggle to beat the game at times.

There is no boss gauntlet, which is a bonus, but like Golden Axe 1 and Golden Axe 2, enemies with too much health manage to suck the life out of you. 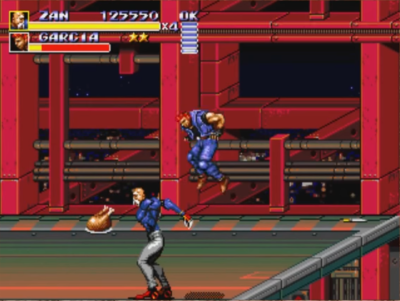 Zan nonchalantly tossing somebody off an elevator

Health pickups are still numerous, so mistakes can be recovered from. But in SoR3, you get less lives, you still get lives at increments of 50,000, the points just don’t add up quite as quickly as they did in the earlier games, meaning you can and will come unstuck if you’re not great at some levels.

If you are unfortunate to suffer from epilepsy, avoid this game like the plague. The second level is flashing lights hell, there is a disco scene, and they used strobe lighting for the game. It gives me a headache, andmakes me nauseous. 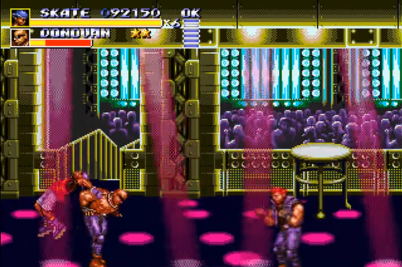 Oh god I hate this level

SoR3 is an odd one, it adds a lot like the branching paths, the extra moves, an improved special, and the cutscenes. All these serve to make a better more immersive game.

The problem, is that it is too freaking hard, and that stops the game being fun. The previous ones were tough, but always felt fair in the difficulty. Here you’re punished from the offset. It isn’t unheard of for me to die on the first level on Easy. I can get to level 6/7 on SoR1 without dying.

Basically, to sum up. If you can’t beat SoR1 on the hardest difficulty, then you probably won’t be able to get very far in this game. The fighting is fairly solid though, so if you like a challenge SoR3 is well worth checking out.

If insanely unfair difficulty is your bag, add 10-15% to this score. At about 80-90 minutes to beat the game is around the same length as SoR2, though you do get one less level in this game, so the levels are all a little bit longer.

You will probably need to sink at least 10 hours into this game to be able to beat it.

Cons: Hard as a frozen hard thing submerged in dark matter on a planet with too much gravity, Skate is in it.