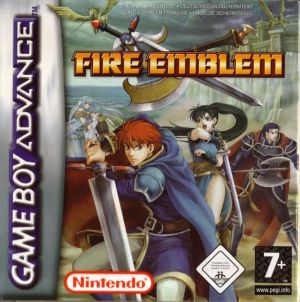 Also know as “Fire Emblem 2003” (US release date) and Fire Emblem: The Blazing Blade to help it stand out in a series that at this point had 6 games in the series. It was the first game in the series to get a Western Localisation and is a prequel to The Binding Blade, the 6th in the series.

There are many games that I have played in my time that have made me angry, but none that have made me quite as apocalyptic with rage as Fire Emblem. Fallout 2 made me rage by a stupid difficulty spike at the end, and the shear RNGESUS of Football Manager made me smash more than a fair number of keyboards.

And with that, we have a game with awful RNGesus, a stupid difficulty wall that puts even Shaolin Monks and Fallout 2 to shame, yet somehow, manages to maintain a certain charm.

There were moments where I threw the Gameboy across the room, and it is probably a marvel that the console survived the experience.

All story elements are presented to you in cutscenes, so you don’t need to search the story out. It is a little passive, and I would have preferred a Final Fantasy or Shining Force style exploration element to open up the world a little. But… 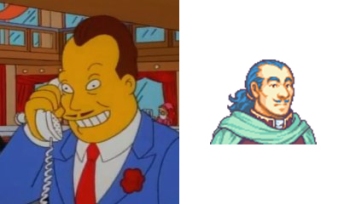 Yes, YEEES, I’ve had a strooooke.

Set on Elibe 20 years prior to The Blazing Blade, you take on the role of AssNugs, a master tactician who aids the protaganists on their journey. The story starts with Lyndis (Lyn) on the Sacean Plains, she discovers she is the long lost grandaughter of the Marquess of Caelin (Hausen). She sets out on a journey to rediscover her family, all the while the evil brother of The Marquess (Lundgren) is trying to usurp the throne.

The second Act of the story occurs one year after these events, and explore Eliwood’s search for his missing father, and the unexplained seemingly unconnected events across the Lycean League. The search will lead you to betrayals, evil wizards, and dragons, and it manages to do this without a stupid Final Fantasy VIII set of plot twists. The story is in depth, the character development is spot on, and there are a number of tear jerking moments. So I won’t add any spoilers. 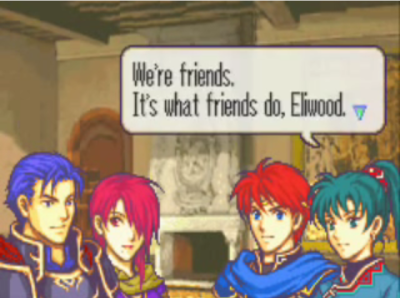 The story elements are presented in a nice Anime style cutscenes

Fire Emblem is a Tactical Role Playing Game, you take turns on a grid based system and try to kill all the opponents. Unlike Shining Force, all your team move when it is your turn, so you can plan your moves without risk of a cheesing and you can check the enemies possible moves by clicking on them. It means you can always plan one step ahead, and any cheesing tends to be your fault in the early parts of the game. 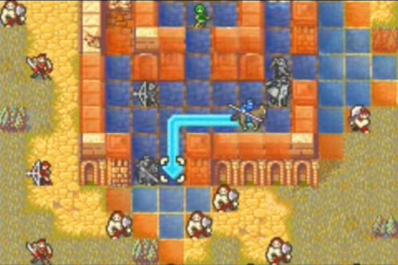 The maximum movement and attack range is clearly displayed

However, criticals are a pain. Lyn, Eliwood and Hector have to survive, problem is, the enemy have an unnatural fetish for singling out those three. On more than half a dozen occasions that toss bloke with a sword will suddenly critically hit Hector killing him instantly, and ignoring the weapon triangle.

Combat occurs on a Rock/Paper/Scissor mechanic, Sword beats Axe, Axe beats Lance, Lance beats Sword. It means that you need to plan the weapon you use to attack. In practice, this doesn’t really happen. If RNGesus says Eliwood is dying, Eliwood is dying. It is infuriating. I can handle a poor move, that results in a queue of 15 men attempting to kill you. What made my piss boil was the pussywillow with a hit chance of 5% criticalling your Lords with the wrong weapon resulting in a gameover 45 minutes into a battle.

I love Dorcas’ animation for attacking

Fire Emblem is hard, characters suffer permadeath, so lose somebody, and they ain’t coming back. When you’re learning the game, mistakes will be made, and you are punished. To get round this, you have a first chapter, as Lyn, where you basically learn the game.

The second Act of the game, is one year later, so all wounds are healed. It means those cheap losses early are countered, but at the same time, those characters are then woefully underlevelled. Florina, as an example, can become one of the most powerful units but she died first time she appeared in both Acts for me. Nils managed to die 3 times the toss little bard! It leaves you in a quandary, do you reload the level and try again, or plough on. Ploughing on feels like the right thing to do, but you will suddenly be punished on the final level if you don’t have the right party build.

It means Fire Emblem has the same issue as Jagged Alliance 2, you can effectively get gameover 10 hours before you actually get it, as you struggle to dig yourself out of that hole. 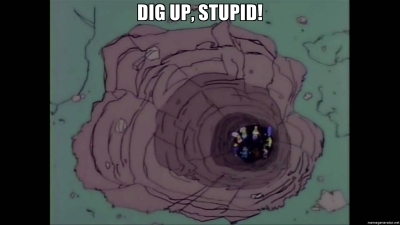 If you suffer too many losses you will struggle to complete certain levels, and can make some later sections almost impossible. 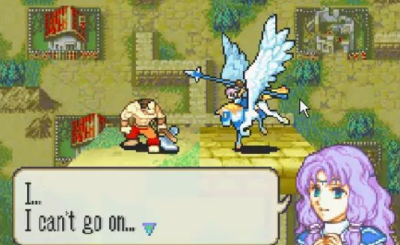 Florina dies quicker and easier than Mario on the Lost Levels

This is where the game length starts to become an issue. My “official” time is 21 hours to beat the game, but that doesn’t take into account the estimated 10 hours I spent trying to learn the 400 individual moves you have to make to beat the final level.

Other levels where your Lords are killed tended to happened towards the end of the level, meaning I then had to redo an entire level, so my overall time would be closer to 50 hours playtime.

The bullshit difficulty of the final level

The final level really is a chore, you start in the middle, and every turn a room unlocks, and some units and a miniboss come out. You have to think 2-3 turns a head here, because if you position your men to kill the archer boss, then the Barbarian or Mage bosses will come out and cheese you. You have to split your team up, and down the men as quickly as possible, because otherwise you will be overrun. It means you need to be maximising all troops movements and attacks on every single move. Make one wrong move here, and one person will be downed, likely requiring a reload. 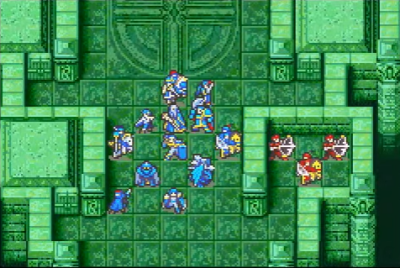 I hate this level!

Criticals and hit rates are a massive pain here too, you have to have perfect RNGesus to beat this, if Oswin misses on the archers then just reload. The Mage can critical Athos, which means another reload. The random enemy mage that can possess your troops from across the map, you better believe that it is a pain when Vaida suddenly makes a beeline for a Lord and somehow kills them despite you not letting her have a weapon. 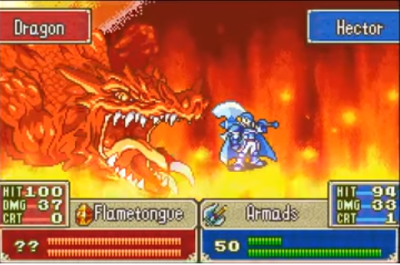 As much as I hate the Dragon, the animations for him are cool

And should you finally get through all of this, you then fight a Dragon, who will instakill pretty much all of your troops if they are not levelled enough. Or if RNGesus lets the Dragon have 2 hits instead of one, meaning certain death. Most troops can’t do damage to the Dragon as it has too high a defence, and only people with the “S” Level weapons can cause damage, well, if you don’t know the game to know all the secrets, 90% of these are completely missable. You get 4 or 5 on the final level meaning the final boss is *just* possible, but this requires a midlevel break to swap equipment and luck on the enemies turn. 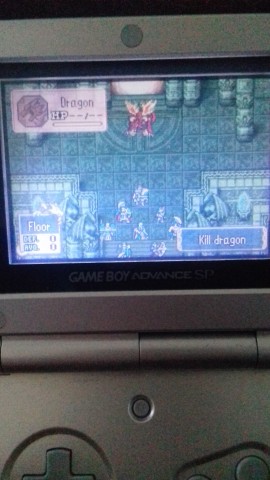 All members present and accounted for…

I got to the Dragon with all members intact when I finally beat it, Athos could do 36 damage a turn (Dragon has 250 hp) everyone else did less than 10, or where a Lord that would be instakilled. It mean I sent the Lords to chill in a corner, and sent the other 10 to their deaths. I could only beat the Dragon, by using everything I had to protect Athos, sacrificing Serra my healer for one heal. Renault to teleport Athos away, but resulting in Renault’s death. Pent, Louise, Dorcas were all sent to just stand next to the boss in the hope the Dragon would attack them instead of Athos. Again, this requires perfect RNGesus to smile favourably upon ye, and it took me 3 or 4 attempts to beat the boss using this method. Fire Emblem might be the only game where you can still lose when the boss has 1hp and you have 6 people left alive and it is YOUR turn. 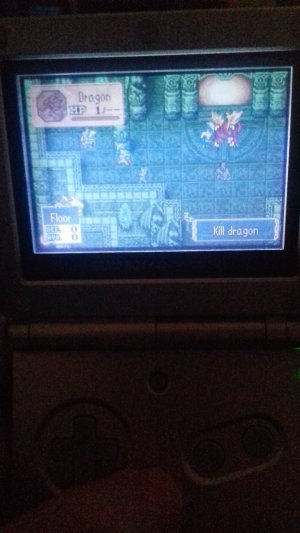 All I could think here was “How is Fire Emblem going to screw me”. Serra is asleep, Hawkeye and Hector have a move, Athos has moved. Eliwood and Lyn are unable to hit…

Fire Emblem is a decent enough game, but it is let down by the stupid difficulty spike at the end. Up until about Chapter 24 it is great fun and battles seem fair, but after Chapter 24 the game starts to drag. Battle become longer, and require a few playthroughs to figure out the curveballs. It means the game becomes an attrition test, as the battles never really change they simply add a brand new enemy type or a stupidly hard enemy typw. It meanz you aren’t trained or prepared for these curveballs, so when they appear it feels unfair.

The combat is easy and intuitive to learn, but again, is slightly ruined by an overly malevolent RNGesus. So the rules that are taught to you become meaningless, and hit rates and the weapon triangle are overrulled by the imbalanced and overpowered enemy units.

I love the story, I love the characters, Lyn is awesome, Hector is cool, and the tag alongs all add their own spin to things, meaning no two play throughs would be identical.

When you beat the game on Eliwood’s story, you can redo it as Hector, this is pretty much the same as Eliwood’s, but with some slight variations, and bonus missions. Once you have done that, you can play hardcore mode, which is the game, but harder… It isn’t anymore fun, but all the numbers on the enemies have been dialed up. The Dragon as an example now does 38-50 damage per hit, rather than a set 37. See MORE FUN! Personally I don’t see the need to do these missions, but you do get a lot of bang for your buck here.

Ultimately, what lets the game down is the insane difficulty, I like a challenge, but that challenge has to be fair. There are many times where Fire Emblem is neither fair nor fun (trying a level 10 times and wasting 10 hours of your life is a major downside), so overall the score is much lower than I had originally anticipated. Other than that, if you can overcome the difficulty you are met with a deep story, and meaningful character development.

Pros: Awesome characters, well told story, the battle mechanics are easy to learn (before the rule book is torn up)

Fire Emblem was met with almost universal praise and averaged low 90s scores. It currently holds a 88% on Metacritic.