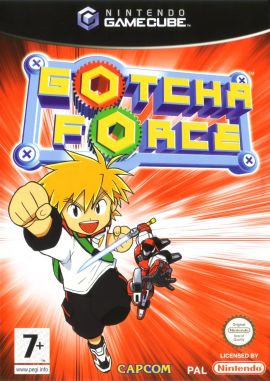 Yo, this be Reuben. You probably don’t know me, let’s face it, but I write for ol’ Stuff and That. That fact beside, I write for these chaps now as well, so hi.

You probably haven’t heard of Gotcha Force before, and that’s because it was a pretty random game, and went relatively unnoticed aside by some nutters with its mixed review scores and obnoxious shtick. Turns out, I was one of those nutters who noticed it, and played over 1000 hours of it back in the day. Recently, I’ve gone back to it, and I’m wondering if it’s really as good as I remember it.

It’s pretty simple, really. In a nutshell, some evil little robots called Death Borgs land on planet Earth and somehow cause damage to it, but it turns out there are other Gotcha Borgs wondering about and a kid called Kou finds the coolest one, G-Red, and forms the Gotcha Force to repel the Death Borgs and beat up the Galactic Emperor, who’s behind it all.

Go around that map.

Kou ain’t the only kid in on the act, though, because a bunch of litt’luns find their own Gotcha Borgs and fight either for or against the Galactic Emperor.

Really, it’s all nonsense, but for a youngun it’s nice and simple, and it can all be quite fun if you don’t take it too seriously.

Indeed, there are all manner of ridiculous attacks and weapons at players’ arsenals, so there is a whole lot of variety, at the very least. You might think there is a massive balancing issue seeing that there are hundreds of Gotcha Borgs and to balance them at all would be impossible. Even so, balancing isn’t necessarily right for such a mental game, it might even destroy the point of it all.

Let’s face it, all Gotcha Force is is stupid fun, but would we have it any other way? It’s gloriously in-your-face and all over the place, and that is what is great about it. Particularly with mates, it’s a bombardment of laughs and bright lights.

Nonetheless, there are some undeniable flaws. Firstly, the frame-rate drops can be horrific in multi-player, and at some points it is pretty much unplayable. Secondly, it might be great for the kids, but, at the end of the day, it is just mindlessly running around and pressing B or X to beat up other robots. I mean, there are charge-up moves and a massive variety in weapons and all that malarkey, but at the end of the day that is what it is, and it is restrictive, because it can become repetitive pretty quick — unless you’re drunk, that is (that gives me an idea!).

In the end, Gotcha Force is basic and graphically flawed, but it’s usually very fun in its ridiculousness and there is a unique variety on show — best enjoyed in short doses, mind.

I’m not surprised it passed so many people by, but, take it as it is and you can have loads of fun with it. It’s obnoxious, loud and sharp, and it’ll get on whoever isn’t playing it’s nerves like hell, but, particularly as a multi-player game, it can be a barrel of laughs. I wouldn’t bring it up in a conversation of the most well made games out there, because, really, it’s far from perfect — but it’s certainly unique.

Gotcha Force is a game like a 10-year-old boy, literally in-your-face and screaming at you. He’s not exactly an expert of anything and he can be really annoying, but he’s got an awesome imagination and an eye for fun.

Aside from gameplay, the soundtrack is the most blaring aspect of the game. It’s basically a constant techno-guitar solo, so it’s pretty obnoxious, but there’s nothing inherently wrong with it. In fact, it’s pretty catchy. It’s all like this, to give you a taste:

Next up’s the modes on offer, which consist of Story, Multi-Player and Challenge. You can guess what the first two are, you’re not morons. Otherwise, Challenge is essentially a bunch of challenges, of different difficulties, involving beating up Gotcha Borgs.

You may not think it, but there is no shortage of replayability in Gotcha Force. Sure, some people might not want it, but there is so much content on offer it hurts — literally, I’ve got a scar! At the very least, there’s the base Story mode, which takes 20 or so hours to complete. Oh, but it’s basically Star Fox, mate. Well, the story can be completed any number of times, and the more you complete it, the more Gotcha Borgs you unlock.

Collecting Gotcha Borgs is infectious. There are literally hundreds of the things, alongside colour variations, to boot. It’s like, Pokémon likes to say, Gotta Catch ‘Em All!, but who really does that? Gotcha Force is so straight forward that collecting Borgs feels like a necessity, because if it was so easy why wouldn’t you do it? Plus, there are some pretty sick ass designs so who can’t resist?

It’s not all in Japanese, these are just the only screenshots I can find.

To be honest, lots of people could resist. A big problem Gotcha Force has is that it might only be enjoyed when players are in the right mood. It’s easy to see people getting bored of the game’s basic approach, and getting tired of the ridiculous volume of everything.

But it must be said, Capcom gave it a right go and despite some technical shortcomings and all I’ve said, Gotcha Force remains, to me, one of the more fun and playable games out there, as the positives overwhelm the negatives.

Gotcha Force is really stupid. It’s easy, technically poor in places, and quite repetitive. But what the hell, it’s damn fun. I mean, I can’t manage the six-hour plays of this game that I used to, it’s simply too repetitive, but in little slices, it’s an explosion of ridiculousness and so it’s really enjoyable. At the very least, it’s unique, with a great air of variety and the opportunity for insane replayability; I can’t ignore what went wrong with it, really, now that I’m reviewing it. I’d really like to, because this is a defining game for me, but yeah, I’ve been as unbiased as I can be really. To someone without the nostalgia glasses I usually wear when I play this, it might be crappy. But I can’t ignore what I love about it. Because, in the end, the positives pretty well cancel out the negatives for the most part – although there are some inescapable factors.

Pretty mixed scores all around. Got a couple of 8/10s and a couple of 3/10s, usually about a 6. I think people were generally okay with it.