Posted on December 2, 2016 by Van Rockingham — Leave a comment

I am going to do a top Light gun Games list soon, and to do that I want to get a few games out of the way. So apologies to the many people who don’t like On-Rails shooters as much as me.

Gunfighter 1 was a really slow Time Crisis clone, it looked like shit, and didn’t play much better. And since I am coming close to the end of collection of Light Gun Games it was a case of barrel scraping, and seeing what is left.

Gunfighter 2 is a Light Gun Game, and it is on-rails. You use a Time Crisis-esque duck button to take cover and to reload, and you shoot things dead. This time around there are branching paths, but these don’t really offer variety, as it is simply shooting the same enemies from a different angle. There might be more of them, but I only found 3 branches, and two of them are on the horse/mine cart sections.

Even the name of the level annoys me!

There are very few bosses, but this is made up with the differing style levels. Level 3 and 5 are effectively car chase levels. 3 has you on a horse chasing a carriage, and 5 has you on a mine cart escaping other mine carts. I hate mine cart levels, and is the only blight in Donkey Kong Country.

The final level is also different. On easy it is fun. On medium or hard it is punishingly difficult. Here, you walk through town, and you shoot as you’re moving. You can’t duck, and you simply reload while shooting. It is action packed, but the RNGesus really cheeses you here. Enemy fire is fairly random, which is fine, but on this section enemies will shoot you while they are off screen, or while they are on the edge. Meaning you’re light gun can’t get them. I got to this point on hard without losing a life, and then burnt through all 4 lives and then 6 continues on this section. If it wasn’t for this the score would be higher.

After this level is a showdown with the final boss Bob Younger. Clock strikes noon, and you shoot him. I enjoyed it in Gunfighter 1, less so in Mad Dog McCree, but as final bosses go it is fun. If a little too easy.

Again, unlike Mad Dog McCree, clear instructions that tell you what the hell you’re doing!

I complained in GF1 that the game was a little brown, and that the enemies had been palette swapped (blue guys were hard). In GF2 everything is more brown. And it actually works.

All the enemies are dressed like cowboys, and you know what? Cowboys wore brown… Other than a few elite men who are easy to spot, everyone else is just a cowboy. So they are not colour coordinated. Instead you get an incoming bullet warning. It isn’t as obvious as the glowing red bullet in Time Crisis II or the red reticle in Crisis Zone, but it is a flash of yellow that you should spot.

The game is still a little slow, enemy fire is slow as shit, and too easy to dodge, and a lack of bosses mean the challenge isn’t really there (exceptinsta-gameover and final level). 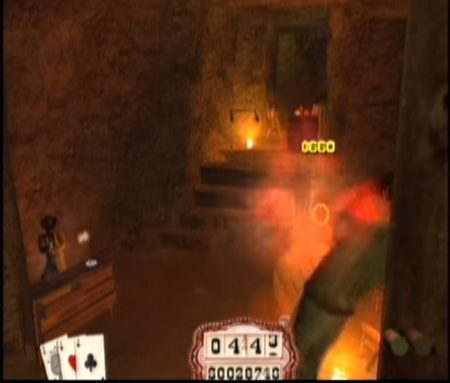 It wasn’t just the 7th console generation that overdid it with the brown spectrum.

Is pretty much the same as GF1.

This time round, you’re robbing a bank with your partner Bob Younger. Bob betrays you, and kidnaps Zee (your girlfriend). You bust out of town, follow a train, go in some mines, and then attack a different town. 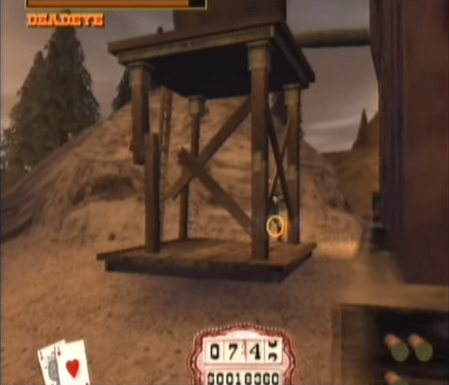 This is a boss fight!

GF2 is a really fun game, that is only let down by a frankly stupid sudden difficulty spike on the final level. The RNGesus is simply too random here to be able to plan, and since you can’t take cover you are totally at the mercy of the gods. I can rock a 80% accuracy in this game, and when that isn’t enough for this section you’re simply fucked.

Great game, let down by the difficulty.

Cons: Game still feels a little slow, the Showdown level is too hard