Originally release in 1995 as Tyrian, Tyrian 2000 is a slightly updated version (with the an extra act) and some bug fixes. It is also freeware, meaning you have no excuses not to play it. I personally went for the GOG.com version, because I love GOG and it’s out of the box DOSBox working goodness.

Anyway, I wasn’t planning on reviewing this; but after playing it on my lunch break, I slowly got into it and found there to be a very fun game at its core.

Tyrian 2000 is a scrolling vertical shooter. So the screen moves upwards, and you shoot or avoid the enemies as they enter the screen. Unlike other games such as Capcom’s 1942 there is no one hit death. (I can’t be arsed reviewing it, so here is a link to The Well-Red Mage’s review).

You have a rechargeable shield (blue bar), which will recharge if your generator is full (red bar), and and armour bar (brown), lose both, and you’re dead. Armour doesn’t recharge, but if you are low, then you will usually have an armour pickup spawn. One of the items you upgrade is your generator, and if you choose over-powered weapons (that drain the generator), you’ll have to stop shooting to be able to regain shield.

You start the game with piss poor weapons, and just a slim hope of surviving. Survive long enough, and earn enough money, you can upgrade your ship.

Once fully upgraded the game starts to be comical. You are no longer trying to “just survive” you are suddenly trying to get high-scores, or even better. The fabled 100% on a level. I got a 99% once.

Once your ship is upgraded it is almost impossible to tell what is happening. The screenshot above, that is just MY fire. Complete the game on normal, and you unlock a fucking Carrot. But your carrot fires bananas! And the Bananas are Worms levels of destructive. This is where 100% becomes slightly more possible, but the most fun is in trying the ever increasing difficulty levels. Beat it on hard (i can’t beat hard) and you can unlock Impossible, Suicide and Lord of Game.

On hard you have a restricted field of view.

Fucked if I know what is going on. You are told via cutscenes, but most of the story is obtained through collecting “data” in levels. This data unlocks sections of story, which you can read at your leisure. But copy and pasting from Wikipedia:

The game is set in the year 20,031. You play the role of a skilled terraforming pilot named Trent Hawkins, who is employed to scout out habitable locations on newly terraformed planets. His latest assignment is the planet Tyrian, which is located near the territory of the Hazudra, who are a lizard-like race.

One day, Buce Quesillac, a Hazudra and Trent’s best friend, is shot in the back by a hoverdrone which quickly disappears into the sky. Buce lives just long enough to tell Trent that the attack was the work of MicroSol, the giant corporation that controls the terraformation of Tyrian. They want Buce dead because of his knowledge of Gravitium, which is a special mineral, unique to Tyrian, able to control the force of gravity.

Microsol want to use Gravitium to power their warships, which could result in them becoming nearly unstoppable. They will stop at nothing to eliminate anyone who knows of its existence. Trent is the next person on their hit list, and Buce implores him to try to reach Savara, a free world. With that, Buce dies. Trent manages to secure a small fighter, and departs for Savara.

The only thing out of that information I knew was that Buce was dead. I never once noticed any of the other things mentioned… Oh and Buce really is his name.

There is an arcade mode, that’s alright… Rather than earning points to buy better weapons, everything is done as a pick up in the traditional arcade way. But I prefer the “Full Story Mode”.

There is two player mode, which I can’t get to work. This apparently lets you Power Rangers your way to victory. IE, you are both flying your ship and shooting shit. But you can merge and form Mecha-Streisand forming one giant ship called “Steel Dragon”. Sounds fun, but I don’t think this feature exists anymore.

And a tonne of bonus missions/levels. There are a lot of Space Invader levels, that will just loop over and over until you beat it. But there are also joke levels where you just “collect the beer”.

To be honest I totally lost track of what is going on, there are so many levels, bonus levels, and secret levels, and additional paths that I totally lost track of what the hell was going on. Especially on Episode 5 where the Banana King decides to attack you. I honestly don’t know if this is the proper ending. (Oh, spoiler warning…). Things just happened, and I was enjoying playing the game enough for this to not matter. 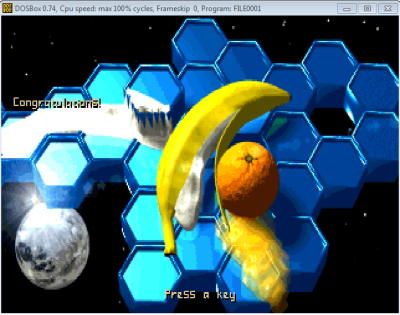 What?! That’s the endgame splash screen!

Tyrian 2000 is a very simple game, and it does it well. The difficulty is insane on the harder difficulties, but the casual will have enough fun plowing through on Medium. The unlocks and the differing paths offer a tonne of replayability if you want to just dick around. Replaying mission 1 with the fully upgraded carrot ship allows you to take out your earlier frustration on things for being too hard. And as mentioned, if you’re a sadist, there is always “Lord of Game” mode.

So since it is free, and takes around 4 hours to beat, it really is worth your time. The score would be higher if there was more to it, but as it is. Tyrian is probably a perfect example of a Vertical Shooter.

Cons: HARD AS FUCKING HELL, the sound FX are pretty annoying without the music on.

Urrrm. Tyrian was well received at released scoring 87% in PC Gamer and was praised for the ability to save the game…