I have promised myself I won’t buy any more games until I make a significant dent in my backlog, and with the recentish news of Grand Theft Auto: Horse Edition 2 I thought I’d go back and see what started it all.

Grand Theft Auto is a 2D top down open world action/crime simulator, and early precursor to Sandbox games. You are relatively free to do what you want, and your aim is to score enough points to move onto the next level. You do this through completing missions; obtained from phoneboxes, random mission cars, or getting points from committing crimes.

As you complete missions or find bonus crates, you will gain extra points multiplier, get the maximum (5), then, if you go on kill rampages, you’ll rack up points so quickly that a single tank related adventure will see swifly move onto the next city. There are 6 levels and 2 for each city, which breaks the game up into smaller more manageable chunks.

The 3 cities are Liberty City (very closely based on New York), Vice City ([loosely based on] Miami), and San Andreas ([best of] Los Angeles) but the city design isn’t the best. The layout can be very confusing on all 3 cities. You are encouraged to use the maps until you learn the level, but it does still stink a little of poor level design how frustrating navigating can be. Having said that, each city is choked full of secrets, encouraging a thorough rummage.

The controls take some getting used to as they use heavily bastardised tank controls. You press X to move forward, Triangle is reverse, Circle attack, Square enter/exit vehicle, plus the shoulder buttons for weapon change, handbrake, fart/car horn etc. It takes a while to get used to it, meaning running and driving around can be difficult at first and you’ll be getting in and out of cars instead of reversing/shooting. But once you get used to the controls it starts to feel a little more natural, but always remains on the clunky side.

The topograpgy of the maps and areas are fairly accurate to the original cities. Image knicked from Imgur

From what I can tell there really isn’t any difference between the Console and PC versions. On the PC version you got 8 (instead of 4 playable characters), with all the female characters removed from the console versions.

Grand Theft Auto falls into that category of game where it gives me a headache if I play for too long, and this is mostly because the camera will annoyingly zoom in and out, and jitter. The camera will zoom out if you’re going faster, and zoom back in when you slow. Or if you’re going full pelt in a fast car, the screen violently shakes as the camera tries to decide what to do next. If you’re doing large loops of a city on the long fast roads, it’ll make you feel queesy. 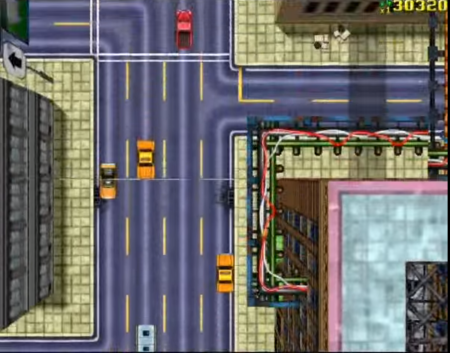 Grand Theft Auto is fun enough in short bursts, and having 6 short missions caters to this well. After that, the main reason to play is to create carnage and fuck shit up, and this gets very boring very quickly. There isn’t much variety in weapons, so kill sprees get a little boring, especially after the Tank blows up [it doesn’t respawn], so having 5 lives starts to feel redundant when all the fun things are gone after first use.

Adding in the induced vertigo from the constantly jittering camera means that the original Grand Theft Auto isn’t really worth a visit. It is decent enough in short bursts, but falls into the more meh, than good.

This game was a fucking big deal, but it was released to largely mixed reviews and holds a 68% score on GameRankings.