Posted on November 4, 2016 by Van Rockingham — Leave a comment 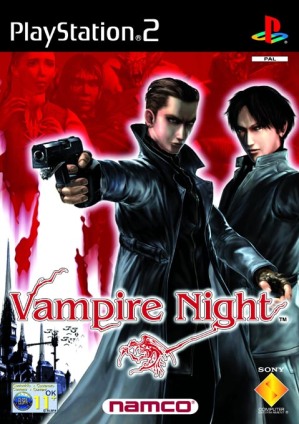 I’ll be honest. I only played this game so we would have a V letter game in the Archive, and the eagle eyed reader may spot the error in that reasoning. A few months back I bought about 25 light gun games as part of a bundle and Vampire Night was one of the random games simply making up the numbers.

So going into a game I have never heard of, never saw in the arcades, and only a simple love of Light Gun Games to motivate my venture into, what is apparently France in 2006, I dived headlong into Vampire Night.

Vampire Night is an uninspired House of the Dead 2 clone. The dialogue makes HoTD2 look Shakespearean, and the shooting is a little fiddly, not broken, but not crisp.

The dialogue is poor, and the voice acting is worse. I still don’t think the first two HoTDs were intentional in the crapness of scripting, and I won’t cut Vampire Night any slack on this either. For 2001, and PS2 era, you’d expect a much better job on the dialogue. There are even a couple of instances where the voice actors will change their voice mid sentence. It sounds like the VA forgot their character and adlibbed a voice, it is very sloppy [link to dodgy voice].

There are branching paths, where if you achieve the criteria, you will go a different way. These are not all obvious, but they are usually connected to the annoying little girl that follows you (Caroline). She will often get herself into trouble. and if you are too slow (or quick) you will go a different route. This is either because she gets kidnapped, or falls down a hole.

On 3 playthroughs I triggered 4 or 5 slightly different paths, so there is some replayability involved in finding these routes, but it isn’t obvious how/why this happens.

Apparently, these are called Michel and Albert, but I honestly don’t know

Vampire Night is different, in that the enemies have health bars. Most can be killed if you hit the sweet spot, if not, they will usually require 2-3 hits (more on harder difficulties). It can be a little frustrating at first, especially if you’re used to other Light Gun Games with one hit dead enemies, but the health bar is a standout feature…

The enemy design is certainly more interesting than the standard “bloke with gun” or *yawn* zombies. Having dudes with swords and battle axes is certainly a change, and the developers do a great job of making sure the Vampires don’t look like generic zombies. 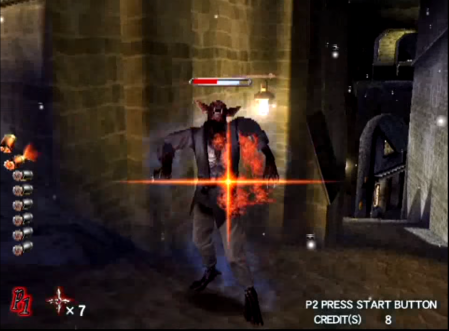 I understand you may disagree, but this is a cool enemy design.

The bosses are both a blessing and a curse. They are initially fun, and have some very cool ideas thrown in, but they drag. Each level is 7ish minutes long, 3-4 minutes of this is a boss fight. It means the cool idea, quickly becomes a chore. Add in changing forms, and scripted events to boss fights, it makes the fight a war of attrition.

One aspect of boss fights I enjoyed was the “red health bar”. The boss has a blue health bar, for health. They then get a second red bar, which is related to the attack they are about to perform. If you burn through the red bar, you will stop the attack. It means the skilled won’t suffer too many cheap hits, and the less skilled understand why they took damage.

Having said that, the red bar doesn’t always stop an attack, and it is VERY frustrating when you burn through the red bar, but an attack still occurs. Stupid bug. 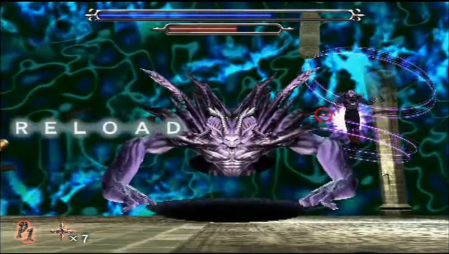 Credit where it is due, this is a fucking cool boss fight

15 minutes are taken up with boss fights equating to 43% of the game being spent on bullet sponges.

This leaves around 11 minutes for the actual levels. All of this makes the game terribly paced. The level design and the enemy design are all good, but they are so under used it is comical. 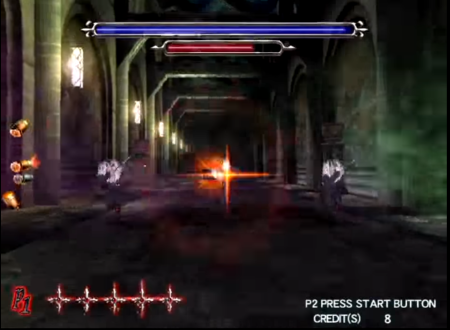 I could have spent more time comparing this to House of the Dead, as there is so much obvious homage to it, but that would be suggestiong Vampire Night is on a par with HoTD. Like HoTD2 there is a “Special Mode”, which is Arcade Mode with pick ups. You unlock pickups from Training Mode, and you get money in game, to buy stuff from a shop. Yes, these are technically RPG elements, but they are a waste of time. Just play arcade mode, and set it to easy/normal/hard and however many lives you think you need. There is no reason to grind Training to get the items for Special. Training is fun, and should be tried, but Special is a waste of time.

Ultimately, Vampire Night isn’t a bad game, but it does feel hollow. The shooting isn’t bad, but feels off, and the boss fights are bullet sponge-athons that are not as fun as they should be.

Time Crisis is my benchmark for average shooter. Vampire Night is worse, and can safely be ignored.

Cons: L O A D  T I M E S, Weird mix of skippable and unskippable cutscenes, your bullets seems to move slowly at times, the oddly moving projectiles on Stage 3. “Sir Vampire”, apparently there is a story

Scoring 7 out of 10s across the board in 2001 Vampire Night was not so enthusiastically reffered to as “good”. 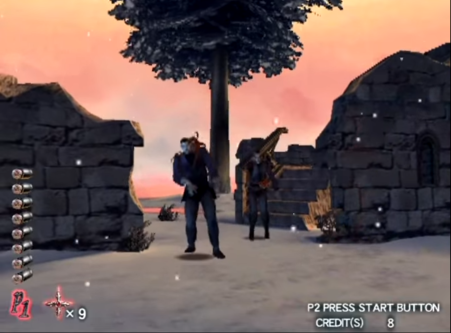