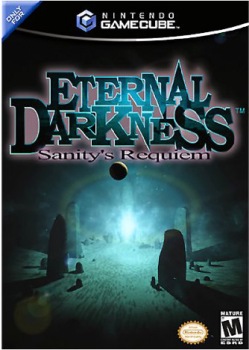 It is fair to say Eternal Darkness wasn’t the most commercially successful game (less than 500,000 worldwide sales). I guess some of the blame can be put at the feet of Nintendo, as the Gamecube wasn’t the most popular system. But primarily I blame gamers.

Eternal Darkness is one of those examples of a great idea, with a novel setting, and implemented well. But since it was on the Gamecube, and wasn’t a Zelda or Mario, it didn’t sell as well as it should.

So, fuck you people that bought games in 2002, you’re the reason we aren’t allowed nice things.

I’m jumping in headfirst with the Sanity Meter, because it is awesome. When you see monsters you lose sanity, lose enough sanity, and weird shit happens. If you haven’t played Eternal Darkness, think of the Scarecrow bits in Batman: Arkham Asylum. Random shit will happen. Blood drips from the wall, loud bangs and bumps scare you, bugs crawl on the screen, blue screen of death, “instadeath”, memory cards wiping. It all happens when your sanity drops. It can be hard knowing what is real and what isn’t on a first playthrough. It is such a fun mindfuck, and is the standout feature of the game. 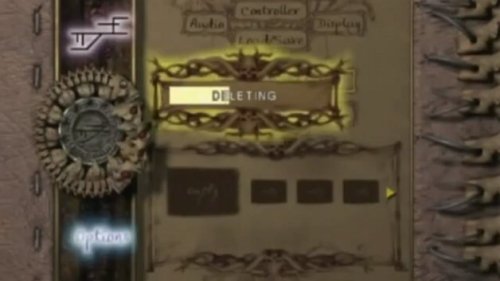 I’m not going to add spoilers so:

You’re going backwards and forwards in time visiting chapters of the Tome of Darkness, and living the lives of the people featured. It will take you from 0AD to 2000AD. You’ll go from puzzle sections around the Rovias Mansion, where, once you solve a puzzle, you’ll get a book chapter.

Read the new chapter and you’ll be transported to the time of the chapter, and control the person in the chapter. It means you’ll control 13 different people on your journey. Some of these are one off characters, but most will appear in some form or another in different time periods for various reasons.

Nothing makes sense initially, and everything seems unconnected. But as the story develops, as you travel closer to home, these random encounters start to reveal the underlying story as you connect the dots. Though I still don’t know what the Montorok is. 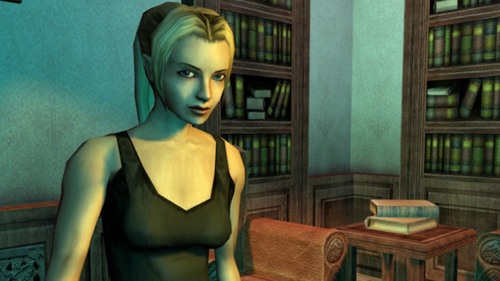 Eternal Darkness does things differently to the other Survival Horrors we have played, it combines Silent Hill and Resident Evil with a little Parasite Eve style magic thrown in. Meaning it has the action orientated experience of Resi, but with all the psychological fear from Silent Hill. Adding in a fairly in depth magic system, it offers the best of the genre at the time.

There are no tank controls but your movement is context specific similar (similar to Metal Gear Solid), it is fluid once you get used to it, but can be a little awkward at first. You can aim your attacks based on body region (head/arms/body) using the aim button, or you can slash away maniacally, it is very intuitive to learn, and if you become adept, it’ll allow you to cause carnage as you rampage around.

Aim for the head, life is easier if they don’t have heads…

Once you beat an enemy you can then “FINISH HIM” and put one last bullet into them. This isn’t required, but will allow you to regain some sanity. It can be a pain though, especially with the time it takes for a melee weapon to kill and the scarcity of ammo.

The Health/Magick/Sanity (and stamina) meters are different for each character, so they all controls differently. The first you will notice will probably be the stamina, some of your dudes are on the portly side, so run too much and they’ll be huffing and puffing having borderline asthma attacks (Dr. Maximillian Roivas). Others, are melee tank gods (Michael Edwards) with a shit tonne of health, meaning they’ll be able to fight loads, but suck donkey balls at magick . It forces you to play differently with each character, so that no two scenarios play exactly the same, and adeptly trains you for the major boss fights.

I have two issues with the game, and both of them are the Magick.

Magick sucks. Specifically how you learn higher magic spells. You get a scroll which tells you what “runes” makes a spell. But when you get the 5 rune and 7 rune spells, rather than just learning the previous spells, but harder, you have to rebuild all the spells. It is a damn chore. As a 5 (or 7) spell is the same as 3, just with more “power” runes. It means you have to remember what runes made what spell, and then add 3/5 more power runes. It takes too long and should have just been “THIS SCROLL UPGRADES YOUR SPELLS”. If you are new to the game, you will need a guide to figure this out, as the previous spells are learnt through trial and error combining, or through eventually finding the scrolls scattered throughout the game, but rebuilding higher level spells just isn’t intuitive and is required for some puzzles.

Using Magic is my second issue, casting is fine and I understand why it “casts”, but my issue is the using as part of a puzzle that is infuriating the first time you play.

This spell is obvious, others less so.

When you complete the first Chapter you choose a rune, at the point of choosing it isn’t made clear what this means, but later in the game it becomes clear. Magic works in a R-G-B-R-G-B Paper, Scissor, Rock loop. Red beats Green, Green beats Blue, Blue beats Red. Makes sense, and is simple to figure out. But it takes a while for you to realise the choice you made in Chapter one means the colour of spell you need to cast. 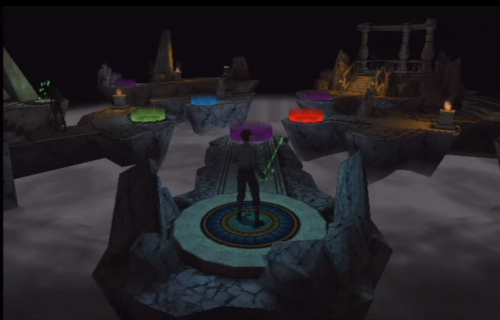 I still don’t really understand the point of these bits

When you come to a room, and can’t figure out where to go, it usually means you have to cast a specific spell in a specific place, and with 12 spells, and 3 (4 if you find special) Alignments, with 3 levels of power, it means there are at points potentially 144 different spells you need to cast to figure out which one you need. And since you don’t know which one to cast on a first playthrough it is a pain in the fucking arse cycling through them… So many of these require prior knowledge, or memory of a small detail from earlier in the game. Casting reveal invisible is easy, but knowing you need to shield, reveal, bind, and enchant for some sections is Nintendo Power style fuckitude; you need a guide.

The puzzles should be commended for not being box pushing, but it can be annoying especially on first playthroughs learning the fairly unintuitive magick puzzle system.

I was going to write another section exploring some of the time hopping, but I don’t want to put any spoilers in this review. There is no major reveal like in Silent Hill 2 or Silent Hill 3, or obvious “he was the badguy” moment like Wesker/Weskerclone in all Resident Evil games, but the way in which the story develops, how it slowly builds and links in is best experienced fresh.

It took me 12 hours to beat the game first time, I know this is slow, and a speed run is circa 2 and a half hours, but there is plenty to see and do. You can get alternate endings by beating the game 3 times by choosing the different dominant magic in Chapter 1, and there is the hidden 4th magick which adds some nice spells, so there is a tonne of reasons to replay the game.

The puzzles do affect the score slightly, as it can be infuriating figuring out what you’re supposed to do, but essentially, Eternal Darkness is a great game and it is a tragedy it didn’t sell more, or get the sequels it deserved.

Cons: Karim not telling his woman to jog on, Not adequately explaining the Augustus Rune choice, Unskipable cutscenes, Magick