So we like playing horror games at Halloween. Go figure, right? As much as I would’ve liked to scribe my feelings about The Walking Dead Season 2 (seriously, fuck you Kenny), it would’ve been a copy and paste of the first review, only with different – and very spoiler-y – feels. So I decided to tackle something different this year, and now I can’t sleep with the lights off. Or on. Or at all.

Released for the PC in 2013, Red Barrels’ Outlast is a spin on survival horror that allows you to embrace your inner coward – by running away whilst freely spraying human waste down your legs at every opportunity. It achieved both critical and commercial success, as well as being ported to both PS4 and Xbox One in 2014.

You play as Miles Upshur, a journalist who has been tipped off to some shady goings on at the Mount Massive (teehee) Asylum. Hilarity ensues. Wait, no. It really, really doesn’t. What greets him as soon as he arrives would be enough for anybody else to throw their arms up in the air and shout “fuck this, I’m out!”; but Miles is a nosy wee bugger, and he deserves everything he proceeds to get. You see, the inmates have been driven further into madness, and (amongst other things) been experimented on by a mad surgeon – who is just charming, by the way. And none of them are very happy to see Mr Upshur.

NO SIR, NO THANK YOU. YOUR BEDSIDE MANNER LEAVES MUCH TO BE DESIRED, SIR.

It’s not the best looking game you’ll ever play, nor is it the worst. But what Outlast does an admirable job of creating, is atmosphere. A hideous, claustrophobic, crushing atmosphere. The sort of atmosphere where you keep asking yourself why you’re even still playing this. Lightning crashes and flashes outside, patients wail in agony and threaten you with the utmost malice, and the varying reliance on night vision creates a wonderfully scary Silence Of The Lambs feel to some of the slower parts of the game.

Outlast is, essentially, an FPS without the S. You don’t have any weapons, nor will you ever get any. All you can do is run and hide. You have your video camera, which you need to use to document the horrific proceedings, as well as finding your way through the darkest depths of the asylum. If any monsters see you, you’ve no other option but to leg it. The funny thing is, this is actually quite thrilling; almost like the adult version of ringing a doorbell and running away. 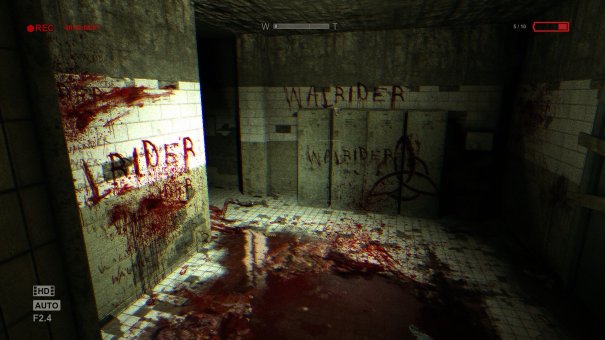 It’s not the blood or the threats that bother me, it’s a respect issue. You wouldn’t treat your own house like this, would you? Stop stabbing my armpit.

Unfortunately, this does mean the gameplay is very one-note, and some of the major encounters can prove extremely frustrating after a few failed attempts as you try to somehow goad the slightly choppy AI in your direction. The idea that constantly hunting for camera batteries would be fun is also something of a misnomer – you can’t take something as dull as plodding around the house for batteries and make it fun by threatening murder. Outlast is also a very short game, taking roughly a meagre five hours with little to no replay value. On the flip side though, Outlast is also pretty dang inexpensive, and we’d be amazed if you pay more than 7 quid for it.

As a game, Outlast is somewhat flawed and clunky; but still worth playing. As an experiment, Outlast is admirable in its desire to break the mould by insisting its bizarre rules on the player. As a straight up horror, Outlast is a must-play macabre masterwork, pushing you to the point where you’re not sure if you can bring yourself to keep playing for fear of what lies beyond. If that sounds like your cup of murderous tea, you owe yourself the opportunity to play Outlast. Anyone even slightly squeamish best not bother.

Pros : terrific tense atmosphere, some belting voice acting, intriguing story, the nifty little animation where Miles puts his hand on the wall as you peer around corners.

Cons : very short with little to bring you back, can often be frustrating, the AI is sometimes just plain dumb.