Peering into the time machine that is Retro Gaming will often produce weird feelings. There is no denying that the PlayStation was a success, however, when you look objectively at the launch titles for the European release you’ll honestly wonder why ANYBODY bought the PS1 at release. In Europe we got:

As launch titles, it isn’t exactly an exciting list (certainly not in retrospect) and I can understand why my parents waited a year and got me a Die Hard Trilogy/Destruction Derby bundle for xmas 96.

Ridge Racer is a checkpoint racing game originally released in 1993 for the arcades, where you hold down accelerate and occasionally have to turn.

While the graphics are actually pretty good, the gameplay is lacking. There is one course, with one variant, and mirror track(s), you can choose Novice, Medium, Advanced or Time Trail, beat all four you unlock the mirrors and some extra cars. You can choose manual or automatic transmission, and a different car. Each car handles slightly differently, and it is noticeable as you drive. Some cars are faster, some have better acceleration, some handle better. My tactic is to pick the one with good handling/cornering and never let go of accelerate. But Ridge Racer does a decent enough job of mixing up the car styles to suit preference. 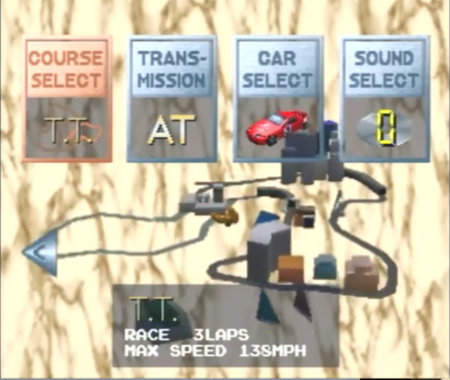 This is pure arcade experience racing, in the sense of, “don’t expect ANY realism”. If you crash, you’ll bounce back and only lose a marginal amount of speed, other drivers rubber band so you’ll never be too far from an overtake. It only took me two attempts at Advanced to be able to beat it, meaning I had effectively completed the game in 7 minutes.

It isn’t worth it. The data doesn’t save (laptimes do), but I can’t be arsed doing Easy and Normal everytime I want to drive the Devil car. 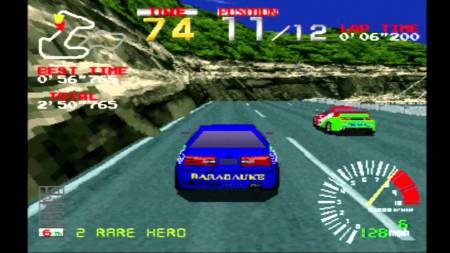 I have to wrap this up as I have a rule of I can’t spend longer writing a review than it took me to complete the game.

Ridge Racer looks nice, but the racing is boring. If we look at other games we have touched on on this site from the same year – Destruction Derby and Micro Machines 96 – those two games piss all over the Ridge Racer experience. DD has leagues, modes, tracks, physics. MM96 is a daft fun racer. Ridge Racer is a racing game with ONE track, and next to no reason to play for more than 10 minutes.

Ridge Racer isn’t BAD, but it struggles to achieve mediocrity.

Pros: It isn’t Terrible like Sonic R, being able, being able to play Galaxian while the game loads

Ridge Racer was an inarguable smash hit back in 1995, scoring critical acclaim based on its then state of the art graphics and responsiveness (though opinion was decidedly mixed on the soundtrack). Critical success transferred into commercial, with enough copies sold for Ridge Racer to be amongst the first games released in the Platinum range.