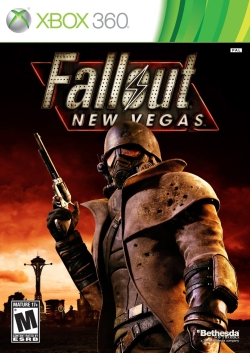 I didn’t like Fallout 3, it wasn’t bad, but it was very Jekyl and Hyde with too much filler. I hated that I had 100 in speech and would still lose speech challenges, and I found the main story pretty meh, so as a result, I sat on this game, and never bothered to play it properly.

But after blasting through Fallout, and Fallout 2, I thought I’d give New Vegas a chance.

So, do I hate New Vegas and where does it sit alongside the other games in the series?

The story isn’t great, but I do like it – there is no pretence. Bloke (Benny) shoots you (The Courier) in the head, and you set off to get revenge, while trying to discover information about the mysterious package you were carrying.

I complained in Fallout 3 that the story was really short, and it would be remiss to not mention that New Vegas is even shorter. However, New Vegas‘ story rewards you for going the extra mile.

Fallout 3 had lots of unconnected side-quests, and for the most part, they were good. But what New Vegas does, is it has more side/additional-quests that are directly connected to the main quest. There isn’t an allusion of freedom, you are actually free to do whatever you like storywise.

With the amount of possible character rolls, it does add dozens of different possible outcomes to any situation.  Which ultimately results in around 130 variations to the games ending (spoilers in link). This is MASSIVE, and obviously better than the binary decisions in Fallout 3. It makes New Vegas a larger game, despite the much shorter story..

There are FOUR story endings, but even within those 4 there are half a dozen variations on each side. Meaning there really is a shit tonne of replayability in New Vegas if you want to experience everything.

Now, since I have done this in the other Fallout games, I re-created Aids Burger; the speech/Science god with a penchant for Melee combat. If he doesn’t talk you into doing what he wants, he will remove your head with a sledge hammer, get addicted to jet, and bang a whole lot of hookers. 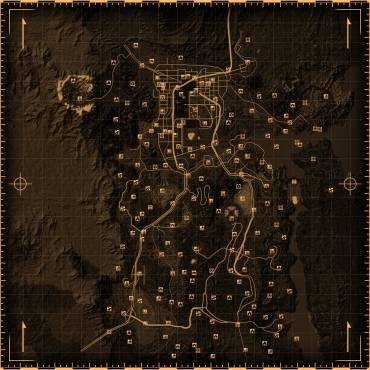 While New Vegas was developed by Obsidian, the game plays exactly the same as Fallout 3 and uses the same engine. You play in either 3rd person perspective or first person, punching and shooting your way in real time, with the magical VATS button which will give you the temporary ability to better aim shots for damage boosts.

Thankfully the VATS system is a little more refined than in Fallout 3, and it doesn’t break up the combat as much as in the previous game. 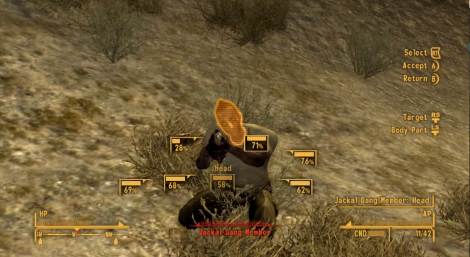 Why Fallout: New Vegas is a better game than Fallout 3

I really struggled with Fallout 3, it did a lot of things well, but for me, the story sucked, and you spent too long in generic tunnels.

New Vegas doesn’t actually do much different in terms of the story and you can argue the story is just as bad, if not worse. But for me, I enjoyed the lack of direction. Dude shoots you, you angry, go forth and do what the hell you like. Fallout 3 had you chase your dad, and he dies 3 seconds later and was pretty much the Fallout 1 plot. In New Vegas you can ignore him for 90 hours while you explore and do other things, or you can charge in and take no shit from no one. There is no pretence going on, you are motivated by revenge, but the depth comes from the player and their desires. It feels like a good Zelda game such as Link to the Past, where you’re being rewarded for exploration, rather than being forced to explore for box checking/game padding purposes. Fallout 3 had freedom, but the quests didn’t really have payoff, or build up to a bigger picture in the way New Vegas does. This aligns New Vegas very well with the earlier games in the series, as you have a larger purpose in the wastes.

The major Karmic choice doesn’t boil down to one shitty line of dialogue about your dad being disappointing. And the ending isn’t based on one crummy decision you make before the credits roll. In New Vegas Karma works like it does in the original Fallout games, you get a reputation based on your deeds for each settlement you visit. So you can piss off NCR or the Brotherhood, and still maintain a good Karma level or reputation around the Mojave. You aren’t trapped in a binary good/evil character, you can be a shit in one town and a hero in the others based on what storylines you want to follow.

Speech/Barter/Science challenges in a conversation now work. It annoyed me no end when I would randomly lose a speech challenge with 100 speech. In New Vegas they have fixed the system, and it tells you what you can do. If a dialogue option says [Explosives 15/50] it means you are short that skill, if it just says [Explosives 20] or [Speech 80] you will succeed in the dialogue choice. 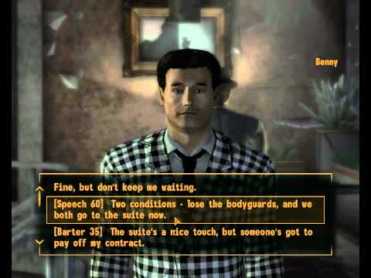 Achievement-wise, New Vegas works a little better too. You no longer have to play the game 3 times to get three karma endings, instead you get achievements based (mostly) on the quests. This gives me much more reason to play the game again. It means I can still play the game as a Melee Speech god, but still experience a completely different game as I ally with different factions, and therefore receive different quests. It doesn’t come down to simple be good/bad choices. and grinding to level 30 3 times.

I don’t like the character creation, or the how you gain your stats. The G.O.A.T testing in Fallout 3 was brilliant, and I felt it was a really novel way of creating your character. Here you wake up, and say “I think I was this S.P.E.C.I.A.L“, it isn’t bad, and it makes sense to the story, but I really enjoyed baby to adult section in 3.

After completing the testing section, I over-ruled the results, and chose the stats that I wanted. I didn’t find the questioning as intuitive as in say Jagged Alliance 2, and nobody understands inkblot shite. As a result the things you think you’re deciding on don’t really come out in the end product. 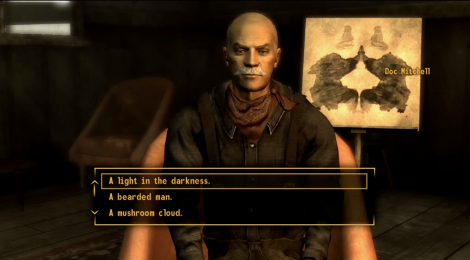 The load times are painful in New Vegas. Like in Dead Rising 2, it can really break the flow and annoy you on back and forth quests especially when doing the questlines such as “The Kings” quests, and the Rex companion stuff where you back and forth between sections of the New Vegas Strip.

I loved New Vegas, it kind of sorted the issues I had with Fallout 3. However, the main reason I prefer it, is that it is a direct sequel to Fallout 2, you can meet up with Marcus from 2, Cass the companion is the daughter of Cassidy a companion in 2, events from 1 and 2 are discussed, and the game continues with the NCR story and their expansion eastwards. If you haven’t played the previous Fallout games you are not at a loss, but small lines in dialogues make connections you might have missed. Knowing the 1 and 2 story, and some of the previous games events will add a lot of background information. So in that respect I am glad I decided to wait until I have played 1 and 2 before playing New Vegas.

The ending for me is as powerful as The Walking Dead Season 2, where you make a decision about Kenny. You know the flaws, you choose to like/hate them for it, and it all adds depth. Something that once you dig past the surface Fallout 3 lacked.

I don’t hate Fallout 3, it just wasn’t great, New Vegas is pretty awesome, and for me, is just as good as Fallout 2. There isn’t a stupid difficulty spike towards the end, exploration is encouraged, and with over 100 possible outcomes to your ending it gives so many more reasons to keep playing/replaying New Vegas that for me, other Fallouts lack.

You can complete the main story in less than 20 hours, but for the completionists, you’re looking at about 100 hours. While I won’t bother myself, it would say it is worth attempting.

Cons: No Dogmeat! Almost impossible for your companions to die. load times, cold dead eyes of NPCs, asking Cass to wait outside the room while you have sex with the sexrobot because you feel she is too judgey.

Though criticised for it’s wooden animations and overall gloomy aesthetic, New Vegas was another hit for Obsidian; even though it made next to no changes to the Fallout 3 formula. People wanted more Fallout, Obsidian gladly obliged. It’s supply and demand capitalism, wake up sheeple! *is rightfully dragged away and beaten* 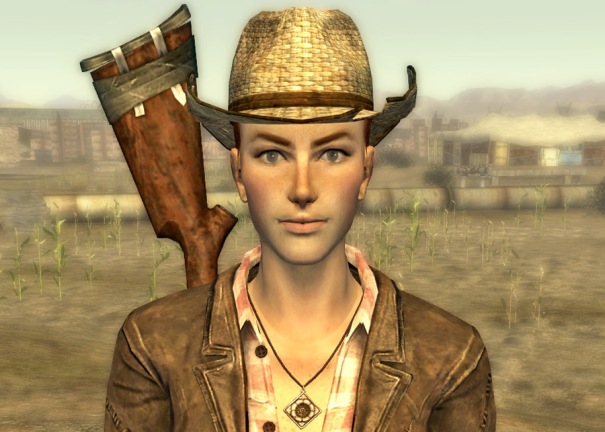 Cold dead eyes of an NPC will steal your soul!