The Oregon Trail is one of those games that is bafflingly creeping into top game lists, so when I discovered you could play it for free on the Internet Archive I figured it was time to take a trip… down a trail… Hopefully to Oregon.

Originally developed in 1971, and published in 1974 as an educational game for U.S schools by the Minnesota Educational Computing Consortium, Oregon Trail went onto wider fame with its 1990 release on the Macintosh, and i’ll be honest, I had never heard of it until recently. 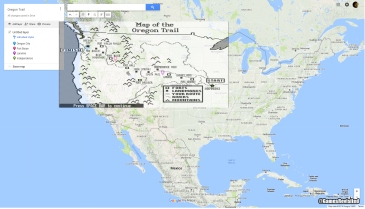 You are the Pioneer taking your 4 useless party members with you to the promised land of Oregon.

Your companions do nothing except eat your food. Fuckers. 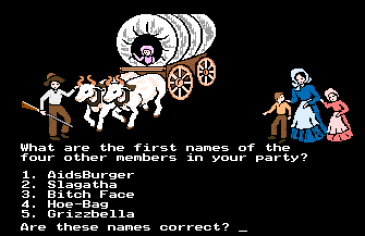 You can be a Banker from Boston, a Carpenter from Ohio, or a Farmer from Illinois. Ultimately, these are your difficulty settings, the Banker has the most money, making your journey easiest, and the Farmer is broke as fuck making the game pretty hard. These also affect your score at the end. The Banker gets no multiplier to his score, the Carpenter gets a x2 multiplier, and the Banker gets x3. Meaning if you are score chasing, the only way forward is the Farmer,

Before you set off from Independence, Missouri you buy your supplies from the merchant:

As the Banker, you can just keep buying all the shit you need. You can even pay for Sherpa to take you across rivers. As the Farmer? Tough shit, you can barely afford clothing. You certainly can’t afford clothing AND Oxen. This brings in the resource management, you’ll need a tonne of ammo for hunting as a farmer, and then buy what you can. Think now, as you’ll probably need to trade along the way, but if you don’t have enough Oxen you won’t get to where you’re going, so do you risk buying an extra Ox, or do you buy some spare clothing to trade/change into or some spare wheels?

The RNGesus can be very tough as your travelling troupe succumb to snake bites, measles, or the cold. Hell, the little fuckers will even drown when your wagon crashes, or they die from Hypothermia if you don’t have spare clothing, and this is all pretty random. I played the same set up 5 times in a row just getting to Laramie before resetting, and each game had different events. Caulk the wagon across the river can end in disaster on the first river, the odds are low, but you can fuck your entire your game early.

Life is brutal on the trail…

The first few playthroughs I didn’t realise I could hunt. The next few I was the banker so rarely needed to, but once you roll the farmer you’ll be hunting every 30 seconds. This is where you discover how much of a murdering psychopath you really are!

You can only carry 100lbs of meat from a hunt, 1 deer is about 74lbs, a buffalo is 700lbs+ and a Squirrel is 3lbs tops. But you don’t care! Fucking waste the fuckers! Kill 1000lbs of food just for the fun of it, or to see the tears in the eye of the Sioux tribe as they see the rotting corpses of the 100 buffalo you murdered for fun! No room for quinoa eaters on this journey, it is roast buffalo testicles for you!

Once you discover you can actually move (press numlock enter) and you’re running and gunning Metal Slug style laying waste to the wilderness, it is simple, but is actually quite fun. Though in later versions of the game, over hunting results in a lack of animals spawning.

Oregon Trail is decent enough, I play it on my lunch break and you can beat it in 30-60 minutes (longer as the Farmer), but again, it is simple. There is replayability caused by the difficulty settings, and the RNG nature means there is variety in each game, but it shouldn’t be featuring in top games lists unless you’re going for the hipster factor.

There aren’t really any negatives to the game, it is simple as I keep saying but it is supposed to be.

Finally, it is a game, and it is educational, so it manages to tick both he boxes of GAME and EDUCATIONAL, something most Educational Games fails to do.

But again, it is simple.

Cons: there isn’t really any, the map is wrong…

The Oregon Trail sold over 65 million(!!!) copies, and was generally well received. It also became something of a cultural phenomenon, and taught many of us about the dangers of dysentery and carrying too much venison. 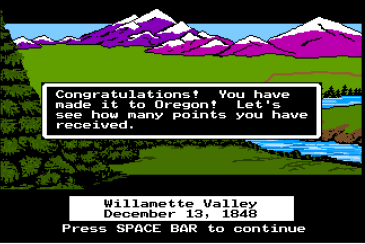 Typhoid really is a bitch!