Posted on September 13, 2016 by Van Rockingham — Leave a comment 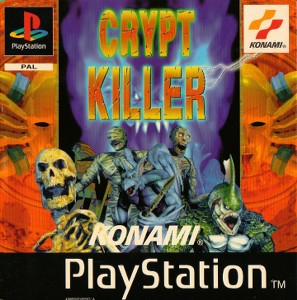 Circa 1996 I was in an arcade with some mates, and we discovered a light gun game that allowed three players, and the guns were SHOTGUNS, complete with pump action reload. This blew my 11 year old mind. We spent an entire day in that arcade and between us we will have sank £20 plus into the machine (it was around 25p a go). We saved and scrimped over the next week, saving our £1 lunch money, and doing odd jobs to scrape as much money as we could.

Finally, the weekend rolls around and we head off early to get to the arcade. The machine was gone, and we were devastated.

As the years went by I forgot about the arcade game, and couldn’t remember anything other than 3 players and shotguns.

Now in the distant present, I was simply going through a list of Light Gun Games that I didn’t own, and though “I pretty much own every other Light Gun Game, why not this one?”, and so, I accidentally stumbled on some nostalgia.

Crypt Killer is an on-rails-shooter, so you point a light gun at a screen and pew pew pew. What makes Crypt Killer different is the shear depth to the game. There are branching paths at the end of each level, and these paths affect the boss you will fight, and the ending you will achieve.

You get six stages, but only complete 2. You can choose any of the six, and do them in whichever order you like. Stage 1 will be different if you choose it as your first level or if you choose it as the second. This adds a surprising amount of depth, not just for a light gun game, but for a PS1/arcade title. Frankly, it is brilliant for the time and once you complete the game you’re able to carry on and beat the other levels for funsies and high-scores.

This means that there is a tonne of replayability, and more still, you get 4 different endings!

This is what I remember the machine looking like.

The endings are all fun, and my personal favourite is one of the joke endings where it all turns out to be the set of a crummy film.

There are also SIX different bosses, but they are not unique to a stage, as they all appear on one other stage, so they do repeat, and therefore you could select a route that would allow you to fight the same boss twice. 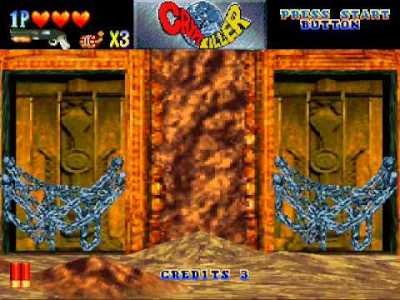 Shoot the chains to choose path. In two player you can fight over a direction.

Right, so on to the main thing that will make or break a light gun game…

The shooting is a little underwhelming. There is a slight delay between you shooting an enemy and them dying, and the best way to figure out if they are dead is to listen for the audio cues which is a little counter-intuitive. And until you get used to this, your accuracy will suffer.

The pewing isn’t broken like in Lethal Enforcers, but it isn’t as strong as Point Blank, or other games using the G-Con technology. My accuracy hovered around 65% in this game, and that is mostly down to over-shooting at enemies, rather than the Lethal Enforcers issue of poor gun support.

You are a “Crypt Raider” guided by a floating head (Galazon), and you’re seeking the “Eyes of Guidance” which will open the “Door of Fate“. That’s it, go shoot mythical creatures. 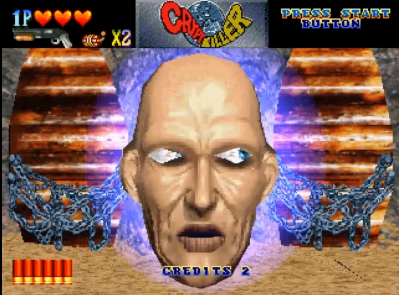 Crypt Killer is fucking hard! There are no cheats without a gameshark. Even using the option menu to set 3 lives and 3 continues, and difficulty to “easiest”, it still took me about 15 attempts to finally beat the game. Certain routes will have instahit enemies, and some bosses are unfairly hard with projectiles that can be very difficulty to hit.

Also with the maximum amount of lives I would still struggle to beat a single stage. A few times I died on the final boss, and one time I died with the final boss with him on 1/100 health.

The difficulty could be off putting to many, but it does a good enough job to stay on the fairer side of difficult if you choose the easier paths. Which allows people after some serious punishment, to choose the  ultra hard routes/bosses.

Other than Pharoah Head, they’re all fun.

Crypt Killer is fun, and there is a tonne of depth, both in paths you choose, and amount of endings.

However, the shooting IS a bit weak. If this was G-Con accuracy I would say the game is 85% kinda score, as it was using the older technology it does mean the score suffers due to slightly inferior shooting. It is still good though, and is probably the best Light Gun Game using the Konami Hyperblaster type technology, I like Area 51 and the Virtua Cops, this is better.

Pros: depth, loads to do, the music is pretty cool

Cons: shooting is a little weak, hearing the playable character shouting “WOAH!” or “LOOK OUT!” everytime an enemy appears